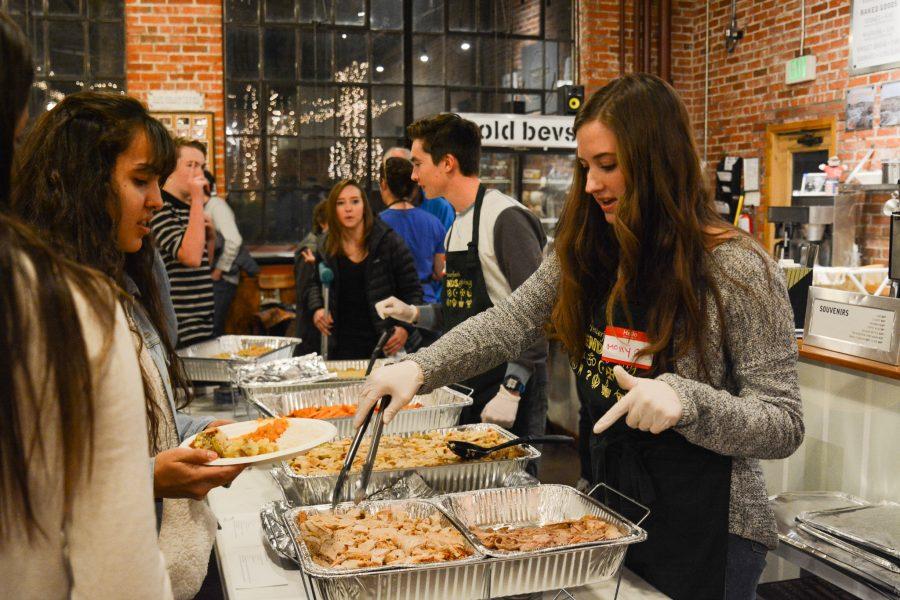 Looking for good food and conversation, a large crowd piled around tables and in corners of Everyday Joe’s Coffee House to talk about different religious beliefs.

“The spirit of tonight’s event is to build new bridges,” said Elizabeth Sink, communication studies professor and member of the Fort Collins Interfaith Council. “Dare to engage across lines of belief.”

The event opened with an Islamic prayer presented by Merall Sherif, ASCSU senator for the Women and Gender Advocacy Center and founder of ASCSU’s Women’s Caucus. Sherif shared the prayer in both Arabic and English.

“A person is not a believer of God if he sleeps with his stomach full while his neighbor is hungry and he knows that his neighbor is beside him and is hungry,’” Sherif said. “The idea in that is that if everybody takes care of the neighbors around them, the entire community will be cared for.”

CSU Hillel Leadership council followed with two prayers: the HaMotzi or blessing over bread, and a song with lyrics translating to “How beautiful it is when brothers and sisters sit together.”

Audience members joined in the song, echoing through the room.

The last prayer was a Hindu blessing presented by Gaurav Harshe, an electrical engineering graduate student. Harshe sang the prayer in Hindi and read the translation in English.

“Having food is not just serving the stomach, but is a type of finer sacrifice,” Harshe translated.

The night included an Ingathering Jazz performance by Donovan Reed, Multifaith and Belief Council president and the event’s emcee, and MidKnight McMillian. CSU’s Basic A Capella also performed and conducted a sing along with audience members.

As standing attendees flooded to the fully kosher meal, seated patrons sat and shared their practices, asking and answering questions included on the pamphlets left at each table.

Volunteers working the buffet line included Doug Ringer and Molly O’Shea, two CSU freshman in Sink’s Key Community multifaith class. O’Shea said Sink did not require students to participate, but that she wanted the chance to help out. Ringer agreed, reiterating the importance of service.

“Professor Sink is really important in organizing this so our whole class was invited and we decided to volunteer,” Ringer said. “I thought it’d be interesting to serve all these people and I really like helping others.”

Dan Himes, a member of the Interfaith Council, said he chose to attend the event because of his roots within the council. Himes said he was shocked at the number of attendees and was excited to see the variety in people.

“(I hope) to meet other people and to hear their stories just like I’ll be able to give my own,” Himes said. It was his first time attending the event, as well as the majority of guests attending.

Karla Colonnieves said she came with a similar hope in mind. A friend invited her to attend for the first time this year.

“I just wanted to experience it and see the diversity of different faiths and beliefs represented,” Colonnieves said. “(I want to) deepen (my) appreciation for that diversity and learn about different traditions.”