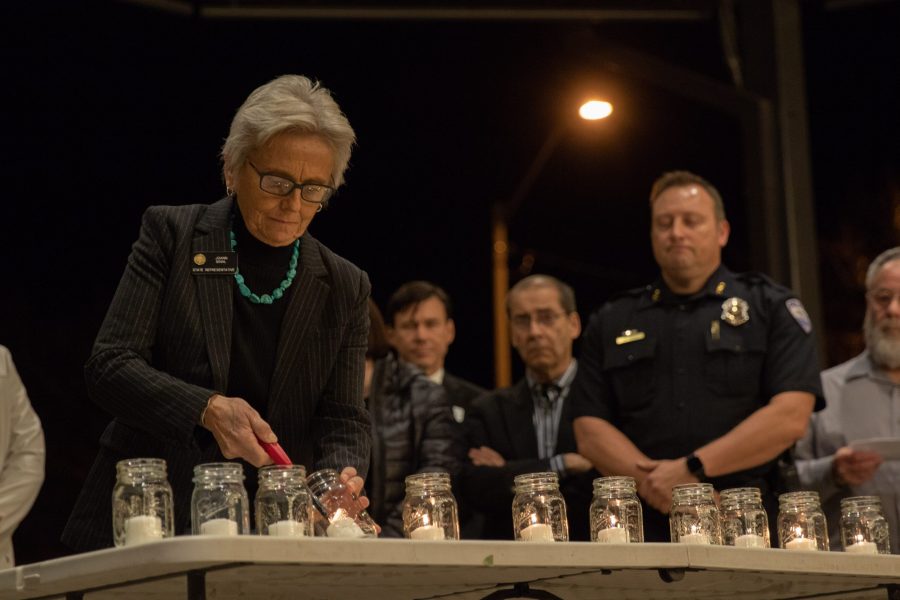 State representative Joann Ginal, D-CO, is one of the 15 people to light the candles at the candlelight vigil. (Nathan Tran | Collegian)

Candlelight flickered to highlight the faces of over 500 community members who gathered in mourning.

The Citywide and Interfaith Council hosted a Candlelight Vigil in Old Town Square Monday, Oct. 29 in memorial of the 11 casualties of a shooting at the Pittsburgh Tree of Life Synagogue on Saturday.

Members from the Congregation Har Shalom staff spoke, equating the 11 shooting casualties to letters of the Torah.

“It’s been suggested that the Jewish people are like the scroll,” Rabbi Sally Finestone said.  “If one member of the Jewish people is missing, we are not complete. We are lacking 11 letters of our scroll today.”

Finestone continued to denounce violence and urged the crowd to reject anti-Semitism and make sure that hate-motivated incidents find no place in the Fort Collins’ community.  She led the crowd in a Hebrew hymn of peace, love, and hope.

Within his address, Swoboda said that it speaks lengths about the community that so many showed up to the vigil and that an effective police force works with people before problems occur, which he and the Fort Collins Police strive to achieve.

“If people see something that might not be a crime but might make them a little uneasy, it’s important that they have enough of a connection (with FCPD) to call somebody,” Swoboda said.

Swoboda said one of the things that he, as police chief, and FCPD can do is make sure that officers are all well trained, well equipped and can show up when events like those in Pittsburgh occur to save lives and be there for those in need.

The staff from the Congregation of Har Shalom lit 11 candles to conclude the service, one for every casualty of the shooting at the Pittsburgh Tree of Life Synagogue.  The crowd stood silently as the Congregation lit each candle, and read the casualties’ names and ages.

Fort Collins citizen Marcy Rubin, attended the vigil holding a sign that said “Will Trade Racist 4 Refugees.” Originally from Pittsburgh, Rubin said that the events directly impacted her and her family.

Chief Swoboda finished the vigil with a quote from the late Martin Luther King Jr., saying “darkness cannot drive out darkness, only light can.”

Peyton Dailey can be reached at news@collegian.com or on Twitter @peyton_dailey_.