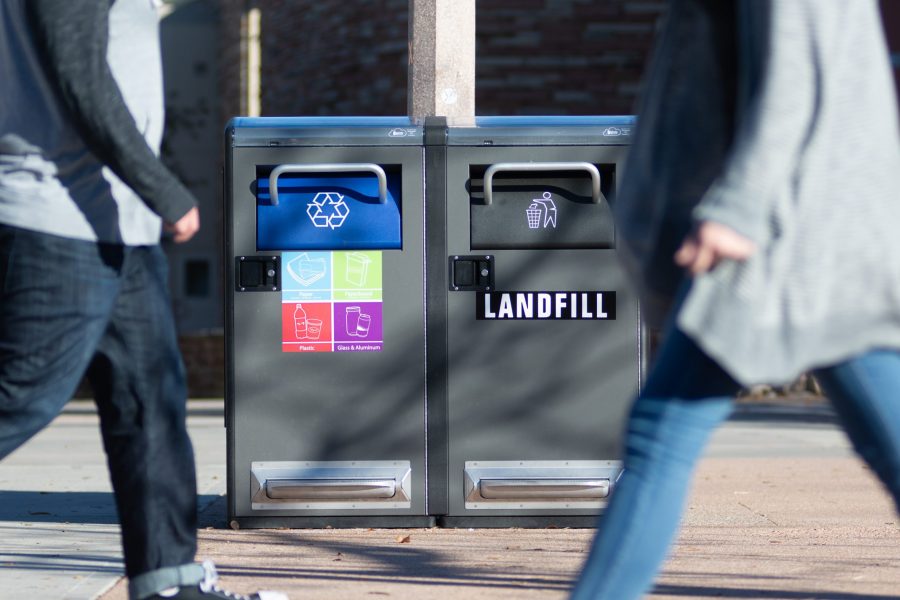 Students walk in front of the solar-powered trash and recycling bins in the Plaza. The bins were introduced to campus in late September. (Photo Illustration by Colin Shepherd | Collegian)

Solar panels have started to appear more across Colorado for a while now; no longer are these energy-absorbent sheets of silicon limited to calculators and rooftops.

In the last few weeks, solar panels have been spotted in a new place around the Colorado State University campus: atop recycling bins and trash cans on campus. Well, what look like just trash cans.

These new contraptions are high-tech, self-powered and interconnected trash and recycling compactors. They are made by Bigbelly, a smart waste company, and can hold up to five times the amount of waste as a regular trash or recycling bin, according to the company’s website.

All aspects of the Bigbelly stations – the compaction, the communications, the calculations – is powered by a 22-watt solar panel atop each Bigbelly station. The panel absorbs sunlight and stores the energy in a 12-volt battery within the unit.

In September, the University installed 58 of Bigbelly’s fifth-generation compactors along the academic spine of campus as part of a two-year pilot test.

The compactors are set up in “double stations” – a side-by-side configuration where trash goes in one unit and recycling goes in the other. These stations replaced numerous traditional trash and recycling bins on campus.

Aside from a jam that stopped one station from fully closing near Yates Hall, everything has gone smoothly, said Sheela Backen, the integrated solid waste program manager for Facilities Management.

So far, one of the biggest benefits of the compactors has been time saved, she said.

Since Bigbelly’s compactors can hold so much more trash or recycling than the previous waste bins on campus, they have to be emptied far less often.

“My group was emptying the recycle bins on campus every other day. Monday, Wednesday and Friday we would empty them,” Backen said. “Now, it’s about once a week that we empty them.”

There are sensors inside of every Bigbelly bin that can tell how high the waste is piling up. When it reaches a certain level, the compactor comes on and condenses the pile.

For Tom Satterly, associate vice president for Facilities Management, it wasn’t his first time working with the solar compactors. Satterly formerly worked for the University of Georgia, which implemented Bigbelly stations on its campus in 2009.

In an email to The Collegian, Satterly said that UGA now has 140 individual Bigbelly compactors on campus. Last year, the program resulted in an 86 percent decrease in the number of waste collections – from 20 pick-ups per month to only two-three with Bigbelly, he said.

Not only that, the compactors have software that will notify University staff if approaching full. When a compactor needs to be emptied, it will send an alert to an online dashboard that keeps track of the status of all Bigbelly units on campus.

“When it tells us the bins are full, we go and empty it,” Backen said.

The CLEAN management software also provides the University with data to improve the efficiency of CSU’s waste program. Satterly said that it measures metrics including collection efficiency, recycling diversion and volume per waste stream.

That’s not to mention the environmental impact.

“Fewer collections and more optimized operations means that fewer liner bags and trash are going to the landfill,” Satterly said.

Among other things, the new solar-powered compactors are also supposed to look better, Backen said.

Bigbelly bins employ a strategy of total containment to avoid visible waste, overflow and curious critters, according to the company website.

“It’s the aesthetics,” Backen said. “The aesthetics is better throughout the campus corridor now.”

Satterly said that the units weren’t purchased; rather the program runs on a subscription model that includes software, installation, inspection and much more. Each double station’s monthly subscription cost is $222, Satterly said.

It’s not official if more solar-powered waste compactors will be installed on campus. When asked about future plans, Satterly said that the first 58 Bigbelly units were, “hopefully only phase one of a full campus deployment.”