Graduate student uncovers the past to understand human behavior today 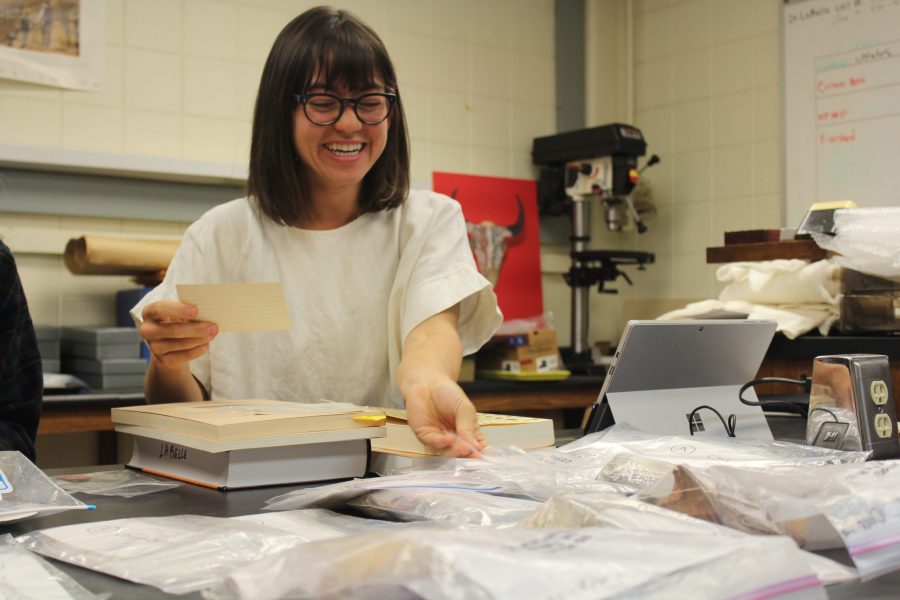 Graduate Archeology student Marie Taylor works in her lab on a private collection of artifacts such as stone and arrow heads that were sent in to be analyzed and documented. Through taking an Anthropology class during her undergraduate degree, Taylor found her interest in Archeology and wanting to learn more about the history of people. (Matt Begeman | Collegian)

After enrolling in an Archeological Field School course, a hands-on crash course in archeology, first-year graduate student Marie Taylor discovered her passion for studying humans of the past.

Taylor, a non-traditional student who recently completed her bachelor’s degree, was working a desk job when she discovered her interest in learning more about people.

“You come across lots of different types of people and wonder why they’re like that or how did they get to that position in their life,” Taylor said. “I just wanted to learn more about how you learn about that, so it propelled me to do more research into anthropology which is just that, the study of people, their culture, and their behaviors.”

Taylor said a visit to Pine Ridge Reservation was a contributing factor for why she’s involved in anthropological work. Taylor said that before she started studying Anthropology, she had a very ill representation of prehistoric peoples.

“I am very interested in the misrepresentation of peoples of the past,” Taylor said. “In the end, that made me more interested in the prehistoric part of (Pine Ridge Reservation’s history), the nonwritten stories that they have of their ancestral history and traditions, so I began to look into how do you research things that are not written down,”

Taylor said that this interest led her to realize that the way to study this topic was through archaeology.

“You can study people’s behavior, how people interacted, their culture and traditions through their remains and that’s kind of what sparked all of this,” Taylor said.

After working with Taylor in the Archaeological Field School from May to July of 2018, Madeline Kunkel, a third-year Anthropology student, says Taylor’s passion for understanding the prehistoric history of people has been inspiring for peers like Kunkel who says Taylor has helped her find her passions and pursue them.

“From the get-go, I really looked up to her. She is kind, fun and humorous. Not to mention incredibly knowledgeable about archaeology,” Kunkel said. “Through my work with her over the summer, I was inspired to go to graduate school like her and be more conscious of my ecological footprint.”

The class led Taylor to research ceramic shards in Northern Colorado. Taylor said that the study of ceramics is important because ceramics usually denote sedentism, the practice of living in a place for a long period of time. Taylor added this is not something that was very popular in Northern Colorado, especially in the Fossil Creek area where her research took place.

Taylor added that she was interested in the presence of ceramics at the site since the people living there weren’t doing any sort of domesticated cultivation. This interest led her to research on the ceramics at the sites,for one of the densest ceramic assemblages in all of that portion of Colorado.

Taylor said that the research shows no correlation between having ceramics and living in one place. Instead, the research alludes that Fossil Creek may have been a seasonal meeting place.

“The research tells me that really there wasn’t a correlation between the presence of ceramics and settling down, so what I grasped from that was they were caching these pots, leaving them in a specific place, and hunting and foraging elsewhere and then coming back to specifically Fossil Creek,” Taylor said. “Fossil Creek was probably a seasonal meeting place. They probably came back seasonally, used the ceramics during the fall time to process plants and maybe even meat.”

Taylor says that her findings also give a more well-rounded view of prehistoric human behavior.

“We typically look at archeology and think of hunter and gathers who move throughout time and their main objective is to become sedentary or to stay in one place and practice agriculture, but instead we see this more variable kind of lifestyle,” Taylor said. “People were taking advantage of all their environmental resources and you could still practice that type of life and move about throughout time, you don’t have to eventually be farmers which I thought was really interesting.”

Taylor said that it’s important to have better research on prehistoric history in order to better understand the diversity of prehistoric and current human behaviors, adding that archaeology is very applicable to today in the idea that each person lives and expresses themselves differently.

“People did that also in the past and I think that there needs to be two different types of research,” Taylor said. “One where we research people who write things down and one where we research peoples of the past who didn’t write things down and there needs to be a representation of both because it touches on ideas of cultural diversity and personality diversity.”

Taylor has been able to inspire others such as Alaura Hopper, a third-year graduate student studying Anthropology, to enjoy their work and to be proud of it.

“She has created this beautiful environment to work in where I feel like I have room to grow and develop,” Hopper said. “(Taylor) influences me to put my very best work forward and has given me great cause to think about the importance of my work.”

Jorge Espinoza can be reached at news@collegian.com or on Twitter @jorgespinoza14.