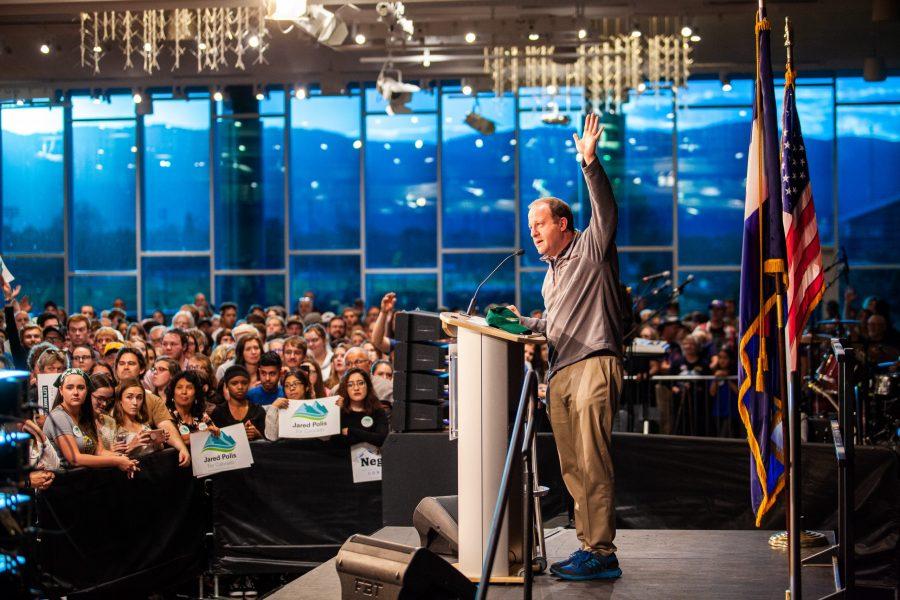 Jared Polis, Democratic candidate for Governor in Colorado has just won office in Colorado after Walker Stapleton concedes. See our previous coverage from the on-campus debate between Polis and Stapleton here:

Polis, the Democratic candidate, is currently a congressman in the House of Representatives for Colorado’s second congressional district, which includes Fort Collins and CSU. Republican candidate Stapleton is the current state treasurer of Colorado. He was originally elected in 2010 and won a second term in 2014.

During the debate hosted by The Coloradoan and moderated by 9News, the two candidates discussed higher education, potential alignments with major members of their respective political parties, among other things.

Nick Coltrain, a political reporter at The Coloradoan, gave the candidates a question from a reader about making higher education free for middle-class Coloradans. Polis and Stapleton both voiced support for making college cheaper for students but differed on how they want to do it, with Stapleton wanting to focus on trade schools as well.

Stapleton referenced RK Mechanical, a mechanical contractor in Denver, as an example of opportunities in the state a traditional education might not get young people. Stapleton said he wants to make sure that higher education and skills-based training are fully funded in Colorado.

“I think what we need to do as a state in Colorado is invest more in skills-based training, especially in areas of our state where we have failing public schools,” Stapleton said.

Stapleton on free college attendance for middle class families: “I would love to make college free but I don’t know how we do that.” #copolitics #COgovdebate

Polis listed his ideas for how school expenditures could possibly be lowered, such as cutting administrative costs in order to pass savings along to students.

“Our plan is to save students money on college,” Polis said. “We want to look at opensource textbooks because even after tuition, students spend, I think the average at CSU (is) $1100 on textbooks. We need to make sure that we can consolidate administrative expenses.”

One of the last questions of the night was directed to Polis. Clark asked him what changes he would make as governor of a moderate state coming from representing a more liberal district.

Polis also explained his relationship with Sanders, who will be touring Colorado in several weeks to support Polis’ run for governor. The main difference, Polis said, was their belief in the free market. Polis referenced his experience starting several companies and said he was proud to have created hundreds of jobs.

Polis says the only thing worse than a woman having to make the choice of abortion is Walker Stapleton making that choice for her. #COgovdebate #copolitics

“Bernie and I don’t agree on every issue,” Polis said. “But we also have some similar values about making sure we fund our schools (and) making sure we save people money on healthcare.”

The candidates also discussed what their stance would be as governor if Roe V. Wade was overturned by the Supreme Court. Stapleton said he plans to be a pro-life governor, but would also recognize Roe V. Wade as the current law of the land. Polis said the Supreme Court has already eroded the law, but said it is up to a Colorado governor to protect the rights of women to own their own reproductive health.

Lively scene as moderators have had to repeatedly reign in Walker Stapleton on issue of past case of Polis pushing a woman in self defense. #copolitics #COGovDebate

Several times, moderators 9News Kyle Clark and Marshall Zelinger had to remind both to answer the questions asked of them.

Stapleton referred to a 1999 assault case involving Polis where he pushed a female employee after she attempted to steal work documents on her last day a number of times. Polis responded by saying he was happy to talk about the issue, but that it was unrelated to his candidacy.

“It is inexcusable to ever forcibly push a woman, regardless of the circumstances,” Stapleton said.

One of the last questions of the night was directed to Polis. Clark asked him what changes he would make as governor of a moderate state coming from representing a more liberal district. Polis did not directly address that question but instead explained how he worked with Republicans in his time as a representative.

“(Larimer County) has three Republican commissioners… but it is also a county that I have carried in my re-election because Republicans who know me best support me in Larimer County along with independent voters,” Polis said. “I don’t believe in this left-right divide, I think it’s forward versus backward.”

Assistant News Editor Stuart Smith can be reached at news@collegian.com or on Twitter @stuartsmithnews