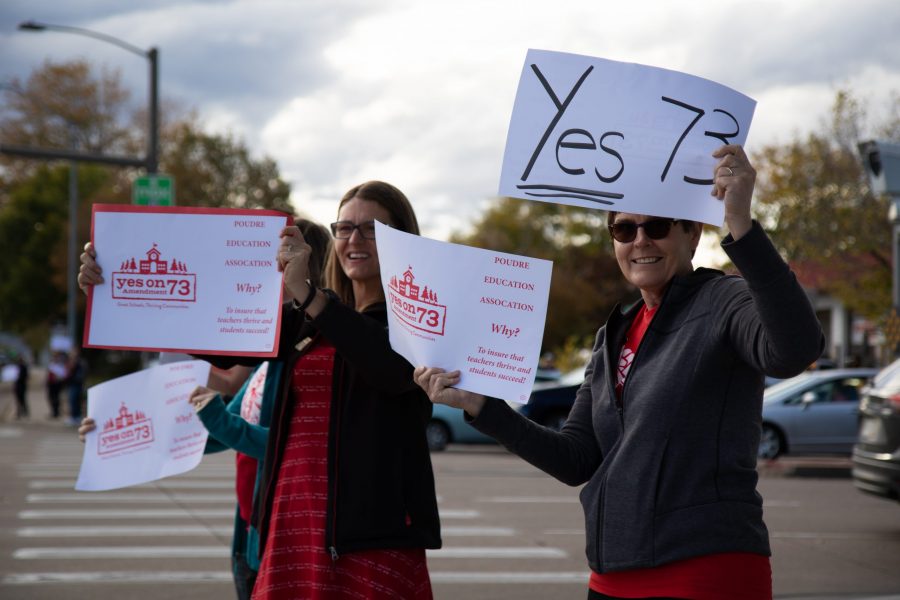 Once again, Fort Collins teachers are advocating for increased funding for public education. This time, they’re trying to raise awareness on how your vote can change that

Fort Collins teachers and supporters are getting the word out about Amendment 73 on the Midterm ballot, which would increase public funding education through what they refer to as “walk and knock’s” and “honk and wave’s.”

The amendment aims to increase funding for public schools through an increased income tax. If passed, taxes would increase for people making over $150,000 per year, which currently makes up 8.2 percent of Colorado’s population.

In order to get on the ballot, Amendment 73 had to obtain supporting signatures from 2 percent of voters in each State Senate district. It also has to pass with 55 percent majority vote, because it’s a change to the Colorado Constitution, according to a news release from Secretary State Wayne Williams on Amendment 73.

The amendment surpassed the signatures needed from 2 percent of voters, and got 170,000 signatures, said Donald Anderson, the current chair of the State Advisory Council of Parent Involvement in Education.

“So we know there is a need, and alike, for what we’ve done,” Anderson said. “We don’t have some big funding, this is totally grassroots and really ‘trying to make it happen.’ It took a lot of effort to be able to get across the state and get signatures.”

Due to the Taxpayer Bill of Rights and the Gallagher amendments in the Colorado Constitution, increasing funding for public education is difficult, said Shelly Wells, a teacher for Poudre School District. This is because both amendments limit property taxes, and public schools are funded through a mixture of state and property taxes, according to GreatEducation Colorado, the grassroots organization behind the amendment.

If you go cheap, you get a cheap result. We’re essentially shooting ourselves in the foot by not properly funding education.” Niall O’Dwyer, teacher at Fossil Ridge High School.

Kurt Knierim, a Rocky Mountain high school teacher of 27 years currently advocating for the amendment, said Colorado spends around $2,800 less per pupil than the national average. Voting for this amendment will help change that, he said.

“We’re facing a huge shortage of teachers because we can’t pay them,” Knierim said. “And we want the best people in front of kids because this is our future. I’m at the end of my career but I’m doing this for the young teachers because they deserve better than I got.”

Another teacher advocate from Fossil Ridge High School, Niall O’Dwyer, said his experience teaching in Ireland for a decade demonstrated Irish kids outperform American kids. This is generally because those class sizes are smaller and Ireland puts more money in education, he said.

O’Dwyer said America has been falling down in rankings, and bettering public education is the way to keep on the cutting edge of innovation.

“If you go cheap, you get a cheap result,” O’Dwyer said. “It’s really short-termist to think like the old saying, ‘a penny wise a pound foolish.’ We’re essentially shooting ourselves in the foot by not properly funding education.”

Rob Jackson, a teacher at Fossil Ridge High School, said Amendment 73 would be a great benefit to local communities and public education because he feels that this funding issue should also be helped at the state level.

Jackson said there’s currently a $100 fee to participate in the Speech and Debate club he coaches, but doesn’t want that opportunity to be limited because of a financial burden.

“School funding in Colorado is very important because Colorado is too great of a state to have the funding situation it currently has,” Jackson said. “Fees are all too common for a lot of sports and activities, so funding education will perhaps enable some schools to provide funding for clubs and activities so kids won’t have to pay so much money to take part in an extracurricular.”

Anderson said this amendment is the best way to increase funding for public education because it will create a steady income for schools that are protected.

Another benefit to the amendment, Anderson said, is that only higher-incomes families will be taxed higher. Higher-income-families still profit from good public education, whether that’s through their children or helping create better educated kids for the future.

“With the Gallagher measure, we keep losing money locally that the state has to backfill in,” Anderson said. “This measure puts a hole in that bucket, so it’s not going to leak anymore. I think this is going to make our schools better, our teachers better and help our communities.”