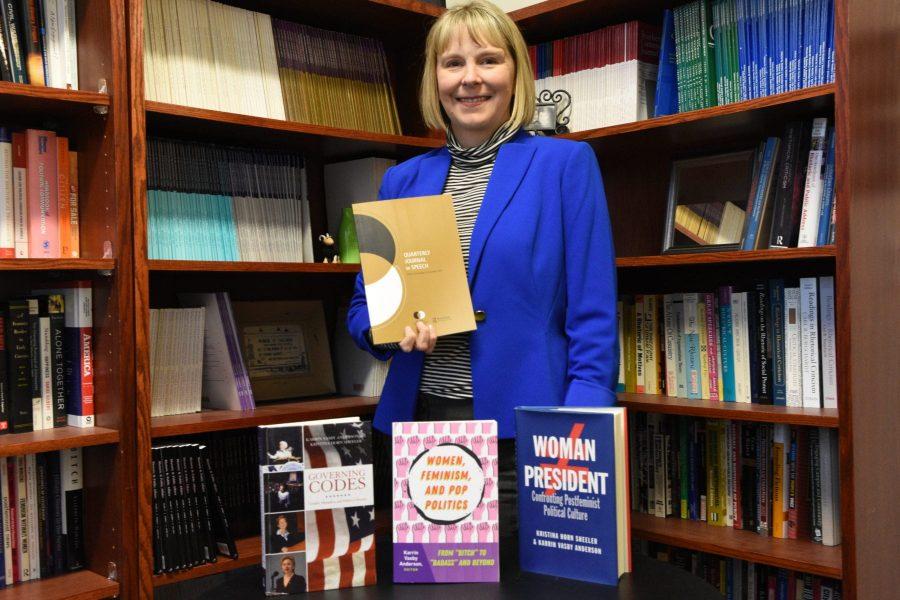 Communication Studies Professor Karrin Anderson, poses for a photo with the three books she has written while holding the scholarly journal she is reviewing. Anderson primarily writes about "the political and pop culture factors that inhibit people form seeing women as credible leaders." (Matt Tackett | Collegian)

A Colorado State University professor of communication studies has been studying why a woman has never been elected president. In fact, she wrote the book on it.

Karrin Vasby Anderson has published two books and a number of articles exploring the divide between female politicians and the oval office. Her most recent book, “Woman President; Confronting Postfeminist Political Culture,” which she co-authored with Kristina Horn Sheeler, responded to a notionthat the United States is waiting for the right woman to run.

“We did a review of the literature and found that there were a lot of books out there saying that women candidates needed to behave themselves differently,” Vasby Anderson said. “The problem is that we have a culture which is inhospitable to women candidates. That the culture is what needs to change, not the candidates.”

Vasby Anderson said the problem female candidates face is called the double bind. In other words, if a woman appears to be a credible political leader, they are viewed as unappealing and masculine. If a woman presents herself in a more traditionally feminine way she is dismissed as not credible or capable of the presidency.

Vasby Anderson started studying women in political communication while earning her master’s degree at CSU. She said a class in rhetorical criticism got her to analyze a speech on health care by then-First Lady Hillary Clinton. She went on to write her master’s thesis on Clinton’s health care reform rhetoric and wrote her doctoral dissertation on Clinton’s public identity and media framing at Indiana University.

After graduating with her Ph.D., Vasby Anderson returned to CSU as a facility member and expanded her area of research to “the notion of gender and the US Presidency.” She is currently studying the interaction of politics and popular culture and has published a volume with a handful of colleagues on the topic called “Women, Feminism, and Pop Politics: From ‘Bitch’ to ‘Badass’ and Beyond.”

Clinton’s loss in 2016 reaffirmed Vasby Anderson’s research, despite the fact that, at the time, she thought the US was about to have its first female president.

“What happened in 2016 was…a really forceful backlash against Hillary Clinton’s candidacy,” Vasby Anderson said. “It’s no surprise that the rejection of Hillary Clinton as a candidate also ushered in the Trump presidency; somebody who was more explicit about having very sexist, misogynistic attitudes towards women, particularly women who disagreed with him.”

Vasby Anderson also pointed towards Elizabeth Dole, wife of famous conservative Bob Dole, and her bid to become the Republican presidential nominee in 1999. She said despite the fact Elizabeth Dole was heavily involved in conservative politics and was encouraged by her party to take a run at the presidency, she had a hard time raising money.

“That’s because even people who liked her in her party didn’t view her as a credible candidate,” Vasby Anderson said. “In her case, it wasn’t a misogynistic dislike of her. It was people who generally liked her,…but when she actually (ran) they didn’t see her as a potential contender.”

In order for individuals to combat the double bind, they have to access whether they dislike a woman as a candidate or based on sexist societal norms, Vasby Anderson said.

She pointed towards a strategy used during Clinton’s try for the Democratic nomination in 2008. Citizens United Not Timid, an organization set up by Republican strategists, printed shirts with the acronym for their group above the phrase, “showing the American public what Hillary Clinton really is.”

“If that’s how we are attacking women as leaders, that’s a clear expression of misogyny,” Vasby Anderson said. “When we respond to somebody in politics, (we should) ask ourselves ‘am I responding negatively to a policy disagreement or am I falling prey to stereotypical depictions?’”