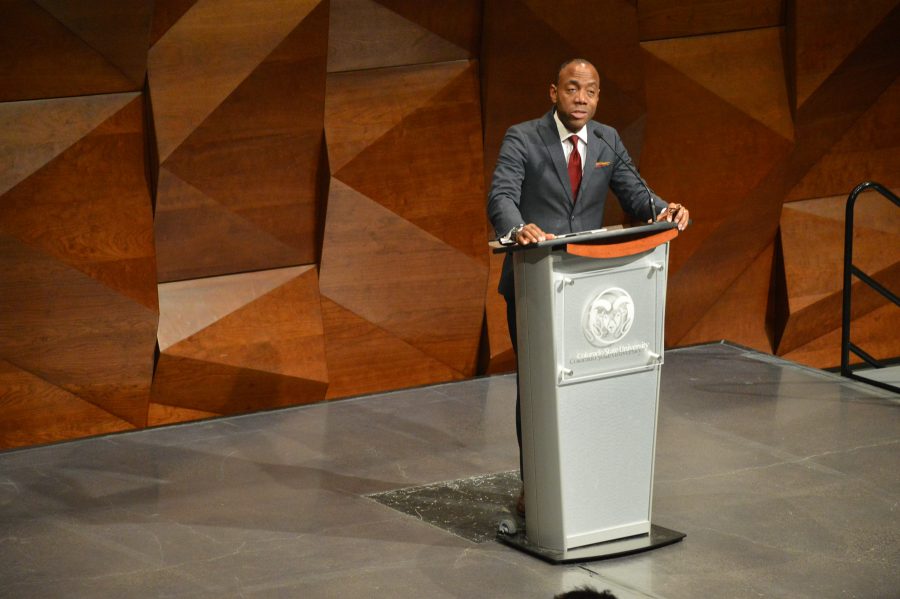 Former president and CEO of the NAACP, Cornell Brooks, speaks in the LSC theater on October 3rd, 2018. Brooks is a graduate of both Head Start and Yale Law School, as well as an ordained minister, civil rights attorney, and social justice activist. Brooks' Keynote address is a part of the Diversity Symposium. (Mackenzie Pinn | Collegian)

The Office for Diversity at Colorado State University carved out four days worth of events for this year’s Diversity Symposium, touching on everything from the equity gap to issues of race in Disney films. Cornell William Brooks joined these discussions on Wednesday as a keynote speaker.

The Office for Diversity, in collaboration with Ram Events, hosted the event. Mary Ontiveros, the vice president for diversity introduced Brooks, commemorating him for his work as President and CEO of the National Association for the Advancement of Colored People from 2014-2017, among other things.

“I want to extend my appreciation to the Colorado State University family for this opportunity to come and share with you during this diversity week,” Brooks said, specifically thanking Ontiveros.

“In our nation’s history…all across our country we see students taking up the most difficult public policy challenges of our time,” Brooks said. “This is a moment in which a generation of students has declared a Shakespearean season of justice seeking.”

Brooks commemorated the work of youths in social justice movements. He said that now is a time for people in academic communities to look within and be mindful of the political climate in our nation.

Brooks said his own role models were high school and college students—young people who demonstrated persistence and determination. Brooks stressed that these role models could be found nearby.

“There’s role models all around you while being in a college and university setting,” Brooks said. “The students around you who are studying…challenges? Admire them.”

Brooks’ second lesson, love deeply, aimed at controversial discussions. In order to have these conversations, people on both sides must be respectful and loving of one another, regardless of whether or not they like one another.

Brooks said the conversations must happen through love and harmony to reflect your goal.

He described this as leading with the mind and body. He said the world needs leaders who are willing to do their research and due diligence to be the most informed and the best prepared.

Brooks suggested students confront others, but more importantly, confront themselves and carry out “intellectual honesty.” He referenced President Donald Trump’s response to the Charlottesville Protest in which he blamed “both sides.”

“That’s not the kind of leadership we need,” Brooks said. “We need leaders who are willing to call out wrong as wrong. That’s where we are as a country.”

To close his speech, Brooks spoke the lyrics of a song and poem by James Weldon Johnson, stressing the last line, “Let us march on till victory is won.”

When asked how a person might go about leading and helping those oppressed by hate speech that falls under protected speech, Brooks suggested speaking up for them to make sure no one feels isolated.

“When we hear people being marginalized… it has to be called out,” Brooks said. “Create a community of support.”

Brooks also suggested that when a leader brings people together, the challenge becomes creating these communities of love and support. It is important to understand how to focus in on individual’s strengths to make tasks feel specific, rather than general, Brooks said.

According to Brooks, acknowledging the past is important because, without an appreciation for what has already happened, there is no future. His suggestion for leading through education is to encourage one another and create communities of both instruction and inspiration.

“(Ask) people to be brave,” Brooks said. “We need to create spaces where we encourage people to be grown up intellectuals. What’re you afraid of?”

For interested students, faculty and staff, the Diversity Symposium will have more events and discussions on Thursday from 9 a.m. to 4:30 p.m. For more information click here.