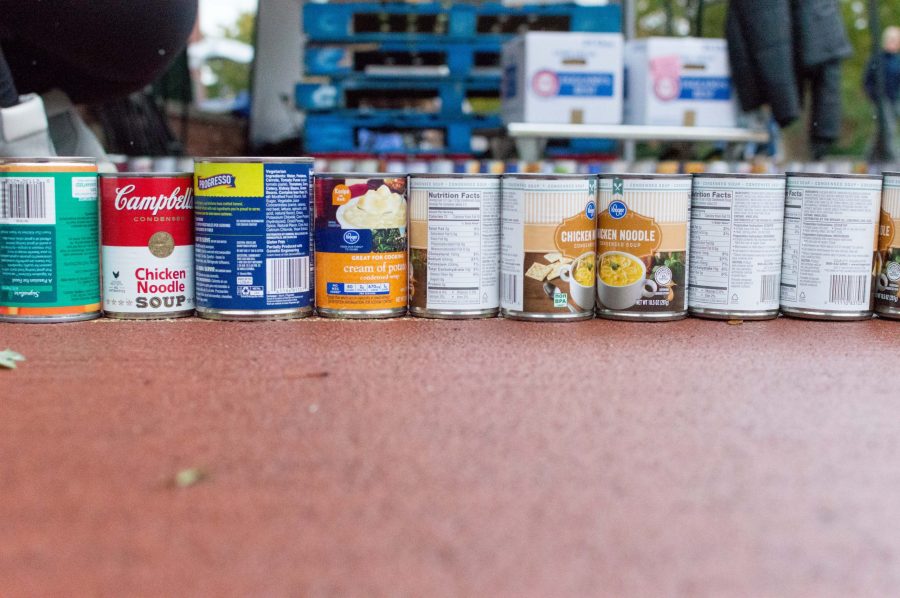 Cans from the Tri-Delta sorority sit on the plaza during the CANstruction. The sorority spent $145 on cans that came in on pallets. (AJ Frankson | Collegian)

Since its start in 1987, Cans Around the Oval has grown in the number of donations received annually.

While years past have been successful, with $56,349 raised in monetary donations in 2017, this year managed to squeeze ahead by approximately $5,000.

The original goal for this year’s Cans Around the Oval drive was an ambitious $65,000, said Sarah Stephens, program coordinator for Student Leadership, Involvement and Community Engagement (SLiCE). That was missed when the full amount of monetary donations (excluding cans donated) came out to $61,459.

“If we had actually taken all the food donations the day of and lined The Oval, it would have circled it 17.7 times,” Stephens said.

This year saw the same three winners as the previous year for monetary donations. The Colorado State University College of Business took first at $14,383. The Office of the Vice President for Research at $11,824 and Rocky Mountain High School at $5,081 took second and third, respectively.

While this year’s can donations could stretch around the oval 17.7 times, donated cans are only stretched down one-fourth of The Oval to pay homage to the original founders of the project.

“We actually don’t line the whole Oval,” Stephens said. “People come and see pictures online and they think that they see it being lined, but all we do is we honor those who did it originally and line up one-fourth. It’s also a ton to manage.”

The monetary donations go to the Food Bank for Larimer County, where, Stephens said, they can turn $1 of food into $5 of food, which is more efficient than getting food from the grocery store yourself for donation.

“For them, that $1 holds way more significant value than that tomato sauce you buy in a can,” Stephens said. wStudents interested in volunteer work within the local community can look at SLiCE’s Service Matching program online, where they can fill out a short form and be matched up with a program that’s right for them.

Maynard said that volunteering events, such as Cans Around the Oval, are part of what the College of Business tries to teach students.

“One of our catchphrases is to make a difference…and we try and do that in our classes by showing our students they can make a difference with their careers,” Maynard said. “So I think we’ve sort of taken that mantra to heart in terms of making a difference in the local community as well, and Cans Around the Oval has such a long history at CSU that it’s sort of a natural partnership.”

Nicholas Veintimilla can be reached at news@collegian.com or on Twitter @NickVeintimill1.