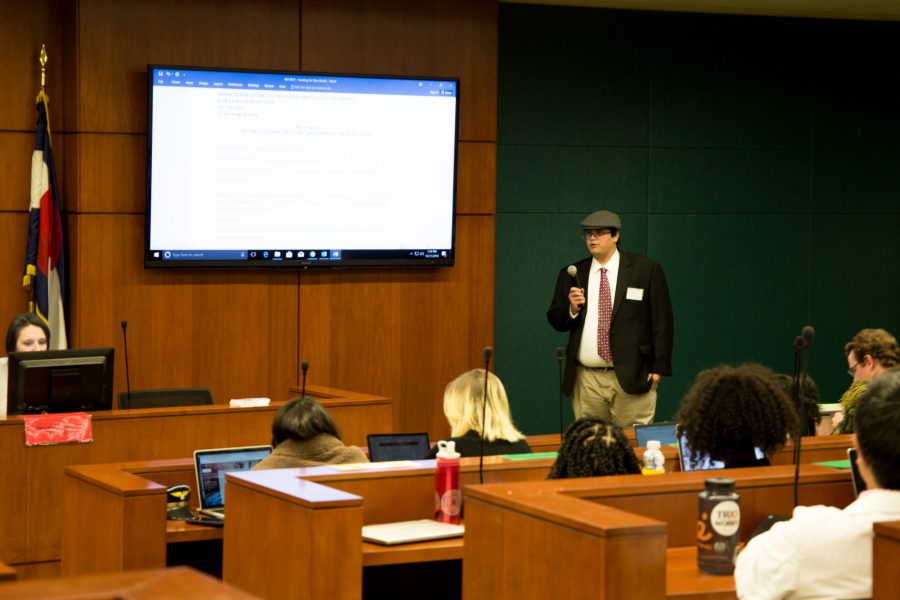 Chief of Staff Zachary Vaishampayan presents a bill to the ASCSU senate, which supports the blue books. (Anna Baize | Collegian)

Dress code was abolished for Halloween, the Bee Bill passed unanimously and funding proposals for Blue Books and an Identity Awareness event was presented to the student government Senate Wednesday night.

Associated Students of Colorado State University Director of Campus Engagement Sam Braun’s bill to provide funding to the Apiculture Club passed 31-0-0 Wednesday night, albeit with some changes to the original execution of the plan.

The original proposal was for $5,146.98 to be allocated to Facilities Management before construction of a new educational beehive. The Budgetary Affairs Committee rounded up to $5,147, and due to bylaws, changed the bill so that instead of fronting the money to Facilities Management, ASCSU would instead pay them back for it afterward.

“We as a student organization cannot buy capital expenditures, which means that we can’t buy things that can be bought again,” Budgetary Affairs Chair Alissa Threatt said. “But, we can pay someone’s invoice for those expenditures, and we can direct a department to manage those items that were bought.”

The beehive will be located just south of campus, at Center Avenue and Prospect Road.

ASCSU has historically paid for the Blue Books students can freely take from the CSU Bookstore for written tests, but lapsed in their payments last year, ASCSU Chief of Staff Zachary Vaishampayan told the Senate Wednesday.

“We give a certain amount of money to the Bookstore every year,” Vaishampayan said. “They purchase the Blue Books, and per the agreement, make them free for students. Last year’s administration … allocated zero dollars to pay them, and thus didn’t.”

Vaishampayan’s bill would draw the needed $10,300 for these purposes, with $6,000 going to pay off last year’s debt and $4,300 to pay the additional cost for Blue Books this year.

This year’s administration originally set $6,000 aside to pay for the 2018 Blue Books, but higher costs of production and higher student use led to this bill for supplemental funding. Additionally, the Bookstore asked for the owed money from the previous bill, which added to the number of funds requested.

During a Q&A segment about the bill, questions were raised about if ASCSU should keep funding Blue Books in the future because of the drastic increase in pricing. Vaishampayan expressed agreement with that but said the bill is intended to address agreements ASCSU has already made.

“This is covering obligations that ASCSU, in years prior, already agreed to,” Vaishampayan said. “I would be more than willing, and would, in fact, encourage us, to look into whether or not we want to continue doing this in the future.”

Kanayo Okolo, ASCSU director of university affairs, introduced a bill for the Senate to contribute $2,500 to the Identity Awareness Symposium. Okolo has already funded the rest of the event cost, more than $2,500, from University Affair’s discretionary fund.

“At this event, we want to talk about cultural appropriation, what is racism, many different things of the LGBTQ community and just acknowledge everyone,” Okolo said.

The Symposium, which is to be held Nov. 13 in the Lory Student Center Theatre, is intended to promote education and visibility for all identities on campus.

During Q&A for the bill, Okolo was asked what would make the event different from other diversity events held at CSU.

“This is more towards bringing everyone from different offices,” Okolo answered. “It’s bringing every office together and talking about a much broader situation in our community. It’s not specifically for one office, like to the (Black/African American Cultural Center) Office or to the (Asian Pacific Islander Cultural Center) Office, it’s bringing all these offices together in one space (to talk) about each person’s experience.”

Stuart Smith can be reached at news@collegian.com or on Twitter @stuartsmithnews.