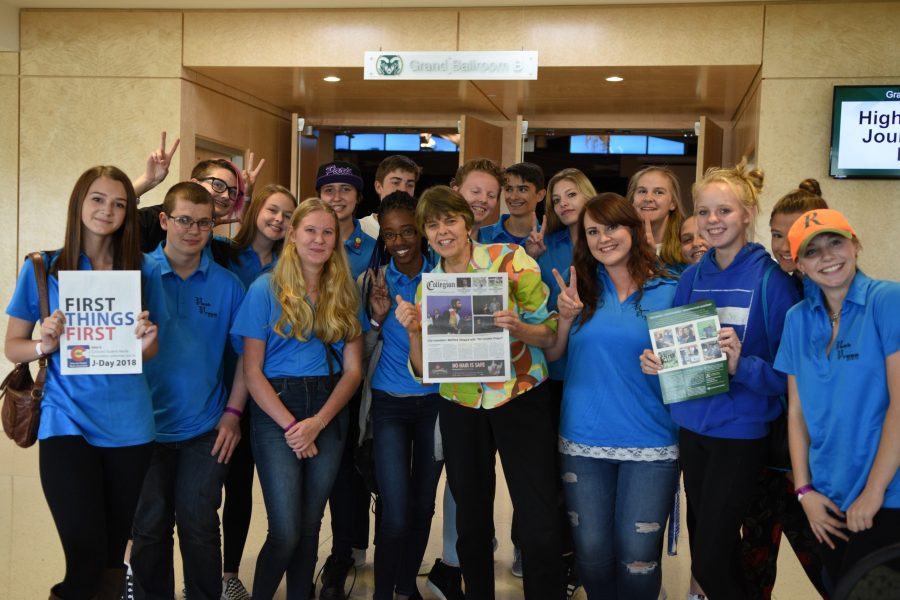 Mary Beth Tinker poses for a photo with a journalism class from Liberty High School in Colorado Springs. Tinker, best known for the Tinker v. Des Moines Independent School District Supreme Court case of 1969, was the keynote speaker at the J-Day event on September 27th. Tinker was a student involved in a protest of the Vietnam War which led to a supreme court case that has become a key point for students' right of free speech. (Matt Tackett | Collegian)

The voices of student activists today are echoing the same voices that opposed political agendas almost 50 years ago.

Free speech in schools wasn’t always advocated for. The justice system did not recognize the rights of students until a group of teenagers protested the Vietnam War using black armbands in school.

Mary Beth Tinker sat in the middle of this landmark supreme court case: Tinker v. Des Moines Independent Community School District. Tinker was only 13 when she, her siblings and their friend, Christopher Eckhardt, all wore black armbands to school as a way to protest the Vietnam War.

I think there has been activism the whole time. But now, and some periods are more intense than others, and we are definitely living in one of those times. As one student said recently, ‘It’s mighty times’ and I couldn’t agree more.” Mary Beth Tinker, advocate for free speech

Tinker, now a major advocate for student rights, visited Colorado State University Sept. 27 during Journalism Day, more commonly known as J-Day, an all-day event for middle school and high school students to discuss journalism.  She spoke to students about her experience fighting for the right to free speech.

“I think there has been activism the whole time. But now, and some periods are more intense than others, and we are definitely living in one of those times,” Tinker said. “As one student said recently, ‘It’s mighty times’ and I couldn’t agree more.”

In response, the school suspended Tinker, her siblings and Eckhardt. The news of the suspension reached the American Civil Liberties Union, which helped the students sue the school district.

While the students lost the initial case, they appealed directly to the Supreme Court after the United States Court of Appeals for the Eighth Circuit was divided on the issue. Ultimately, the Supreme Court sided with Tinker and company on Feb. 24, 1969, relating to the previous ruling of West Virginia State Board of Education v. Barnette in 1943.

“Before the ruling in Tinker, administrators got to decide what was said in public schools by students,” Tinker said. “And sometimes they would let students speak if they agreed with it or if they wanted to and sometimes they didn’t or they didn’t have to… Tinker was really the first time the Supreme Court had weighed in on speech for students.”

In the Barnette case, the Supreme Court stated that students had constitutional rights within schools. Specifically, students had the right to not pledge allegiance to the flag. In the case of Tinker, the issue focused on students’ free speech rights.

Despite the case being almost 50 years old, students are still connecting to Tinker, and the fight to stand up for free speech in schools.

“It is so exciting to see all the high school students, middle school students, college students all over the country and all over the world are speaking up and standing up for your own interest,” Tinker said. “Because I don’t think you’re getting a great deal in the way things are set up right now considering the climate change issues, pollution, health issues.”

Modern issues like the #MeToo Movement, March for Our Lives and the current Supreme Court nomination are all things Tinker believes students should be able to weigh in on.

If there is something that I did that can help encourage young people to speak up for themselves I’m so happy that that’s the case.” Mary Beth Tinker, adovacte for student free speech rights.

Tinker was excited to see the way students here at CSU are using their free speech rights on campus.

“I was so excited to walk over here, first of all, to be handed a copy of The Collegian which I had read yesterday’s but now I was happy to see the current issue and the many issues that you are all talking about and also to see written on the sidewalk in chalk, national voter registration day this way,” Tinker said.  “And just to see that this is a campus where students are using their rights to speak up and make a difference.”

Tinker v. Des Moines became a landmark case for youth’s free speech and, according to Tinker, will hopefully continue to do so.

“If there is something that I did that can help encourage young people to speak up for themselves, I’m so happy that that’s the case,” Tinker said.

Claire Oliver can be reached at news@collegian.com or on Twitter @claireity21.