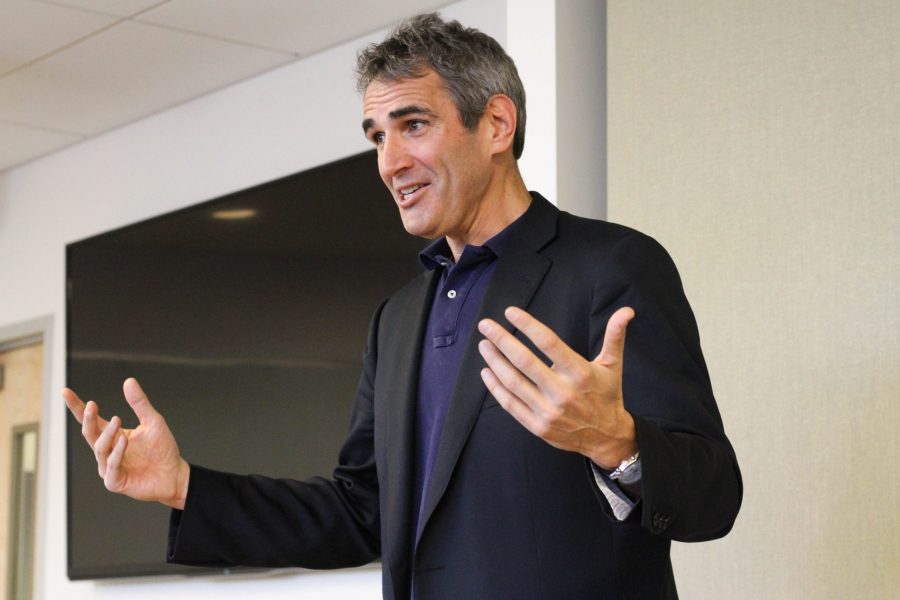 Roger Barris, a Libertarian Party candidate for the US House of Representative second district, speaks to students at CSU on April 11. Barris spoke on his stance on a number of issues and fielded questions from the crowd. (Ashley Potts | Collegian)

Roger Barris is all for consistency — unlike Democrat and Republican politicians, whom he stated are “complete hypocrites.”

The Libertarian candidate for Congressional District 2 representative is running to create “the smallest government possible in order to create the greatest scope for individual liberty.”

To Barris, his party’s views are actually principled and consistent. Democrats do not support economic freedom and will make policy based on polls, while the GOP cannot even pretend they support individual freedom under the current administration, Barris said.

Barris’ small government values reflect in his many policy plans. He said he would introduce a single line bill declassifying cannabis from a Schedule I drug, and he is in favor of establishing term limits in Congress because “the most corrupt thing in American politics is the professional politician,” among other issues.

Overarchingly, he is running to “de-weaponize” the federal government.

While Barris finds it disheartening to see everything so divisive and politicized nowadays, he said it is an understandable consequence of big government.

“If we have the federal government making every decision, involving itself in every aspect of people’s lives — and this is both on the right and the left — then, of course, we have to fight like mad over who controls it,” Barris said. “And, that is not the America I want.”

One of his main campaign promises is to make a federal government so small people will not have to fight over it. His other two promises are to end the foreign wars and cut taxes while also cutting spending.

Barris moved to Colorado in 2017 after working throughout Europe for over 20 years. He has worked in investments, primarily real estate, and co-founded a company as an entrepreneur in 2010. He sold his interest in 2015 and is currently retired at 59 years old.

Unlike most Libertarian candidates, Barris is running a full-time campaign. Though he says his chances are slim,  his objective is really to jumpstart the Libertarian party as a viable third-party alternative.

If Barris does well, he hopes it will capture disillusioned old party voters and politicians, more mainstream support from Silicon Valley, Wall Street, Hollywood and media and pollster attention, all of which would allow Libertarians to begin building their own political campaign infrastructure.

Third parties can often be seen as spoilers who draw votes away from one major party thus allowing the other major party to win. But voters can choose their conscience this election, Barris said, because there is nothing to spoil.

CD2 has voted blue since 1974, and while a Republican could win in theory, Barris said, it would require a strong candidate, a perfect and well-financed campaign and probably a Red Wave — none of which he thinks Republican Peter Yu has.

“The reality is that if you vote blue or if you vote red, mathematically your vote is meaningless,” Barris said.  “Conversely, if you vote for me as a Libertarian, you help do what 60 percent of Americans say they want which is to create a real third party alternative.”

Barris takes umbrage with those who suggest Libertarians are for big business. In fact, he said, they are for free markets, and for him especially, incentives and competition, not “crony capitalism.”

That attitude is reflected in his environmental policy. While Barris said he has no problem with alternative energy, he does not want the government to subsidize it to fruition. Rather, he favors market forces which have led to replacing coal with natural gas fracking. He would also minimize carbon dioxide emissions through a carbon tax.

While he admits supporting a carbon tax is not very Libertarian of him, tragedy of the commons is one of the areas the free market cannot control, Barris said, and is a place for legitimate government regulation. Those unwilling to use price incentives are not really serious about the issue.

The carbon tax would come with two qualifiers, however: the removal of all other taxes, regulations and subsidies designed to reduce carbon consumption or promote alternative energy sources, and it would be a revenue neutral tax.

“I want to create incentives and not rules,” Barris said.

The tax would be built into price increases of gas and other carbon-emitting sources. Once taxes are collected, each household or adult will receive an even cut of the revenue in the form of a dividend. Those who emit fewer carbon emissions would then end up receiving more than they pay in taxes.

Barris would make the student debt crisis correct itself by removing all government subsidies and loan programs from higher education.

Barris compared the current student loan situation to the situation before the housing crisis of 2008.

“If the government were out of the business of lending money for schools, the price would plummet,” Barris said. “And then, all the concerns people have about who’s gonna pay for school would largely disappear.”

After that, private sector loans and charitable donations would cover any remaining needs, Barris said.

On immigration, Barris joked that the only wall he wants to build is between Colorado and California.

The candidate supports a more accessible guest worker program for unskilled immigrant workers — thus allowing them to fulfill the United States agriculture demand and easily return to their home country — and more support of H1B visas for highly skilled workers.

“One of (President Trump’s) big lies is that he’s only against illegal immigration — that is bullshit,” Barris said. “He’s against every form of immigration.”

Under a Trump executive order, H1B visas have become significantly harder to obtain or renew, according to research done by Forbes.

Barris called this “absolute insanity” as the types of immigrants who receive H1B visas greatly benefit the country and should be “welcomed with open arms.”

For children brought into the country undocumented, or Dreamers, Barris said they should absolutely have path to citizenship.

While Democrat Joe Neguse has said he would vote to impeach Trump and Peter Yu has said he would not, Barris said, right now, the proper thing to do is “throw (Trump) out of office through the electoral process.”

“Only if he committed a high crime and misdemeanor as president, should we in Congress overturn the democratic decision of U.S. voters,” Barris said.

Part of his message to young voters — one he spoke of at his last visit to Colorado State University — is that big government is a consistent conspiracy against young people.