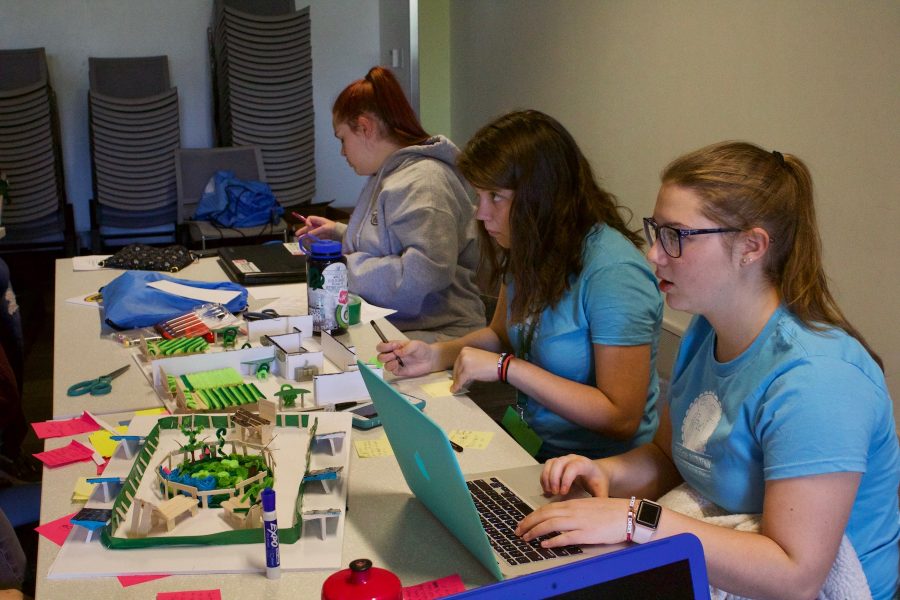 College and high school students working at the All-Woman Innovation Marathon. The event was held at CSU on September 22nd and 23rd. Participants were assigned a project for their client, the City of Fort Collins, that supported the city's Climate Action Plan. (Abby Flitton | Collegian)

After 24 hours, five lightning lessons and one quality yoga session, participants from each of the five teams had come up with a feasible carbon-reducing solution the City could implement.

Around 40 high school and college women participated in the event, either as innovators, student leaders or mentors. Participants spent the entire weekend working on and researching their proposals, peppered with 20 minute “lightning lessons” from professional females in science to inspire the process.

Each team even built prototypes of how their technology would theoretically look like, resulting in various 3D printed objects and Carl, the plastic bag sculpture.

Teams pitched their ideas to a panel of judges from Colorado State University, the City and the Energy Institute. The winning idea will be supported by the City as an actual carbon-reducing project.

The final proposals were:

Compost Man: the installation of specially designed compost boxes around neighborhoods and community gardens with a rewards system to encourage composting.

Green Grow Foco: collecting food waste from local restaurants in specialized containers, to be brought back to central station where the waste is composted in a biodigester.

ThermaFox (Front-runner and Best Failing Forward Team): the application of a special temperature-sensitive paint and coating to currently existing roofing to save fuel from heating and cooling costs.

The chosen team was ThermaFox, who wanted to make a big change by adding onto, rather than reinventing, an existing material.

Their thermal paint, to be applied onto existing roofs, changes color so more outside heat will result in a lighter colored roof, and colder weather will turn roofs a darker, heat-absorbing color, thus naturally cooling or heating a home.

“We want to make Colorado the colorful Colorado that we describe,” said Jordan Morgan, team member.

The City will support ThermaFox in the development of their project. Judges will connect the runner-up, Project Plastic, with City officials without final guarantee of support. The other teams received feedback on how to further their projects through different means.

Pretty Brainy, a nonprofit organization focused on empowering girls to study the sciences, put on the marathon at CSU. It was funded by the $10,000 grant Innovate Fort Collins Challenge awarded them.

The marathon itself has been a year in the making.

Last August, Pretty Brainy gathered a group of young women and asked them what they would want to focus given a weekend-long marathon, said Heidi Olinger, Pretty Brainy founder.

“Any way that I can help to make sure that there is still an Earth left for us is all that I need,” said Andee Craig, one of the student leaders on the board at the time and a student at Windsor High School.

Originally, the event was planned for last April, Craig said, but it was moved up to September in order to align better with the Innovate Fort Collins pitches.

The “extremely successful” results of this year’s pilot project have led to plans for a MISSion Innovation 2019, Isenhour said — an important type of event.

Women today are still largely outnumbered in the fields of science, technology, engineering and math.

So, it was important the women-only environment of MISSion Impossible—where the only men were volunteers to run the 3D printer—gave participants a platform where everyone was on equal ground.

“It showed what girls can do other than guys, because guys are usually (thought of as) the engineers, but we gave a new perspective,” said Alysa Jones, a high school innovator. “We’re as smart as guys or even smarter, and we can do as much as work as a guy can.”

Many of the innovators said they felt overshadowed or talked over when working with men in their field, especially when they were the only women in a class. Being all-women though, they said the event inspired logical ideas and a collaborative community.

“I don’t think I would have enjoyed (the event) as much if it hadn’t been all girls,” said Cienna Semsak, fourth-year zoology major.

Isenhour said the event really allowed girls to fail with a smile on their face and the confidence to keep going forward.

“The whole thing about it being all chicks is that there’s no ‘mean girls’ allowed,” Isenhour said. “It’s just a very supportive environment and that’s really important for girls at this age.”

And fortunately, the innovators seem to have heard that message quite clearly.

“It’s not about competition; it’s about collaboration,” said Mariah Wang of team ThermaFox after their pitch was selected. “And I definitely think I learned something here this weekend.”