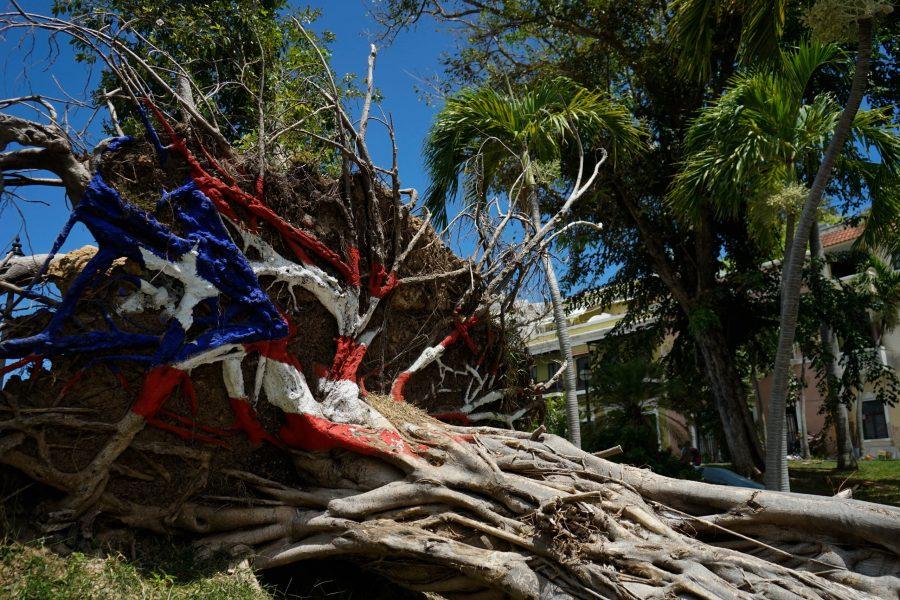 Citizens have begun to make art out of the damage in protest of the little help they have received from both the Puerto Rican and United States' governments. (Collegian | Lauryn Bolz)

It’s been one year since Hurricane Maria struck the United States territory and several weeks of destruction tore the island apart, cut the power and took lives.

But the effects of the hurricane were not exclusive to the island and the population living there. The ramifications hit people all across the world.

“I was going to school. I was working. And just kind of keeping in touch with my family and making sure they were okay and they were prepared and they had everything they needed,” said Ana Delgadillo, a Colorado State University student studying nutrition and dietetics currently taking time off from the University.

Delgadillo grew up in San Juan, Puerto Rico. She said her childhood was a very special one where she was connected to her community.

“Our culture back home is a lot about community. Everyone takes care of each other, everyone shares the same experiences because of how we grew up,” Delgadillo said. “It’s like a big family.”

Delgadillo was attending CSU when Hurricane Maria hit Puerto Rico. She said her family stayed in the country after Hurricane Irma because of the difficulty that comes with leaving, and they thought they were prepared for Maria.

Delgadillo said for many in Puerto Rico, the population gets very anxious when a storm is approaching.

“I’ve been through multiple hurricanes myself, and you always get really anxious because you can’t really tell. And it’s coming, you can’t really make it stop,” she said. “It doesn’t just come out of nowhere. You can see it coming.”

“Honestly, I just felt helpless. It wasn’t happening to me but in a way it was. Just knowing everyone there was going through such a hard time … and I couldn’t really do anything or be there support them. It’s very intense.” Ana Delgadillo, nutrition and dietetics major.

When Maria hit the island and citizens lost power, Delgadillo lost contact with her mother, who was living in a high flood area.

She didn’t hear from her for a week.

“The people that I knew were around her I was able to communicate with, but no one knew where she was, because she wasn’t where she said where she was going to be,” Delgadillo said. “So I started to get a little bit anxious and a little bit nervous. And by the end of the week, I just lost it because I really didn’t know where she was.”

Delgadillo also could not reach her sister or father, who were living in a mountainous area at the time. When she finally got in touch with her mother, she said the vocal reunion as one filled with tears.

Delgadillo’s mother told her she couldn’t talk much because she was on a stranger’s phone, but she was safe. Delgadillo said such a massive relief gave her a panic attack because of its weight.

“Honestly, I just felt helpless. It wasn’t happening to me but in a way it was,” Delgadillo said. “Just knowing everyone there was going through such a hard time … and I couldn’t really do anything or be there support them. It’s very intense.”

Delgadillo said the recovery period for her family was different for every member, but her mother was highly affected.

But Delgadillo said the recovery for her friends and family, as well as much of the rest of the island, was slow due to the lack of power.

“Without the power, it is too hard to recover,” Delgadillo said. “And that took way too long to be put back together.”

Recent reports from the Puerto Rican government estimate it will cost $139 billion to recover from both Hurricanes Maria and Irma, according to National Public Radio. Puerto Rico’s general budget for next year is less than $9 billion, meaning the cost of recovery is more than 15 times the annual budget for the island.

And this recovery is still going on. Tyler Stup, a CSU alumnus and member of the Federal Emergency Management Agency Corps, is currently in San Juan digitizing records with San Juan police to ensure that all officers are properly compensated for overtime work during Hurricanes Irma and Maria.

Stup wrote in an email to The Collegian that the effects of the hurricanes are in the details.

“Because San Juan is a tourist area the big stuff has been all done here,” Stup wrote. “But you’ll still see a stoplight that isn’t working, windows boarded up because they have been replaced, vacant lots, and buildings that have been pretty beaten up and can’t be lived in anymore.”

Stup added that, as far as he can tell as a corps member, Puerto Rico has come together after this disaster.
“The phrase ‘Puerto Rico se levanta’ (roughly translated to Puerto Rico rises) is everywhere,” Stup wrote. “And on the FEMA side, everyone is super dedicated to the recovery aspect.”
While recovery efforts continue, Delgadillo feels that both the US and Puerto Rican government can do a better job at helping citizens.
“There are a lot of people that are still suffering that really need to be taken care of,” Delgadillo said, referencing issues such as the education program in Puerto Rico.
With Hurricane Florence raging in the eastern area of the United States, Delgadillo said that the best way for citizens in those areas and students with family there should stick together as a community.

“Everyone is going through a hard time, so this is the time to show that you’re a country that sticks together and loves each other no matter what,” Delgadillo said.
Delgadillo said she hopes people in the U.S. educate themselves on what Puerto Rico does to understand it’s importance and what Hurricane Maria did to the country.
“Everyone should be educated on this topic, especially on what Puerto Rico is — what powers they have, what powers they don’t and the hardships we go through to survive as a colony,” Delgadillo said. “Really educate yourselves. Don’t really pick a side, just do something. Just talk about it.”