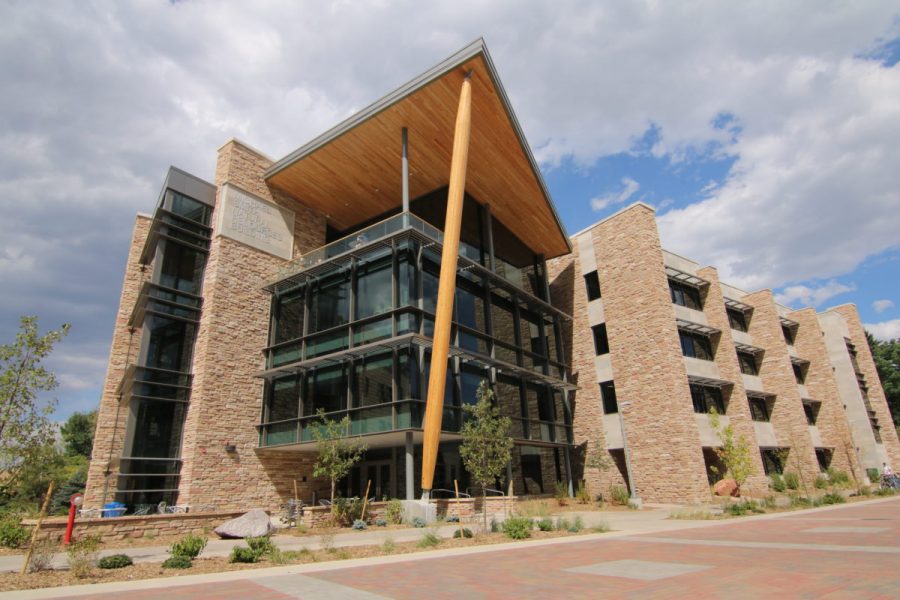 The new addition to the Warner College of Natural Resources has classrooms, study spaces, a balcony, and adds new life to the old building just off the plaza. (Joe Oakman | Collegian)

Students returning in the last week might have noticed an external change to campus with the opening of the Michael Smith Natural Resources Building, but Warner students in particular are looking forward to what’s offered inside.

Warner College of Natural Resources’ Michael Smith Building, a project planned in six-years and constructed in 15 months, opened this fall. While aspects of the original Warner Building remain intact, an entirely new section has been added, including walls of windows for natural light, state of the art technology and a patio featuring views of the campus and the Rocky Mountains.

“My first impression of the building was just fantastic,” Andrew Sampson, senior ecosystem sciences and sustainability and geography double-major said. “For anyone who’s outdoor-oriented, it’s really just a great spot. You don’t have to be a part of the college.

Sampson said his favorite aspects of the new building are the life zone sections and how the artwork changes on each floor.

Rob Novak, communications director for Warner College, worked on the project in multiple capacities, from brand-scaping to acting as the liaison to the contractors and the college.

“I’m really excited to see how it all unfolds, and see people collaborating in the spaces,” Novak said.

Upon entering the building, guests are greeted by a two-story wall covered in various plants. Novak said this was just one reason the building received a Leadership in Energy and Environmental Design Silver Certification.

The first floor also houses the Warner College’s first ever Student Success Center. Intended to offer resources and help to students, the center is stocked with a new team of student ambassadors prepared to share their knowledge, Novak said.

“They’re going to staff the front desk and help us promote the college to prospective undergraduate students,” Novak said.

The four-story building displays murals of different life zones: the plains, the foothills, the sub-alpine and the alpine. Each floor represents one of these four zones, from lowest to highest, Novak said.

In addition, each floor includes artifacts that share the same theme. For example, the alpine level features murals of skiers and snow.

Novak said the building will soon have geologic samples in some of the stairwells, depicting the different environments at each elevation. The display cases will soon be filled with different artifacts, including one dedicated to petrified wood.

Warner College Dean John Hayes said he thinks the building is beautiful and transformational for the college as a whole.

“We’re really happy,” Hayes said. “This building has done so much for us. It has both enabled us to improve and enhance our teaching facilities for the students and bring together the administration of the college.”

Looking to the future, the building still has some renovation on the horizon. Novak said the original building will adopt some of the same décors and will have minor enhancements. The process is expected to be completed by the end of the fall semester, Novak said.

“I’m really excited to see how it all unfolds and evolves,” Novak said. “We hope that students from all over the university come and enjoy what we have her.”

Editor’s note: A previous version of this article described the building as being a “six-year construction project,” but did not clarify that the construction itself took 15 months after six years of planning. This article has been updated to clarify this distinction.

Collegian Audrey Weiss can be reached at news@collegian.com or on Twitter @Audkward.