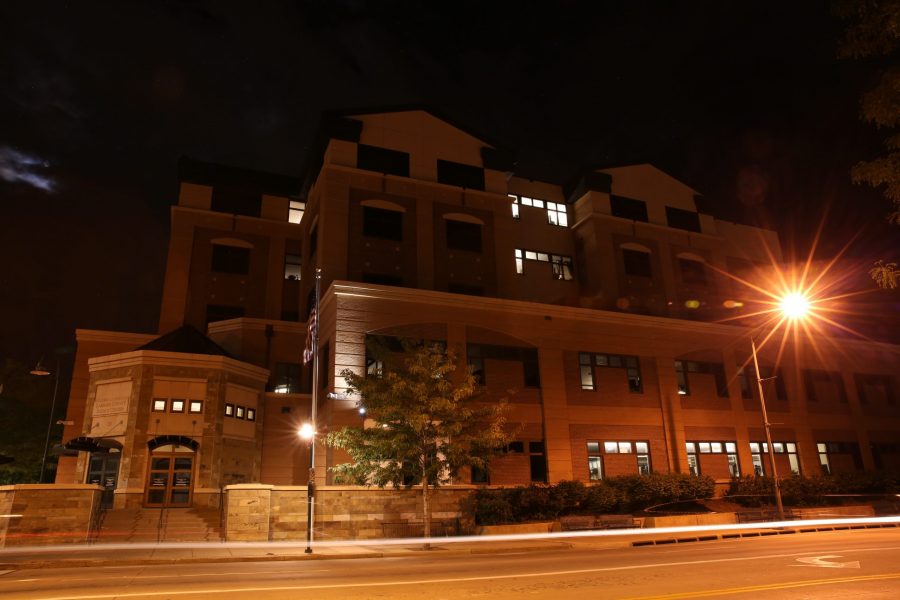 The Larimer County Court House is pictured on the night of Aug. 22. (Forrest Czarnecki | The Collegian)

Asa Ben-Hur testified that he had no idea his behavior made former assistant professor Christina Boucher uncomfortable until Computer Science Department Chair Darrell Whitley told him Boucher had complained.

In a lawsuit filed against the University June 15, 2017, Boucher claimed she was denied tenure and forced to resign following her complaints of sexual harassment and suffered from emotional trauma. According to the Coloradoan, Boucher’s psychiatrist Patricia Tahan testified that Boucher had developed acute stress disorder due to her allegation and the retaliation.

Boucher said the harassment began summer 2012 before she was hired.

Boucher claimed in the lawsuit that Ben-Hur stared at her chest and backside during a dinner attended by other professors and once she started working at the University.

“I don’t think I ever looked at Dr. Boucher’s breasts consciously,” Ben-Hur said.

Ben-Hur sat on Boucher’s hiring committee, and he said he took Boucher on a driving tour to Horsetooth Reservoir and downtown Fort Collins, as he had done for each potential assistant professor.

While Ben-Hur said he received positive feedback from other candidates, Boucher said she felt uncomfortable when driving to the reservoir.

“She asked him to take her back to her hotel, but he refused, telling her to ‘relax, because she looked tense,” said Sam Cannon, Boucher’s attorney, during opening statement Tuesday.

Ben-Hur testified that he didn’t recall being asked to return to her hotel and would have taken her back if he had known.

Key points in the trial:

Christina Boucher filed a lawsuit against CSU on June 15, 2017, claiming she faced retaliation after reporting professor Asa Ben-Hur sexually harassed her.
The harassment is said to have started during summer 2012 before Boucher started working at CSU, during her initial interview.
On Oct. 28, 2014, Boucher reported to Computer Science Department Chair Darrell Whitley that Ben-Hur would stare at her chest and backside in a sexual manner.
Boucher alleged that her tenure was affected after she reported the harassment. According to court documents, she received a negative evaluation from the tenure and promotions committee, which Ben-Hur sat on.
CSU disputed Boucher’s claims and asked a judge to rule that the case has no merit May 28, 2018.
Boucher’s lawyers filed a response on June 11, claiming that there is a culture of gender discrimination at CSU.
On June 25, Larimer County District Court Judge Stephen Jouard denied CSU’s request for summary judgment.

Boucher notified Whitley of the incident, which she said then affected her ability to receive tenure.

In a previous statement to The Collegian, Boucher claimed Ben-Hur was allowed to continue to evaluate her after she filed the harassment report, which contributed to her loss of tenure, Boucher said.

During testimony, Ben-Hur said that Boucher’s promotional and tenure meeting was going well for her until he brought up his concerns with her behavior.

Ben-Hur claims this incident is what caused a rift between him and his former colleague, Boucher.

“It was more than uncomfortable. It made me not want to be around Dr. Boucher,” Ben-Hur said. “It was an experience that stayed with me for a long time afterward.”

This trial is set to continue into next week, with the verdict planned to be released on Wednesday, Aug. 29.

Collegian reporters Emma Iannacone and Julia Trowbridge can be reached at news@collegian.com, or on Twitter @EmmaIannacone and @Chapin_Jules.