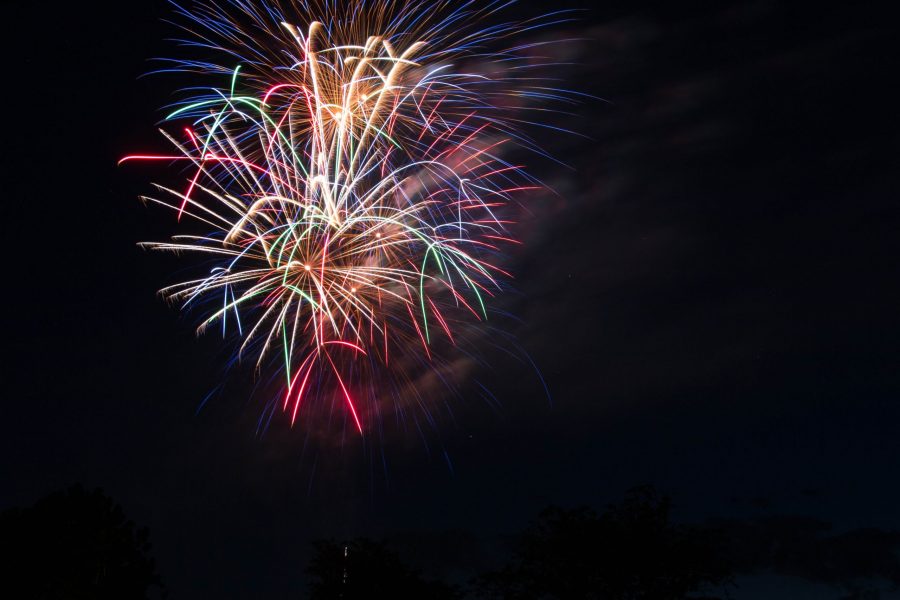 With high fire danger across the state of Colorado, the City of Fort Collins emphasized the risk of Independence Day celebrations leading up to the holiday. According to local officials, those efforts appear to have paid off.

This is 94 fewer complaints than 2017, when FCPS reported 253 total calls during the same time period.

“While there is no way to know for sure (why there was a drop in calls), I think it is safe to assume that has to do with the City’s education program,” said Officer Dustin Wier. “Another factor is that we have a number of fires going on in the state right now and people were more aware of that and cautious, because no one wants to be the one to start that fire.”

Over the last four years, the City has seen a decline in the number of complaints and citations issued due to illegal fireworks used during the days surrounding the Fourth of July. From its four-year peak of 413 complaints in 2016, this year marks more than a 50 percent decrease.

Wier said officers need probable cause to issue a citation. This means the reported presence of fireworks alone is not sufficient to issue a ticket, and officers have to be able to substantiate a potential incident, even if there have been multiple complaints from different witnesses.

“Just because we get a call, doesn’t mean we can write a ticket,” Wier said. “Oftentimes, a lot of our (fireworks) enforcement comes from just driving around. If we can see or hear someone launching fireworks from the car, that helps.”

Wier said police require further evidence, such as debris in the road indicating where the violation took place.

Sometimes callers provide general details in their complaint and officers cannot locate the source of the violation. Other times, officers find that involved parties left the scene before they could arrive, Wier said.

All fireworks, including sparklers and snakes are illegal to sell, possess or use in city limits. Possession and use of fireworks of any kind without a permit may result in a municipal court summons, a fine up to $2,650 and confiscation of the fireworks, according to FCPS.

Larimer County Commissioners voted to implement a fire restriction July 3 that also prohibited the use of fireworks in unincorporated Larimer County, wrote Madeline Noblett, Poudre Fire Authority public affairs and communication manager, in an email to The Collegian.

Between June 30 and July 9, PFA responded to 15 fire-related calls, two of which were related to fireworks, Noblett wrote.

Noblett wrote at 10:39 a.m. on July 4, PFA firefighters responded to a small fire near Willox Lane. Firefighters extinguished the fire behind the home and found evidence of fireworks near the burned area.

Additionally, PFA firefighters were dispatched July 9 at 10:06 p.m to extinguish a small grass fire in the area of Larimer County Road 23 in Bellvue, south of the north dam. Witnesses said people had pulled up in a vehicle, shot off some fireworks and left the scene, Noblett wrote.

Noblett wrote this data is comparable to last year’s numbers. During the same date range, PFA crews responded to 15 fire-related calls, one of which appeared to be fireworks-related.

In 2016, PFA dispatchers responded to 18 confirmed fire calls from July 1 to July 5, according to reports from The Coloradoan.

Noblett noted not all of the calls in 2017 or 2018 involved actively fighting a fire. In some cases, crews responded, investigated the 911 caller report and did not find any evidence.


“We’ve done this education for many years and believe that people are receiving the message,” wrote Noblett.

The campaign provided safety and legal information through free yard signs, variable message boards on Interstate 25 and the Larimer County-Fort Collins city limits, near the fireworks stands operating in the county and through a wide variety of other means. The campaign also featured messages geared toward respecting pets and veterans, Noblett wrote.

This year, 7 dogs and 1 cat were taken in by the shelter on Independence Day. Last year, the shelter took in the same number of dogs and 12 cats. Weingardt wrote that this year the shelter had more success in quickly reuniting owners with their lost pets.

“What’s noteworthy about this year is that our overnight officer was able to locate the owner and return home every animal they came in contact with,” Weingardt wrote. “It was a long night for our overnight officer but no animal had to step a paw in our shelter as they all went right back home.”

Noblett wrote that PFA also believes there is a heightened awareness of the current dry conditions and fire danger.

“As a safety-obsessed organization, we appreciate the people who chose to respect the law and the community by not using fireworks,” Noblett wrote. “We want people to enjoy a happy and healthy holiday and hope each year that no one has to suffer a fire or injuries at the hands of fireworks.”

Collegian News Editor Natalia Sperry can be reached at news@collegian.com or on Twitter @Natalia_Sperry.