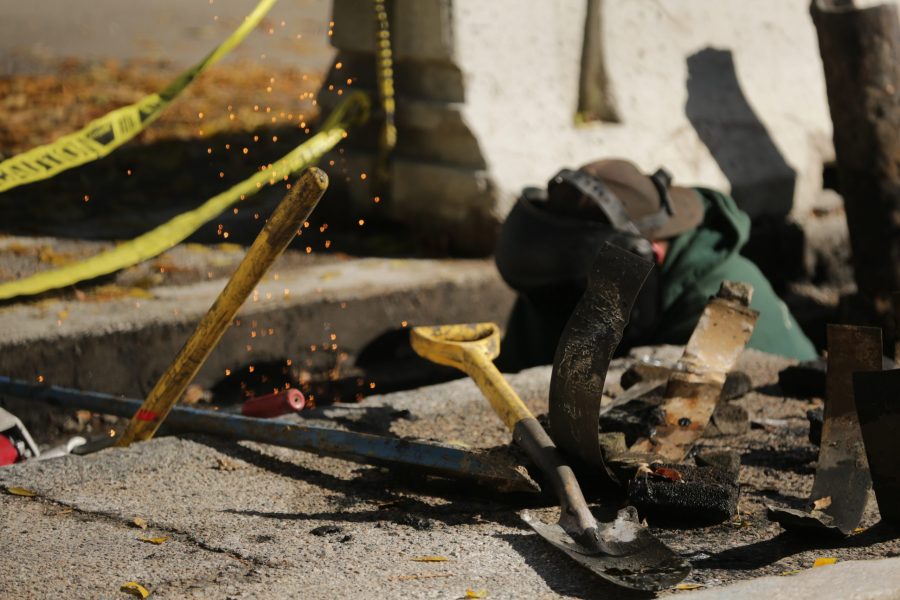 Metal strips and construction equipment are strewn around a construction zone while a construction worker welds a pipe along West Plum Street near the Colorado State University Transit Center on Tuesday morning. Workers were replacing and rerouting a condensation line underneath the roadway. (Forrest Czarnecki | The Collegian)

Laporte Avenue between the North Shields Street intersection to Wood Street will close until the end of construction, scheduled for August 31.

The intersection itself will remain open and those living in the nearby neighborhoods will have access to their homes at all times, according to the City. However, there may be periods when parking access is limited from Laporte Avenue.

City construction crews will replace an undersized stormwater pipe and 95-year-old sanitary sewer pipe. That is approximately 1,600 feet of stormwater pipe, 11 inlets and 650 linear feet of old wastewater pipe, in addition to repairing numerous water valves in the 900 and 1000 block of Laporte Avenue.

The street, currently composed of concrete, will then be reconstructed with an asphalt surface to reduce road noise and maintenance issues, according to a release from the City.

Construction will occur typically on weekdays between 7 a.m. and 6 p.m., according to the City. Those in the area can expect trenches, earth mounds, dust and noise from large equipment directly in front of their property.

Barricades and fences will also be used to mark areas of excavation. For safety reasons, the City urges residents, commuters, bike riders and pedestrians to follow all signage instructions and stay away from the marked areas.

This project is one of many infrastructure improvements scheduled for the year as part of the annual pipe replacement program.