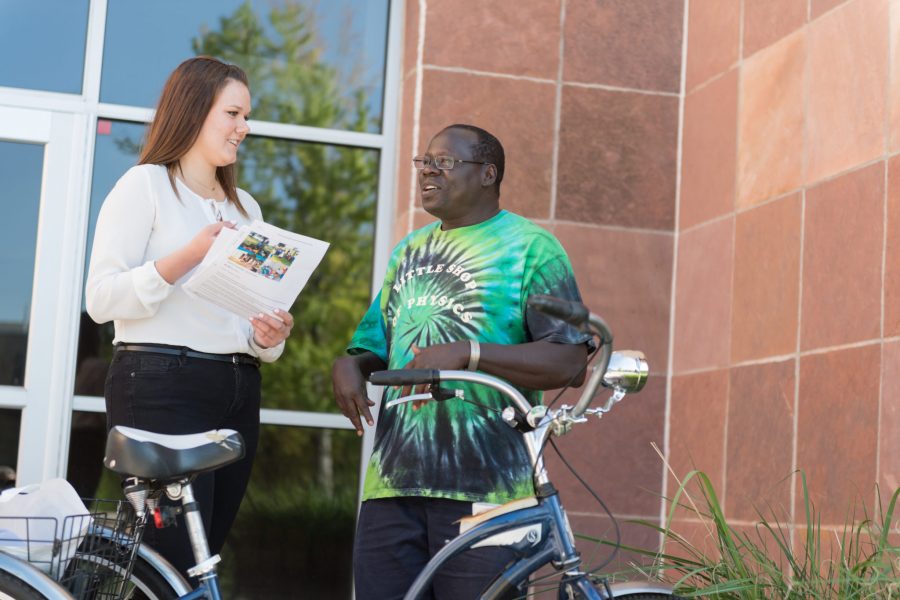 Laura Schreck and Robert Serunjogi stand in front of the engineering building at Colorado State University where they first met. (Courtesy of Bill Cotton, CSU).

One seemingly unexpected duo at Colorado State University has worked to change the lives of children halfway around the globe with resources at home.

CSU’s Robert Serunjogi and Laura Schreck created an initiative three years ago to build schools and to supply services in Serunjogi’s native Luwero, a Ugandan village which, for years, has been plagued by civil war and disease, the effects of which have orphaned many children.

“The main purpose of this initiative is to take some of the resources we have here and bring them to kids over there and provide an education, basic health and resources for the kids,” Schreck said.

Since the spring of 2015, the duo has raised about $37,000 in donations, funding the completion of two schools, the current construction of a third school and resources such as desks and chalkboards, as well as medical supplies such as Neosporin that are essential to students, many of whom don’t wear shoes.

Schreck, an alumna of Monarch High School who is currently getting her master’s degree in health and exercise science, said she found out about the conditions in Luwero in a chance conversation with Serunjogi, a CSU facilities management employee and student working towards a teaching degree.

Serunjogi has personally faced his own hardships and difficulties, Schreck said, especially during the years he spent growing up in Luwero where he contracted polio at a young age, partially paralyzing the right side of his body.

“He grew up in a war-torn village, his dad was killed by the government when he was in seventh grade, his wife passed away from cancer shortly after they met and he is currently out in Uganda not only to build the third school, but his mom who is older, is sick these days and his brother, as well as a lot of his family, is HIV positive,” Schreck said. “That’s just a brief list of the hardships.”

Upon hearing about the conditions in Luwero and Serunjogi’s efforts to raise money to build schools there, Schreck set up a GoFundMe campaign and began working with Serunjogi.

“I had never done anything like this, but I figured that I had some skills that Robert didn’t have, and the worst-case scenario was that nothing would happen,” Schreck said. “$500 would’ve just covered shipping, but once we got $1,000, then $5,000 and then $9,000, I thought, ‘okay, he’s going to need some help,’ and that’s when I really stepped in and became a partner on the project.”

Schreck and Serunjogi have worked together since, taking up respective roles. Schreck said because English isn’t Serunjogi’s first language and it can be hard to understand Serunjogi at times, Schreck takes care of contacting potential donators as well as organizing and managing finances, putting together presentations and working with the bank and GoFundMe.

Schreck said Serunjogi also puts together presentations and maintains connections in Luwero, contacting the village once a week to see how everything is progressing and what needs to be done.

Serunjogi was unavailable for an interview, as he is currently in Uganda to inspect the construction in Luwero.

“Robert is really the inspiration behind it all really,” Schreck said. “Something that he really stresses is that when the civil war came through the village the first time when he was there, all the kids who had an education or had a skill could run and leave and go find safety. But all of the people who didn’t have an education had to stay, because all they had was their land, and that was their livelihood. He believes that by having an education in Uganda, you gain safety and mobility.”

Now, as Schreck and Serunjogi manage the construction of their third school in Luwero, Schreck said they look forward to reaching future goals.

Schreck said the current schools mostly cater to elementary school children, but she and Serunjogi would like to see classes offered up to an eighth grade level.

There is currently no electricity in the schools, and although Schreck said she and Serunjogi would like to supply the schools with technology such as laptops, this currently cannot be done without electricity.

In order to solve this problem, Schreck said she and Serunjogi are working on applying solar panels to the schools as a main source of electricity.

Schreck and Serunjogi are also working with CSU’s Little Shop of Physics, which has donated $9,000 to the duo in the past, Schreck said.

“Brian Jones, a well-known physics professor at CSU who’s in charge of Little Shop of Physics, specializes in bringing hands-on science labs to underserved children,” Schreck said. “Next summer, Brian Jones, Robert and I will actually be going to the village to build a whole science lab curriculum out there to teach it to the teachers and to teach the kids.”

In an email to The Collegian, Jones wrote that he has known Robert for many years and had Schreck in one of his classes.

“Laura was in my class and she and I were talking about her volunteer work and she brought up the work with Robert,” Jones wrote. “It became clear that she was doing a big, big effort that we could help them.”

Some of the money raised for this project came from the sale of eclipse glasses from the 2017 solar eclipse, Jones wrote.

After Jones, Serunjogi, and Schreck go to Luwero next summer, Schreck said they’ll see if it’s possible to bring groups of CSU students to the village continuously every year.

Schreck said her advice to CSU students who want to make the world a better place is to first recognize the power and abilities they have just by being college students.

“My big thought is that I want people currently at CSU to realize that just by being where they are, they have lot of power and can help a lot of people,” Schreck said. “Sometimes helping someone doesn’t mean you have to look far.”

Schreck and Serunjogi’s GoFundMe page can be found at https://www.gofundme.com/robertssecondphase.

According to a ​2019 article​ published by ​The Collegian, the three functioning schools in Luwero host 190 students and can be transitioned into a sleeping space for orphans at night. There are currently 2.5 million school-aged orphans in Uganda, and Luwero is home to 100 of them.

Serunjogi said in the article that he plans to bring Little Shop of Physics to Luwero.

Collegian news reporter Matt Bailey can be reached at news@collegian.com or on Twitter @MattBailey760.