The Rocky Mountain Collegian • May 21, 2018 • https://collegian.com/articles/news/2018/05/ascsu-upholds-decision-to-not-ratify-executive-cabinet-member-accused-of-doxxing-racist-social-media-post/ 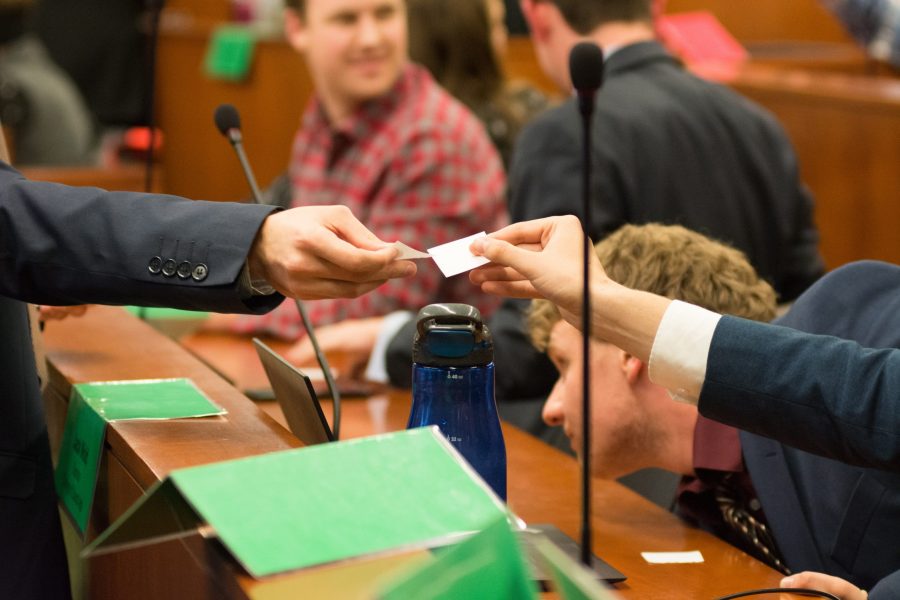 Members of the ASCSU Senate receive voting ballots on May 2 to vote on the new Chief Justice Madison Taylor. (Colin Shepherd | Collegian)

Editor’s note: The Collegian is not publishing the Reddit screenshots due to ethical concerns that the images will cause harm to others.

The Senate body of the Associated Students of Colorado State University upheld their decision to not ratify the candidate for deputy director of governmental affairs during a special Senate session held May 16.

CJ Ash, the candidate for deputy director of governmental affairs, was not ratified by the Senate for a second time, with a secret ballot vote of 6 yes votes, 8 no votes and 1 abstention.

Ash was the only executive cabinet candidate not ratified by the Senate during the May 2 session. The Senate had concerns regarding Ash’s ability to represent constituents after members of Students Against White Supremacy alleged that Ash doxxed a member of their organization and alleged that Ash made a racist post on Reddit, which senators considered racist towards people who identify as Asian, Asian-American or Pacific Islander.

Ash appealed the Senate’s decision to the ASCSU Supreme Court, who unanimously approved his appeal due to concerns regarding the ratification process on May 2. ASCSU Chief Justice Madison Taylor said the Supreme Court believed sections of the ASCSU Declaration of Rights and the ASCSU Code of Ethics were not followed.

ASCSU President Tristan Syron asked the Senate to disregard the Reddit post because he was advised by the Office of Equal Opportunity to disregard social media posts when he conducted interviews for members of his executive cabinet in order to give a fair evaluation to all applicants.

“We need to evaluate (if it’s) fair that we are looking at one person’s (social media) instead of another, in that OEO fair evaluations things to consider,” Syron said. “(The question on the floor tonight) is not, ‘Who is the most qualified person?’ It is probably simply, ‘Is the candidate before you able to perform the requirements of the job description?’ That’s the only thing you are asking yourselves.”

(The question on the floor tonight) is not, ‘Who is the most qualified person?’ It is probably simply, ‘Is the candidate before you able to perform the requirements of the job description?’” Tristan Syron, ASCSU president

Ash apologized to the Senate for the Reddit post, which he said was posted five years ago.

“I was pretty ignorant back then when it comes to matters of race and culture and ethnicity,” Ash said. “To anybody that I’ve upset or made to feel unwelcome at CSU, I sincerely apologize. I really can’t excuse it, but I hope to work forward with a better approach, with a greater understanding of how my actions can hurt people, so I’m sorry.”

Ash said he originally wanted to advocate for conservative and libertarian students, but he would focus on the needs of all students in the future.

“I have to think about the greater student body and not just conservatives,” Ash said. “That whole political side of me, whether I’m ratified or not, that’s over. It’s just going to be more of an approach for everybody.”