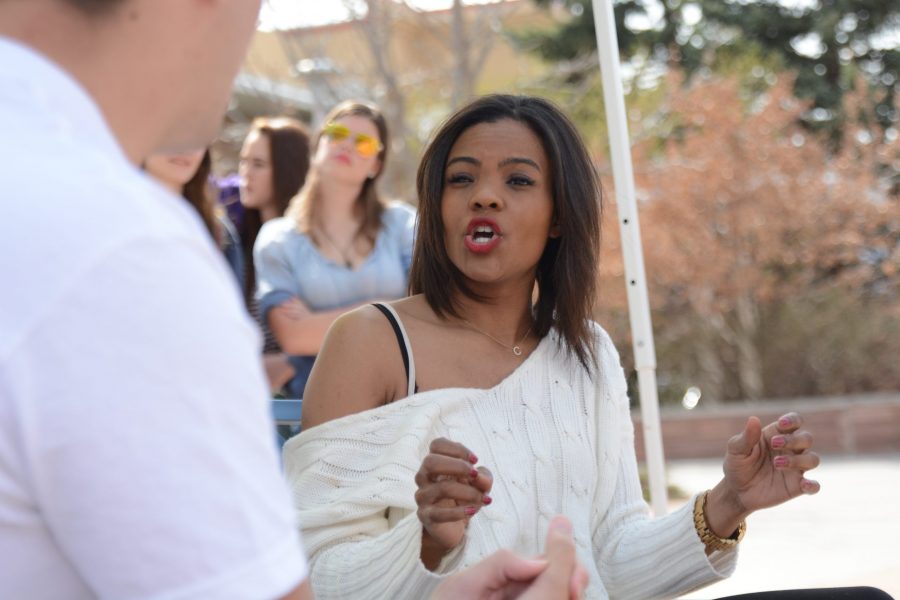 In the wake of conversations about free speech and accusations of affiliation with white supremacy, the Colorado State University chapter of Turning Point USA invited the national organization’s director of communications, Candace Owens, to speak with students on the Plaza.

Owens discussed issues of race, free-market economics, taxation and more with students on the Plaza on Tuesday afternoon.

Isabel Brown, president of CSU’s chapter of TPUSA, said the intention was for Owens to engage in a “Change My Mind” style tabling event to open up a dialogue about political differences on campus.

“Basically what we stand for is three things: fiscal responsibility, limited government and free markets. No more, no less than that,” Brown said. “Unfortunately, some individuals on our campus have conflated us with other ideals that have nothing to do with what we stand for or what we promote, or anything that we’ve even talked about.”

In an interview with Collegian TV, Owens said she believes many of the white supremacists who show up claiming to support Charlie Kirk are part of an effort by the left to delegitimize all the things that Charlie Kirk and the organization talk about.

“We are separate (from those white supremacist organizations), so there’s nothing more we can do,” Owens said. “It doesn’t make sense, they can have their own rallies, they know that Turning Point isn’t a home for them, that we denounce them all the time, so what are (they) showing up for?”

The Collegian could not find any evidence to support collusion between white supremacist organizations and leftist groups.

Turning Point and Owens were on the Plaza until about 4 p.m. While most of the interactions were civil at the TPUSA tent, where the group had set up two chairs — one for Owens and one for a questioning student — sources said tensions rose when members of TPUSA and Owens approached the Young Democratic Socialists of America’s table across the Plaza.

“They came up, they surrounded the table entirely, they all whipped out their phones and started recording it, shoving their phones in our faces,” Ross said. “…(Candace Owens) tried to accost me, in particular, about issues she was having with socialism.”

While speaking with students on the Plaza, Owens said she has a right to express different political and economic views than other Black individuals, in response to questions and comments by students regarding how her identity and political beliefs intersected.

Owens said, having previously identified as a liberal herself, she believes Black people have been harmed by liberal policies in America.

“Every single thing that Black people are going through in this country is because of Democratic policies, because of the welfare system and because individuals like you who don’t allow us to have different ideas and believe in free market capitalism,” Owens said to SAWS member and ethnic studies graduate student Erica LaFehr, who was engaged in a debate with her about the topic.

Following a heated discussion about race with Owens, LaFehr expressed frustration at Owens’ message in an interview with the Collegian.

“There’s this assumption that if you’re a person of color, or you identify as a marginalized identity, that you somehow can’t perpetuate oppression and can’t perpetuate white supremacy, and that is absolutely inaccurate,” LaFehr said.

“That is all Turning Point is about, is advocating for people to be able to keep their money and give it away when they want to, not when the government steals from them. I don’t think that’s that crazy of a concept,” Owens said.

In response, Drezen said anyone who values money over their common man has lost their humanity.

Following the discussion, Drezen said he believed Owens’ goal was not dialogue but rather dissonance.

“I believe she’s here to rile people up. It’s kind of unfortunate, you know, when you get a group of people who are very set in their ways who are just out to kind of make a point,” Drezen said, in an interview with The Collegian. “I didn’t feel very welcome there, I didn’t feel that much was exchanged.”

In an interview with Collegian TV, Owens said Turning Point is not advocating that everyone has to agree, but rather that dialogue is important.

“At our organization, we have people that adamantly disagree with each other on different topics. What we’re advocating for is the freedom to express those disagreements in a civilized manner,” Owens said.