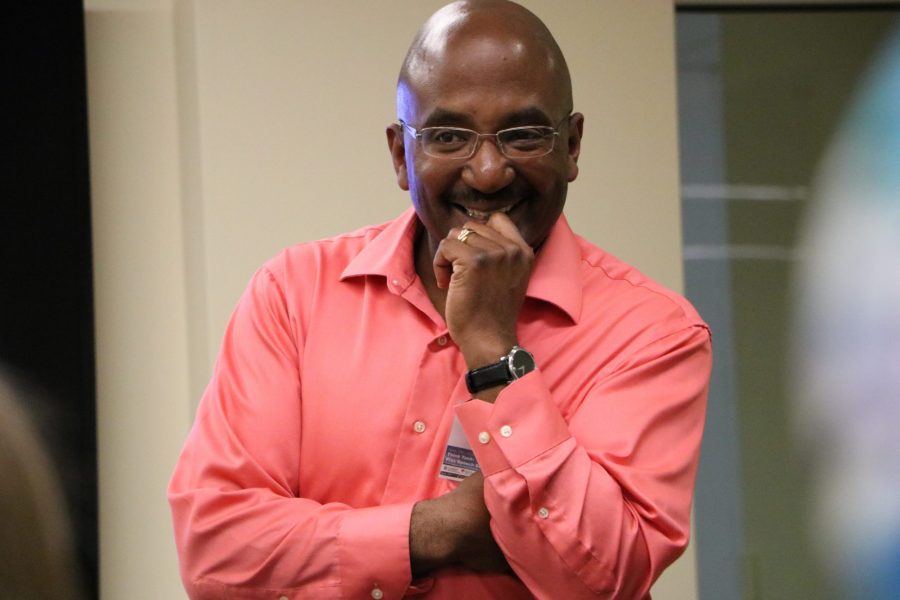 During the Think Tank: Free Speech Summit held in the Lory Student Center on Friday April 13th, Dr. Craig Chesson listens to an audience member share an interesting story during his speech called This Includes Me-the Impact of Hate Speech Targeted at one of my Social Identities. (Matt Begeman | Collegian)

The Office of the Vice President for Diversity hosted the “Think Tank: Free Speech Summit” on Friday, April 13 to discuss free speech within college campuses.

The event began with opening speeches from Dr. Shannon Archibeque-Engle, director of assessment and strategic initiatives for the VPD, and Mary Ontriveros, the vice president for diversity and the chair for Colorado Assistance of Diversity Officers in Higher Education (CoADOHE).

The summit was comprised of three breakout sessions, featuring a variety of discussions related to free speech, and had 150 people registered to attend.

The event centered around balancing the freedom of speech while protecting students with marginalized identities.

“One strategy, of course, could be a deliberate and purposeful choice to ignore the issue all together… and we have actually heard people talk about how they believe that that is whats happening on these campuses,” Ontriveros said. “Or, we could choose to learn more and to educate our (faculty, students and staff) about the issue. In my view it is essential in higher education, and to our students, that we opt for an educational strategy.”

Archibeque-Engle explained why an event like this is important.

“It is a phenomenal opportunity for us to engage in this conversation, to honor the first amendment which is incredibly important to political discourse on the campus which is what universities are all about and to support our students with (marginalized) identities so they feel safe enough to learn” Archibeque-Engle said.

President Tony Frank addressed questions about the university not speaking out against certain groups on campus.

He explained in the past, while in the position of provost office, he had been requested to encourage a professor who didn’t believe in climate change sciences to stick to his own field of study, as some felt it was discrediting CSU. Frank explained that he declined, adding he felt it would be wrong to muzzle a faculty voice because it was unpopular.

He further stated that this type of situation is analogous to some situations on campus.

“We have to work to make sure that we are open to (all different points of view),” Frank said. “You don’t really want the university and administration to be the arbiter of who can and can’t say what.”

The event moved on to a discussion about marginalized identities and the freedom of speech, entitled “Supporting Impacted Students, Lessons Learned.”

This discussion was led by Dr. Kathy Sisneros, the assistant vice president for Student Affairs, Janaye Matthews, a peer coordinator in the Black and African American Cultural Center and Selam Tewahade, a peer coordinator for the BAACC, an inclusive community assistant for Residence Life and a member of the President’s Multicultural Student Advisory Counsel.

“In an institution, as you know, nothing moves quickly,” Sisneros said. “That does not mean that there’s not progress being made.”

Sisneros also addressed the frustration students have over hate speech on campus and what some students saw as a lack of action.

“One of the greatest frustrations on our campus just like a lot of others (is that) we have hateful rhetoric happening out on the plaza right now,” Sisneros said.

Tewahade advised students who are not being threatened to stand up for marginalized groups even when they are not in the room, adding “silence is compliance.”

President of CSU-Pueblo, Dr. Timothy Mottet, expressed the importance of the summit, and of discovering what free speech really means.

“This is an ongoing conversation that is really just beginning… there’s a lot in front of us. (So) in the spectrum I think we’re at the front end of the conversation, not in the middle or toward the end,” Mottet said. “We’re starting the conversation.”

Collegian reporter Meagan Stackpool can be reached at news@collegian.com or on Twitter @meaganstackpool.