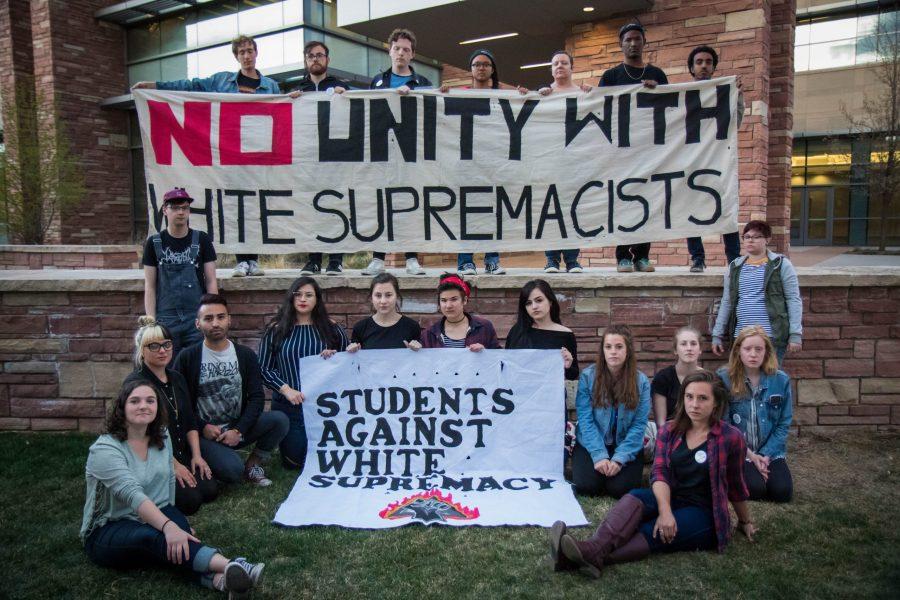 Students Against White Supremacy, a coalition of students who aim to expose and remove white supremacy on campus, hold the banners they've been displaying for events like disrupting CSUnite and tabling on the plaza to further education on these issues. (Julia Trowbridge | Collegian)

A change.org petition created by Students Against White Supremacy, another student group new to campus, was posted online Monday, April 9. As of Wednesday, April 18, the petition had 130 signatures.

The efforts of SAWS are focused on creating a conversation on campus that acknowledges white supremacy, especially following the appearance of white nationalists at the Charlie Kirk event in February.

Since the creation of the petition, TPUSA communications director, Candace Owens, spoke on the CSU Plaza. Erica LaFehr, a member of SAWS, was filmed responding to Owens and the video has since been shared on social media by Owens, who has about 275,000 followers on Facebook. LaFehr wrote in an email to The Collegian she has been inundated with violent messages via social media.

“As a single mother, this has been incredibly nerve-wracking for myself and my daughter, not to mention all my friends and family who love me,” LaFehr wrote. “At the same time, it is unsurprising given the fact that, prior to TPUSA, Owens had constructed an entire site dedicated to doxxing people whose viewpoints differed from hers called Social Autopsy.”

TPUSA’s removal would have to come from the University, rather than the petition. In an email to The Collegian, Mike Hooker, director of public affairs and communications, explained student organizations can face disciplinary action as the result of violation of policies set by the University.

“CSU has an established process for recognizing student organizations, part of a system of student governance that has been developed through generations of students steadfastly fighting for the right to organize without undue influence from the administration or outside organizations,” Hooker wrote. “All student clubs and organizations enjoy rights and privileges associated with official recognition by the University.”

To LaFehr, TPUSA does not feel in-line with the notion of ‘Rams take care of Rams.’

“I personally don’t feel cared for right now,” LaFehr wrote. “I know countless others who didn’t feel safe after the multiple instances of the ‘free speech wall’ and the appearance of actual Neo-Nazis on our campus. So, we started this petition to have TPUSA removed because of the toxicity that it promotes.”

we started this petition to have TPUSA removed because of the toxicity that it promotes – Erica LaFehr, member of SAWS

According to TPUSA’s website, their purpose is to educate students on importance of fiscal responsibility, free markets, and limited government. Isabel Brown, chapter president of TPUSA at CSU, declined to comment on the petition to remove TPUSA from campus. Brown did respond to sentiments expressed by SAWS at CSUnite.

“Turning Point USA at CSU has repeatedly, and will continue to, denounce groups like the Traditionalist Workers Party and other parasitic white supremacist groups and organizations,” Brown wrote in a statement to the Collegian following CSUnite. “…Turning Point USA at CSU stands for the two pillars of limited government and free markets—no more, no less—and we invite any student who may disagree with our organization to engage in productive dialogue with our student leaders moving forward.”

SAWS interrupted the CSUnite demonstration on March 29 and said they do not support a false sense of unity since incidents of hate happen on campus. LaFehr said in an interview with The Collegian she did not feel CSUnite could truly work to unite.

“How do you unite with people with inherently violent ideas?” LaFehr said. “… You’re forcing the oppressed to side with the oppressor for the sake of everyone getting along.”

Members of SAWS explained TPUSA is their primary focus, because they are concerned that the nationwide organization may use members who are also student government representatives to decrease funding for progressive student organizations. Scott described TPUSA as “auspiciously insidious.”

“We aren’t targeting the College Republicans, we aren’t targeting Young Americans for Liberty, and that’s for a very specific reason,” Scott said. “They don’t have a track record of recordings of their leaders saying that ‘the reason we exist is to target campus elections.””

Scott explained the presence of SAWS is designed to help change the availability of knowledge around white supremacy on the CSU campus.

“By the essence of our group existing, we’re creating a larger conversation,” Scott said.

Collegian News Editor Rachel Telljohn and reporter Julia Trowbridge can be reached at news@collegian.com or on Twitter @racheltelljohn and @chapin_jules.