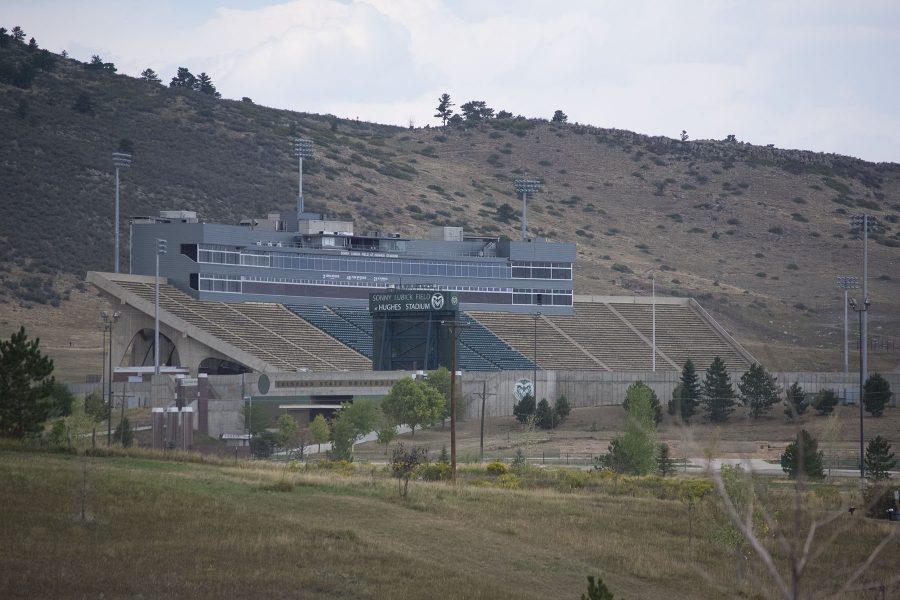 Hughes Stadium is on the way to demolition, but Colorado State University PhD candidate, Aaron Million, feels is does not have to be that way.

Million wants the University to repurpose the concrete base of the stadium by turning it into a pumped storage hydropower plant.

During the day, when electricity is highly demanded and consequently more expensive, water from Horsetooth Reservoir would flow down to the plant, generating electricity via turbine.

The electricity would be transferred to the electrical substation at Overland Trail and Drake Road and distributed to the grid. All the equipment would be underground so it would not disturb nearby residents.

At night, when electricity demand and prices fall, the plant would pump the water back up to Horsetooth. This process would be repeated daily and the difference in energy costs would generate a positive revenue stream for the university, as well as promote green energy.

Pumped storage systems act as batteries, ideally storing the energy unused at night and releasing it when demand is high during daytime. Their ability to respond quickly to energy demands stabilizes the volatility of solar and wind energy, according to the Department of Energy.

With Horsetooth Reservoir 222 ft. above the stadium and an electrical substation nearby, Hughes is in the ideal location for pumped storage development and an ideal infrastructure project for CSU, Million said.

“As the supposed ‘green energy’ campus, why aren’t they (CSU and the Board of Governors) seriously considering this?” Million said.

About a year and a half ago, Million presented his idea to various University and City staff but has not made much progress since.

Fred Haberecht, campus planner, said when CSU facilities engineers looked at the proposal, they found it would take centuries to recoup the cost of building it. He also said Hughes would not be able to serve as a water tank.

“We have a football stadium that is not a vessel,” Haberecht said. “No civil or structural engineer would ever consider it so–it is inconceivable it could be used as a ‘pond.’”

The University declined to provide further technical details, stating they did not want to give Million’s proposal unwarranted validity.

Haberecht said pumped storage is just one of many suggestions the University has received about what to with Hughes Stadium. Facilities did not study the idea further because they did not believe it warranted a closer look.

Million disagreed with Haberecht’s statements and said the University should pause the demolition of Hughes to at least do a structural evaluation of its base.

In an effort to provide more proof of concept, Million brought in the senior capstone engineering class, who did their own calculations for the operational feasibility of the project. He also worked with Neil Grigg, a civil and environmental engineering professor.

Using rough estimates of Hughes and other standard pump/turbine calculations, Million, Grigg and the senior design team estimate a Hughes hydropower station could generate between 31,000-40,000 kwh of energy per day and use 37,000-43,000 kwh per night.

“I don’t think Aaron is as crazy as some people think,” said Andrew Harris, a senior on the project design team. “The engineering works out. I think the school should really look at it again.”

In an email to The Collegian, Grigg wrote the idea is innovative and could work in theory but due to the many currently unknown factors involved, he could not recommend the University look deeper into the proposal.

As of now, both the economic and structural feasibility of the project are up for questioning.

Million’s side estimates pumped storage could bring in between $670,000-1.9 million of net revenue annually, using residential time-of-use electricity rates from Xcel Energy. Harris said he was confident repurposing costs would be $40-50 million, based on their research of similar projects.

Hughes’ demolition, which was approved in fall, has completed the abatement process and moved onto actual demolition, where the contractor begins to take the structure apart.

Tony Flores, facilities project manager, said they were confident the demolition, which will last through summer, will stay within the approved $5.5 million budget.

They will also work with the contractor to have as much of the deconstructed materials resold or repurposed, which would lower the cost of demolition, Flores said.

In February, the Board of Governors also voted to annex the property into the city. CSU anticipates filing for a Application for Annexation requesting a T-Transition zoning by late April, according to Nancy Hurt, managing director in CSU Research Foundation, Real Estate Office.

CSU is currently looking at developer applications for the land. Once chosen, the developer will complete the final zoning designation with the City. Based on CSURF’s Request for Proposals, the land will ideally become a mixed-use development with possible opportunities for open space and a housing component.

Million said building a pump-storage system with the stadium should not interfere with selling the remainder of the land. In fact, he also proposed CSU turn that land into a second Olympic training facility, possibly through a partnership with Elon Musk.

“The University reminds me of a horse with blinders on–they’ve set their plow and they’re headed to the end of the field, and they aren’t looking at what they should be looking at which is green energy,” Million said. “It’d be a damn shame if they lost this chance.”