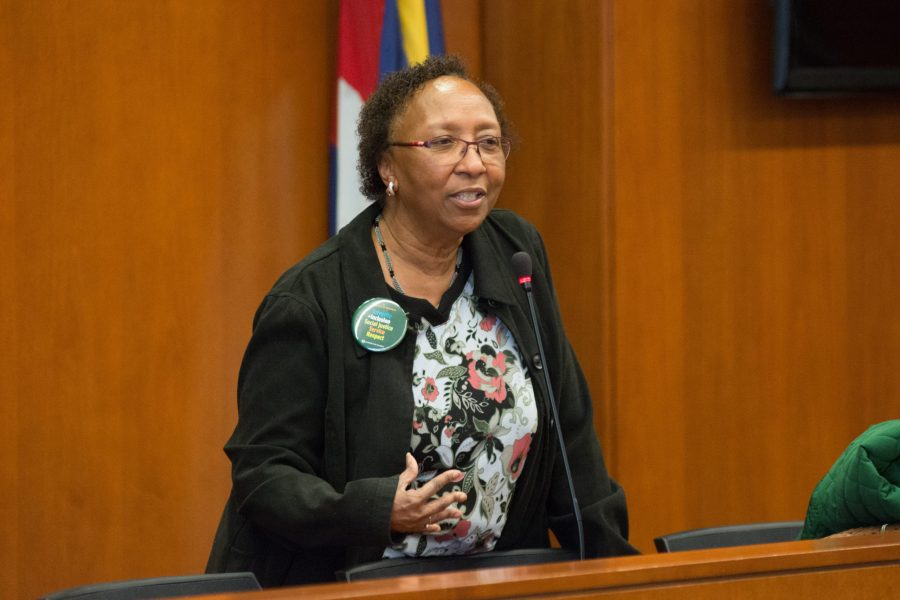 CSU’s Vice President for Student Affairs Blanche Hughes speaks at the ASCSU Women’s Caucus meeting on April 14 in the ASCSU Senate Chambers. Hughes spoke about her upbringing and position at the University, as well the experiences she has faced as a result of her identities. (Colin Shepherd | Collegian)

Dr. Blanche Hughes, vice president for Student Affairs at Colorado State University, delivered a speech Wednesday from 4-5 p.m. at the Lory Student Center Senate Chambers that was hosted by the Associated Students of CSU.

Hughes focused her speech on the experiences she had and the decisions she made in life that influenced and lead her to becoming the Vice President for Student Affairs at CSU, as well as the problems she has faced in relation to her identities, specifically as a woman of color

Hughes said that at the beginning of her career people would often explain to her how stressful student affairs positions were and how the workload didn’t leave much time for a family. This was especially discouraging since Hughes already had one child.

Hughes explains how she initially wanted to pursue a career in which she would work with children, saying that she admires how children can be open, honest and non-judgmental.

Instead, Hughes started taking up several different professional positions at CSU beginning as a graduate student, and she said these positions prepared her for the student affairs position she holds today.

Hughes said she was eventually inspired by a colleague to take a student affairs position.

“I had a mentor, an African American woman, who was the Associate Vice President here, and she used to tell me, ‘one day, you’re going to have my job,’” Hughes said. “And I said, ‘no way, I don’t want your job, you’re job’s too stressful,’ and she said ‘If none of us as women, as people of color or anyone of marginalized identities, are willing to take these leadership positions and be at the table when decisions are made that change the system for everybody, than change is never going to happen.’”

Hughes said that her job entails giving students chances and maintaining a positive attitude at all times, two aspects of her job that she learned through her upbringing in segregated Lexington, Kentucky.

As Vice President of Student Affairs, Hughes has experienced issues with people and even fellow coworkers in relation to her identities over the years, and during the question and answer segment of her speech, she gave students advice on how to push past these issues in the workplace.

Hughes explained that people should always try to understand other peoples’ backgrounds and life stories in order to understand their views.

“I don’t get angry a lot, and I will still try to have a conversation,” Hughes said. “If it was a safe environment, I’d love to talk to white supremacists. I want to know what happened to you. Help me to understand why you hate me when you don’t even know me.”

“Having confidence that you belong here, that you do have things to say, is a big thing,” Hughes said. “We as women need to look for allies among women and men.