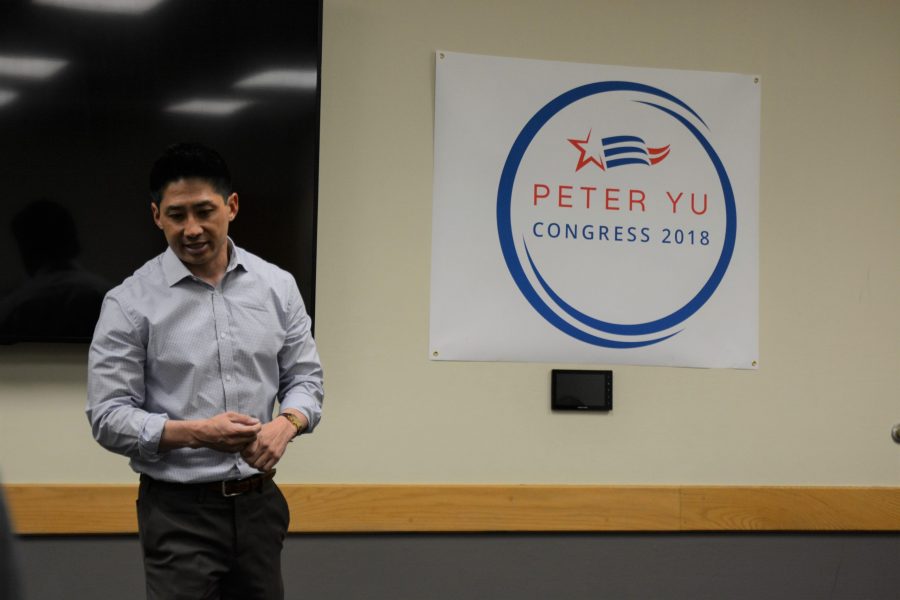 Colorado State University College Republicans hosted Peter Yu, running for Congress in 2018, as a speaker tonight. He talked about the upcoming campagin, his views on certain topics, and answered questions from the audience on April 10th.

The United States government has a spending problem and college-aged students will be the ones to pay for it, which was the main message Peter Yu hoped to impart to Colorado State University students at the College Republican meeting Tuesday night.

Yu also spoke about his plans to rein in spending and free speech as a platform for uniting people.

Yu said government spends too much and does so wastefully, with little accountability. That has created the growing $21 billion national debt which will severely harm on future generations, Yu said.

“It’s not about me,” Yu said. “It’s truly about making sure that people of your age–the people that will actually be affected who are in college right now–understand that we really do have to make sure we focus on the economy so that we don’t get it out of control.”

Yu said if he were to get elected, he would vote against every single bill with a spending increase and fight budget increases. He would also approve of a flat tax to pay off the debt, but acknowledges that it is unlikely to pass.

Yu said he would not make promises about providing universal healthcare or free education, because that would require additional taxes and too much spending, which he finds stagnating to the economy. He does believe, however, there are other solutions to make such services affordable.

Yu said free speech was important now more than ever in order for the country to come together, regardless of differing ideology, party or race.

“If we can’t come together, we’re always going to be apart,” Yu said. “Minorities are not victims, we are not two steps behind everyone else. You know who the true minority is? It’s the white single male because if (he) said anything or (he) said anything, they would call (him), probably, a white supremacist.”

Toki Hirakata, sophomore agriculture business major, asked Yu for advice on how conservative students could communicate their viewpoints effectively on a college campus.

Yu said the best way was to listen to the liberal perspective, respond to questions and also ask them in a straightforward way.

“When you get confrontational, you’re not going to get anywhere,” Yu said.

Hirakata said she found Yu very respectful to the different perspectives in the audience and found his advice really helpful.

“(What) he said really pushes people to have a conversation instead of everybody just yelling at each other,” Hirakata said.

For the 2016 election, Yu said he first supported Ted Cruz, and then Marco Rubio, and finally Donald Trump.

College Republicans president Veronica Morin said she appreciated how Yu was non-inflammatory about his viewpoints.

“He appeals to a lot of different demographics: to the young, middle and older,” Morin said. “He can really find good, solid ground for people to connect on.”

Although more Republican candidates could potentially come forward upto the primary in June, Morin said it was probably safe to say their organization would endorse Yu, though with a bit of wiggle room.

“We can’t concede to the same old, same old,” Yu said. “I have no doubt, come November, that I will win this race.”