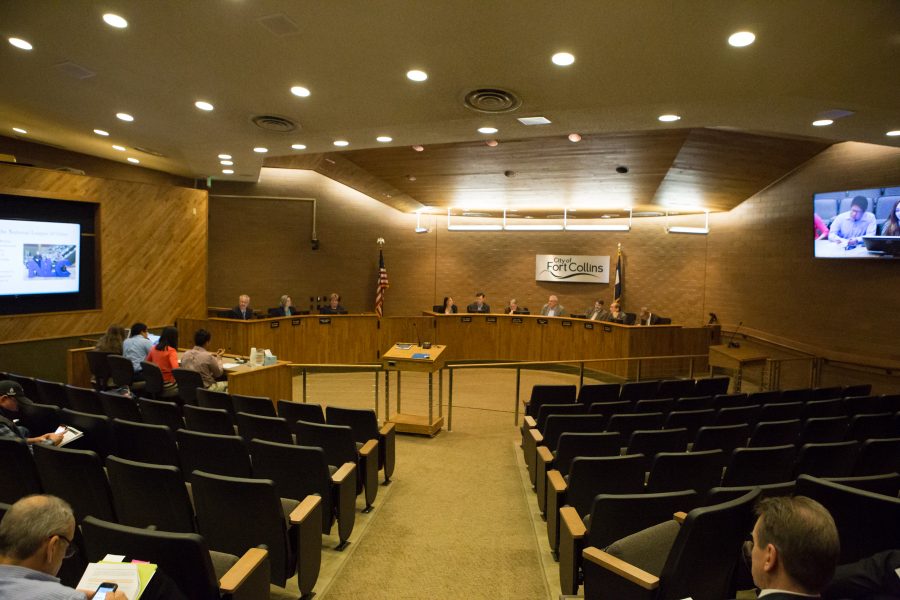 The Fort Collins city council met on Tuesday, April 17, 2018. During the meeting they discussed a measure to make the meetings move faster by requiring citizens to provide any materials that they wish to present atleast 2 hours early. (Josh Schroeder | Collegian)

Fort Collins city councilmembers reviewed a total of 13 consent items and three discussion items during last night’s city council meeting, but the discussion of the Poudre River Whitewater Park Project was the biggest item discussed during the meeting.

“It’s a privilege to meet with you again and speak with you about the Whitewater Park,” said Kurt Friesen, director of Park Planning and Development for the city of Fort Collins. “Tonight, we are requesting appropriation of approximately $1.5 million for the park project.”

During the meeting, Friesen delivered a ten-minute presentation, discussing the project in more detail and providing more information about the project’s budget.

As of now, the Poudre River Whitewater Park Project has about $9.2 million available in funding, Friesen said.

Approximately $4.2 million, or the bulk of the funding, comes from the Community Capital Improvement Project, with about $1 million coming from the natural areas, stormwater and fundraising sources each.

“Project design and permitting are nearing completion right now,” Friesen said. “We’re ready to move into the implementation phase very soon. Our goal is to begin construction this summer, and if all goes well, we’ll have the project complete by the summer of 2019.”

The Poudre River Whitewater Park Project will be located directly north of downtown Fort Collins, bordered by College Avenue to the west, Vine Drive to the north and the railroad to the east.

Councilmember Gerry Horak initially dismissed concerns of the Poudre River Whitewater Park Project diminishing the natural quality of the area, and said the area where the park will be is currently not in a natural state, and, if anything, the project will return the natural quality.

The biggest concern of all councilmembers was the absence of restrooms from the project plans.

“If we’re going to spend this much money, not to include restrooms doesn’t make any sense,” Horak said. “I’m very supportive of the project. It’s going to be, I believe, one of the unique things Fort Collins has and it’ll be a magnet for folks to go to, I think it’s going to be a huge success, but I sure would like to have a bathroom.”

“This is a significant effort as part of the overall health of the Poudre River, Troxell said. “I look at this particular project as enhancing our community and, more broadly, peoples’ understanding and appreciation of the Poudre River.”

The motion to appropriate $1.5 million in funds from the General Fund and the Fort Collins Urban Renewal Authority Fund into the Capital Project Fund for the Poudre River Whitewater Park Project, as well as the appropriation of funds from the Capital Project Funds into other programs and funds, was passed with the support of every councilmember except Councilmember Ross Cunniff.