A guide to CSU student fees 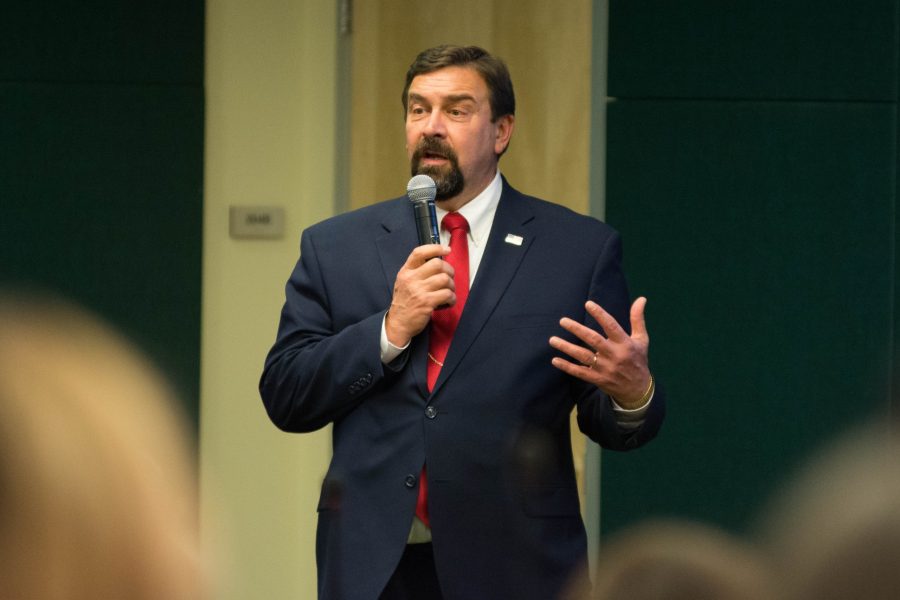 CSU President Tony Frank presents the Incremental Education in General Budget to the ASCSU Senate body on April 11. The budget reviewed a number of costs such as student fees and funding. (Colin Shepherd | Collegian)

Student fees add about $2,300 to the cost of attendance each year for students. And, this year, fees are expected to rise again.

Ahead of next week’s Student Fee Review Board presentation to CSU President Tony Frank, the process and structure of student fees will be a topic of importance in the coming months as the University finalizes its budget for the next fiscal year.

After SFRB presents, Frank will then take these suggestions to the Colorado Board of Governors. These recommendations will include a list of student fees for services and student organizations, as well as fees and increases that ensure the University’s compliance with local laws, like the recent increase in Colorado minimum wage.

Tony Frank came to the Associated Students of Colorado State University’s senate chambers to discuss budgetary issues with student government Wednesday night. During his presentation to the senate, Frank stressed the importance of student choice in the budget process.

“I’ve never taken a fee to the board that you didn’t recommend,” Frank said.

Every spring, 19 fee areas present a budget that incorporates the student fees, the revenues, the expenses and the funds, to the SFRB.

“It’s a one page document, and they have an hour to present about their fee area, they talk about revenues, expenses, depending on the area,” said Mike Lensky, former ASCSU Vice President and former chair of the SFRB.

With the recent election, Kevin Sullivan, ASCSU Vice President-elect will be recruiting a new SFRB to review fees that fall under ASCSU’s budget for the coming school year. However, for the time being, current Vice President Cole Wise presides over the SFRB, who will present to University President Tony Frank in mid-April.

“The Vice President-elect will put together an application with some questions and then send it out to all 19 fee directors of the 19 areas,” Wise said. “They will also help us to recruit, and so they’ll get the message out to the areas that they serve. It will be put up on our website, and then we’ll do a marketing push for members to be involved with this.”

When selecting a board that will make decisions about student fees handled through the ASCSU general fee, student government administrations said they are purposeful about their selection.

“Diversity of thought, in majors, in colleges, in activities they are involved in, in fee areas they have association with, it’s really kind of looking at how we can get the best representation of the student voice in this group,” Wise said.

There are a few key factors outlined in the ASCSU bylaws that help the SFRB decide what fee proposals have merit, including: if a fee is student-supported (meaning 10 registered student organizations support it), if there is sufficient student need for a fee and if the fee is sponsored by a university department.

Criteria fees need to meet: alignment to CSU land-grant mission; ability to effectively use the fee; service related to the organization’s purpose; adherence to the planned budget in the proposal; potential for direct student use; input from student constituents.-according to the ASCSU Bylaws
Accountability

In order to keep fee areas accountable for serving students, the SFRB also has the option to add fiscal notes stipulating certain requirements, though Lensky admits this system is not a perfect safeguard against misuse of a fee. Once a student fee has been approved for the first time, it is harder to follow up on if that same student fee should be renewed the following year based on if it was cost-efficient for the student body.

“There’s not an official process for us to say no (after adding fiscal notes),” Lensky said. “There’s not like a concrete no, like, ‘Oh, you didn’t do it, you can’t get anything.’ But usually, if a fee area doesn’t follow up on what they are doing we will usually not accommodate – like if athletics has to dip into a reserve and disregarded us, we would probably vote no on a fee increase.”

The SFRB can choose to review whether or not a fee is really serving students and choose to discontinue a student fee if it is not serving student needs. This was the case in the early 2000s with the Rocky Mountain Raptor Program, which was approved as a student fee by the SFRB, but then later removed. It was determined that too few students benefited from the service as it only trained limited students to handle raptors.

Beyond accountability after approval, different universities have different systems and philosophies when it comes to how a fee becomes a charge on a student’s account.

At University of Colorado in Boulder, for example, potential fees or increases are suggested by a large pool of students through individual votes. After that, fees are reviewed by the student government in a series of legislative hearings. Finally, approved budgets are taken from the Chief Financial Officer to the Board of Regents for approval before they are placed on students’ bills. Recently, however, the Chancellor at CU proposed a change to this process that would eliminate student review of fees within the process.

“The biggest thing that (this proposal) takes away is that students won’t have oversight on each of these budgets,” said Carter Gruba, President of External Affairs at Colorado University Student Government.

At Metropolitan State University in Denver, the process of approving student fees for programs is a smaller operation where two members from the student government and at least two students review and submit fees to the Provost. When it comes to larger fees such as the Health Center or the Regional Transportation District (RTD) bus fees, these are given a student referendum vote during elections.

President of the Student Government Assembly at MSU, Joshua Gardner, noted he was not aware of an easy way to review the merit of a fee after it had taken effect.

“We’ve never come across that issue in the time that I’ve been here, I’m sure there is a way (of reviewing a fee),” Gardner said.

While there are different philosophies about accountability for fees, and some universities even go so far as to offer an opt-out option, Lensky believes that although CSU’s system could be improved, student choice is still represented within it.

“You can really find a whole lot of ways that student fees could be better, but I’d also be really hard pressed to say truthfully the way we do it, compared to some other universities – not saying that the student fees is run badly – but the way that we review student fees I think is better,” Lensky said.

Collegian Digital Production Manager Mikaela Rodenbaugh can be reached at news@collegian.com or on Twitter @mikarodenbaugh.