Thornton pipeline to use water from Larimer County, land of resident 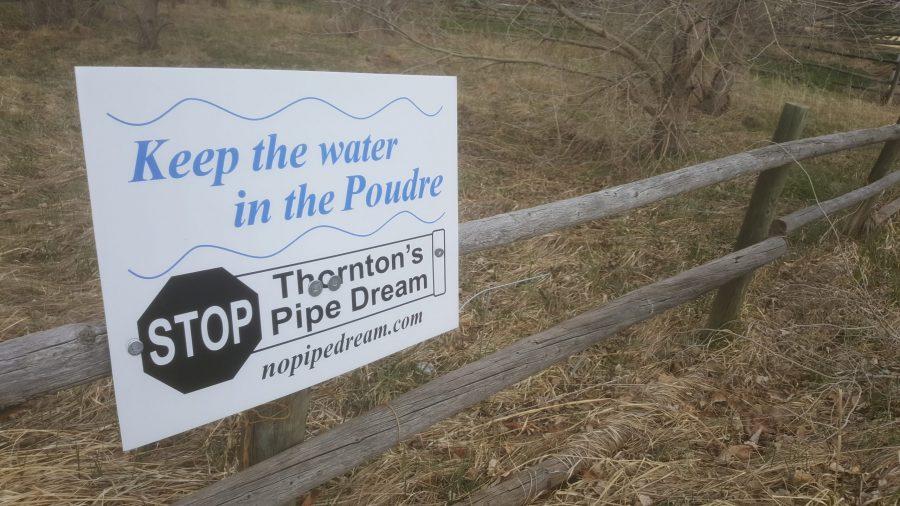 A No Pipe Dream sign is posted along Douglas Rd. where a portion of the pipeline is planned to run.

In the 1980s, the City of Thornton bought land and water rights located in Larimer County. Now, in the face of growth, they have to get that water to their city, but it will not be without opposition.

The Thornton Water Project involves the construction of a 48-inch wide, 70-mile long pipeline, running underground from northwestern Larimer County, east along Douglas Rd. and then south along Interstate 25 to its end-point above the city.

Mark Koleber, the Thornton Water Project Director, said the pipeline will be able to convey 40 million gallons per day, which will help supply summer water demand. Thornton plans to have the pipeline approved and built by 2025. This involves the construction of a pump station just below the reservoir to pull from. For this, the city needs to work with a private landowner.

“It pretty much takes the heart out of the whole situation cause that is where the trees were, that’s where they’d be,” Brauch said.

Brauch said Thornton is currently working to negotiate a deal with him. If nothing can be settled upon, Thornton will still be able to seize what they need using eminent domain.

“Every water utility in the state of Colorado has eminent domain power,” said Todd Barnes, communications director for the City of Thornton. “But, what we have been focused on for years now is making sure we come to agreements with landowners.”

Barnes said Thornton offers fair compensation on land they need to acquire and will pay for land appraisals so the landowner does not have to.

While Brauch understands Thornton needs his property, he said it is a helpless feeling to be told he is losing his land. Brauch also said although eminent domain should be for the public good, he and the people in Larimer County will not be the ones who benefit.

“What upsets me the most is that the people who stand to gain the most are the developers in Thornton who will now be able to build more lots and the city of Thornton which will gain a larger tax base,” Brauch said.

Representatives of No Pipe Dream, a Fort Collins-based organization comprised of around 500 members, recently spoke to the Larimer County Board of County Commissioners in an effort to influence a permit being issued to Thornton for the construction of the pipeline, said Warren Lemerich, one of the founders of No Pipe Dream.

“We are not disputing the water rights that Thornton owns legally. No one is,” Lemerich said. “What we are doing is asking Thornton to do the right thing and take the water from the (Poudre) River South of Fort Collins.”

The water Thornton will exercise their rights to was diverted from the Poudre River system over a hundred years ago, said John Stokes, Fort Collins Natural Areas Department director. This means the water level of the Poudre will likely see no change if the pipeline is implemented.

“The water right that they are currently developing to put in a pipe will not change the flow regime through Fort Collins,” Stokes said.

The water right that they are currently developing to put in a pipe will not change the flow regime through Fort Collins – John Stokes, Fort Collins Natural Areas Department Director

Lemerich said he is not convinced, as he still expects the pipeline to decrease the flow of the Poudre. However, this skepticism is not why Lemerich helped start No Pipe Dream. Lemerich said he views this water project as a way to actually increase flow to the Poudre River.

“If they did the right thing and chose to take the water out south of Fort Collins, in the Timnath-Windsor area, we would see that flow restored,” Lemerich said.

The water needs to go east, and using the Poudre to transport it instead of a pipeline would introduce water to the river that has historically been used for agriculture. Lemerich said this would have positive recreational and environmental impacts on a river whose health is diminishing.

Barnes said the city of Thornton purchased water rights north of Fort Collins for a reason.

“The City of Thornton picked this water source for the high quality of the water,” Barnes said. “If we were to leave it in the Poudre and take it out farther down the Poudre, it goes past several wastewater treatment plants and industrial runoff areas and municipal runoff areas. The quality of the water is degraded to the point that it no longer has the value it has now.”

More recently, lapses in communication have come about in Thornton’s permitting process.  No Pipe Dream member Lynn Nichols said she was alarmed to find two additional pipelines planned in a document obtained through an open records request.

“With the City of Thornton, we’ve discovered papers and court cases that show that it is not just a one phase project it is a three-phase project,” Nichols said.

The development of additional pipelines, however, is not likely to happen anytime soon, if at all. Koleber said the single pipeline currently being planned will suit the city of Thornton’s needs until 2065. Beyond that, Thornton is not sure if they will need to exercise additional water rights and further pull from Larimer County.

However, further water diversion by Thornton is possible. Koleber said Thornton has what are known as conditional water rights. These are not as definite as Thornton’s current rights and could fluctuate from year to year depending on water availability. Yet, they do mean Thornton could look to Larimer County again if faced with a water shortage.

Water projects like these, which draw controversy from private landowners and organizations like No Pipe Dream, are nothing new to Colorado.

“People don’t know that the big cities have water pipelines that travel great distances,” Barnes said. “They all have major pipelines that bring water to them. This project is not something new to the state at all.”

Collegian reporter Ty Betts can be reached at news@collegian.com or on Twitter @tybetts9.