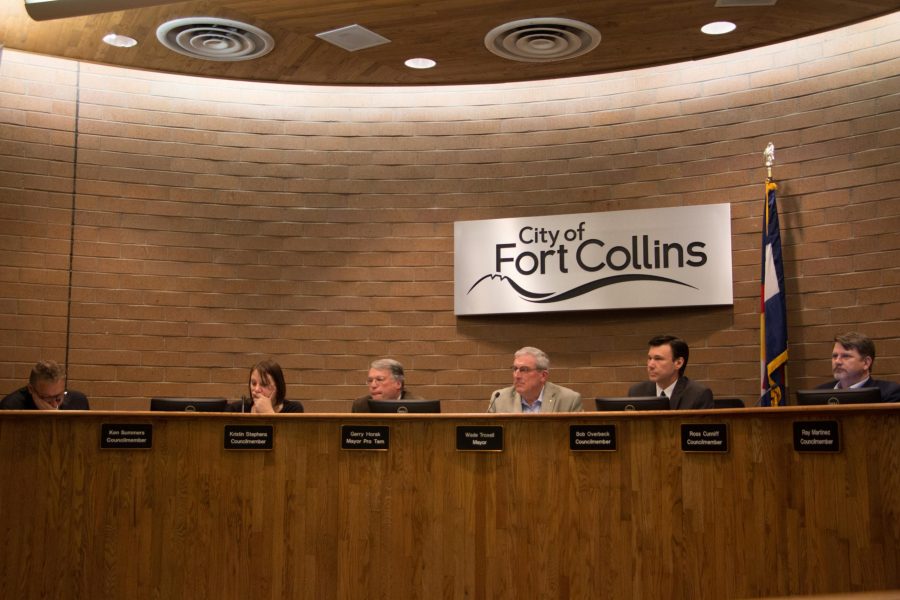 Members of Fort Collins City Council Tuesday night during weekly meeting. The council discussed Item Six on the agenda which is the proposed constuction on the interchange between East Prospect Road and I25 (Erica Giesenhagen | Collegian).

During last night’s city council meeting, Fort Collins city councilmembers focused on 15 different consent and discussion items, but Ordinance No. 047, 2018, which includes planned improvements to Prospect Road, was the most widely argued item of the night.

The appropriation of the $600,000 means the design process for the project can be initiated, and an additional one percent of appropriated funds, or $6,000, would go towards the Cultural Services and Facilities Fund for Art in Public Places.

“What we want to do is get in there with designs so we can coordinate with CDOT on that project with the intent to finish construction before or at the same time as CDOT finishes construction of the I-25 and Prospect Interchange,” Crager said.

In this project, East Prospect Road would be reconstructed as a four-lane roadway from Sharp Point Drive to Interstate 25 western frontage road.

Councilmembers requested Crager delve into the planning process of the improvements, but Crager and the councilmembers had some misunderstandings along the way.

When Cunniff asked Crager to clarify specific planning dates and to explain why the project did not go through a prior budgeting process, Crager initially did not give Cunniff the answer he was looking for.

“Maybe I’m not asking clearly, let me ask it a different way,” Cunniff said. “When did we know that we wanted to enter into this partnership with CDOT and the other local governments?”

Crager said the general discussions were coordinated with the Colorado Department of Transportation last fall, and that CDOT signed a contract with its contractor this year. He also said he wanted to wait until the contract was finalized before planning these changes and improvements.

Several of the councilmembers ultimately seemed to be unfamiliar with the project, and they wanted to clear up these details before appropriating the funds for the project.

“I think the process could’ve been a little better in this case, however, I have driven on Prospect Road during rush hour, so I will be supporting this motion because I would like to see some movement on that,” Councilmember Kristin Stephens said.