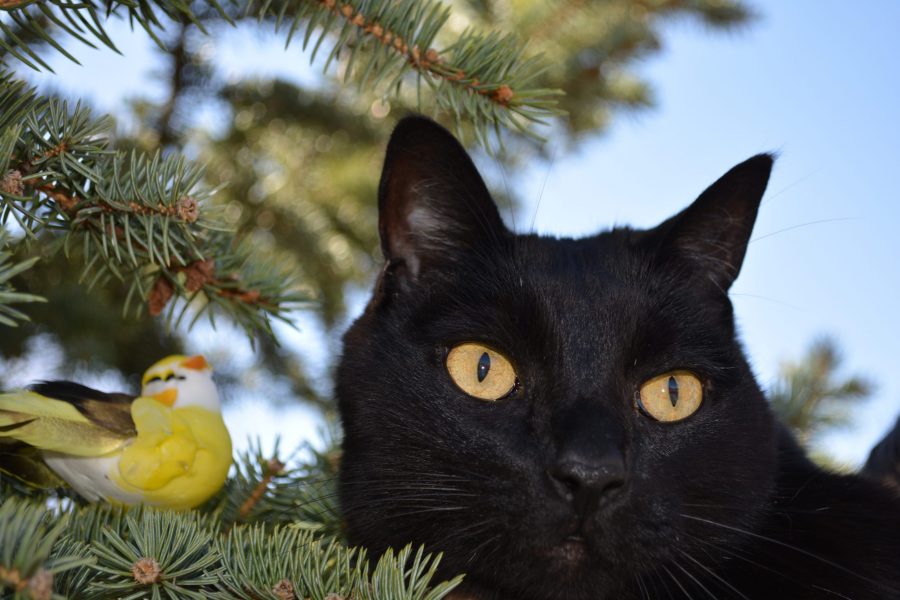 (Photo illustration by Zoe Jennings) Outdoor cats, kill about 1.3 to 4 billion birds in the United States annually. Fort Collins bird populations are especially vulnerable to outdoor cat predation because the city falls on a major migration corridor for birds, there are many pets and there is the presence of a big university in the town.

Mariah Worman adopted her beloved cat, James, when she was 11 years old. Ever since, he has enjoyed life living inside their home as well as exploring their suburban neighborhood.

Little does James know that he, along with other outdoor cats, kill about 1.3 to 4 billion birds in the United States annually, according to a study conducted by Peter Marra, a lead researcher in avian conservation science. Fort Collins bird populations are especially vulnerable to outdoor cat predation.

“All the elements are there: lots of pets, lots of people, lots of birds,” said David Koons, the James C. Kennedy Endowed Chair of Wetland and Waterfowl Conservation at Colorado State University. “The element for this being higher than the national average impact of cats on birds is all there.”

The city falls on a major migration corridor for birds, there are also many pets and a big university in the town. These are all factors for increased wild bird predation by outdoor cats, Koons said.

James is about 18 pounds and is a “predator in every way,” Worman said. He has fought an owl and even caught a small raccoon.

“He’s totally fearless,” Worman said. “He scares most dogs. I can’t even tell you the amount of times I have walked out to my front porch and seen a little mouse or a little bird. He’s always been a hunter.”

For Worman and others, allowing pet cats to live outdoors was a value picked up during a time when the U.S. was less urbanized.

“It was really important to my dad,” Worman said. “He grew up in the mountains, so he thinks it’s absolutely inhumane to not have animals be outside a lot of the time. They were always outside.”

As few as 40 to 50 years ago, habitat loss was almost a non-issue, Koons said. Now, with the increase in lands converted for agriculture and urban areas, new habitats for birds are often private yards and parks located in urban and suburban environments.

“If we want to keep birds around, those will be surprisingly some critical refuge habitats, but we need to make sure that they don’t die in those habitats,” Koons said. “In the near future, figuring out how to make our yards and our parks safer for wildlife will be an important issue.”

Jesika Feldman volunteers at the Greenwood Wildlife Rehabilitation Center in Longmont. She observes birds that are admitted to the center due to cat attacks.

For cats, hunting birds goes beyond an instinct to eat; they also bring the prey back home still alive, Feldman said. Birds that end up at the center often get attacked from the back and sustain tail feather injuries, which takes a substantial amount of recovery time.

Leading scientists like Marra also point out the major other culprit for bird population predation is feral cats. Some proposed solutions for dealing with the feral cat population have produced fiery debate between stakeholders. Some veterinary scientists as well as animal rights activists argue that spaying and neutering and then releasing back into the wild is the best way to deal with the population. However, this ignores a major issue in conserving bird populations.

Outdoor cats kill about 1.3 to 4 billion birds in the United States annually

“The reason that campuses are unfortunately a source for feral cats is that a lot of students get their pet, and then they move on and moving’s a challenge so they just leave their pets,” Koons said.

Some other solutions lie in phasing out feral colony feeding programs and figuring out how to not monetarily support the populations and make the environment less amenable to them, Koons said.

Arguably, an easier task is for cat owners to bring their outdoor cats indoors.

When Worman’s other cat, Roxy, was hit by a car she attempted to put James inside for his safety.

We are always thinking of ways to be more green. One easy way to make less of an impact is to keep your cat inside.” -Jesika Feldman, volunteer at the Greenwood Wildlife Rehabilitation Center

“Along with losing his cat partner, his mood changed,” Worman said. “He stopped eating, which is unheard of for him. He was not as playful, not as cuddly. He just became more irritable and he could tell he had the entire neighborhood, and all of a sudden he just had a house and his freedom was taken away, I think.”

Feldman suggests implementing small practices that will allow cats to experience the outdoors without threatening wildlife, including granting the cat supervised time outside, giving them cat grass, opening the windows and stimulating them.

“There are ways to do it, you just have to have a little patience with your cat, especially because they are going to be angry,” Feldman said. “But it’s best for your cat and it’s best for other animals.”

In Fort Collins, cats are at a greater risk than other urban areas. There is a lot of wildlife, such as coyotes, squirrels and mountain lions, that still inhabit suburban areas.

“We do live in such an area where wildlife is so much more a part of where we live that the chances of those encounters probably are a lot higher here than somewhere like a big city,” Feldman said. “But also we are suburban. There’s still lots of cars. It’s definitely a big impact here.”

For those involved with wildlife populations, such as scientists and birders, keeping cats indoors may seem like a no-brainer, but for the general public, some don’t realize that cats are not natural to their outdoor environment.

“That’s never been a thing I’ve been made aware of,” Worman said. “I think for me it always seems like we have such a big population of birds that it didn’t seem like that much of an issue.”

Although campuses can often be the breeding ground of feral cat populations that will eventually hunt wildlife, Koons has hope that it will be a place where education can start.

As more awareness about outdoor cat populations spreads, ways to deal with outdoor cats can determine the impact they have on the environment.

“We are always thinking of ways to be more green,” Feldman said. “One easy way to make less of an impact is to keep your cat inside.”

Collegian reporter Zoe Jennings can be reached at news@collegian.com or on Twitter @zoe_jennings4.