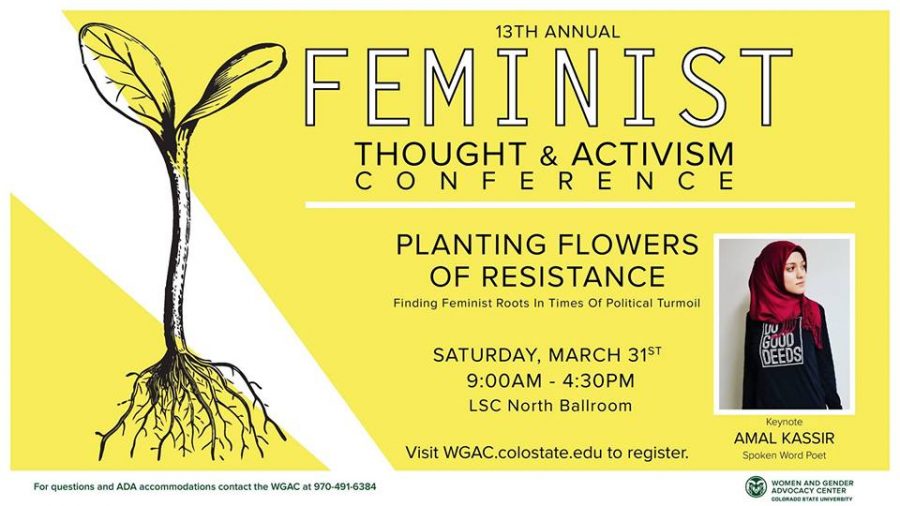 A safe space for students to converse about topics such as social justice is one of the hopes of the Colorado State University’s Women and Gender Advocacy Center this Saturday.

The WGAC is hosting the Feminist Thought and Activism Conference, Planting the Flowers of Resistance, with keynote speaker Amal Kassir, starting at 9 a.m. and running all day in the North Ballroom of the Lory Student Center.

The Women and Gender Advocacy Center will host the Feminist Thought and Activism Conference Saturday, March 31 at 9 a.m. in the CSU North Ballroom.

There will be several workshop sessions where conversations concerning topics such as gender justice, religion and feminism will be held. Those in attendance are able to choose which sessions they would like to attend. Lunch and child care will be provided and is guaranteed through online registration.

“The idea of planting more seeds of resistance is acknowledging the difficult heightened political climate we are in,” said Angelica Murray, program coordinator at WGAC. “We want the conference to be a place where you can come to be refueled, get some ideas, get some motivation, be in community with folks.”

The conference has been held annually since 2005, but this is the first year it is called the Feminist Thought and Activism Conference, rather than the Women’s Conference.

“We assess how we are feeling, what we are observing, what are we hearing around on campus, in the world, in our current social context,” Murray said. “The students said they feel a kind of need (for discussion) and are experiencing a renewal in a way. They’re renewing and replenishing a sense of purpose and a sense of commitment, which in a lot of ways is showing up as activism, social activism.”

Kassir, the keynote speaker, is a 20-year-old Syrian-American Activist. According to her website, she is a Denver native, but has performed in 10 countries and over 45 cities. She will also be speaking at Front Range Community College on March 29.

Last year, the conference was titled Speaking Out, Breaking Out, and Redefining, with Jessica Chavez Salazar, Lawyer for the Colorado Attorney General, and had a great turn out, Murray said. This year they hope for the same.

Murray encourages students to go onto the WGAC website if they want to get more involved or are interested at all about the conference.

“We aren’t checking people’s ‘feminist card’ at the door, it’s a space to center around topics of that,” Murray said. “We know the process is about being in space, conversation, and community with people to talk about conversations, even if you aren’t a feminist.”