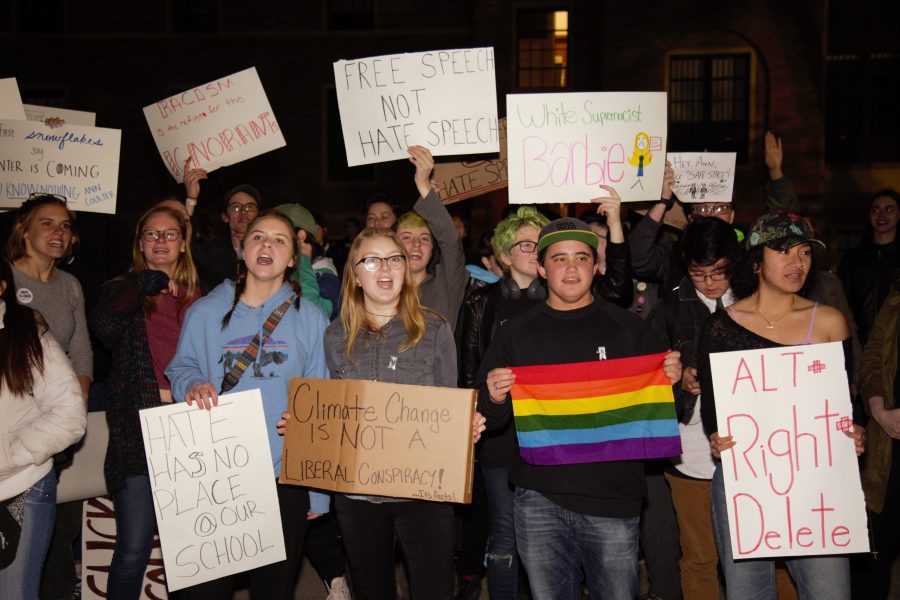 BOULDER – In fear, in anger and in hope for change on campus, students outside a University of Colorado chemistry building protested the presence of a conservative speaker on campus Wednesday night, while others supported her speech inside.

About 500 students gathered to either listen or leave the talk by Ann Coulter, a popular and well-known right-wing political commentator. About 20 minutes into her speech, between 75-100 students walked out in protest.

Though CU’s administration and police force heavily prepared for the event, including by scouting Coulter’s previous event in California, the protesters and Coulter supporters only interacted for a few brief moments after the event let out, and the two groups did not become violent. Though tense, the crowd quickly de-escalated when the main group of protesters moved to a different location on campus.

Students said they came to protest Coulter’s speech because her rhetoric is racist and hurts marginalized groups.

“We’re here to symbolize that free speech does not equal hate speech,” said Percy Suchanek, a freshman CU student protester. “Ann Coulter just spreads hate speech and we don’t feel safe having her on our campus.”

I think any critically thinking person who listens to her rhetoric would see that it’s not only absurdly racist, but also she’s basically parroting the minds of whatever the Trump administration is spouting at that point,” -Larson Ross, a senior political science CSU student and YDSA Member.

“I think any critically thinking person who listens to her rhetoric would see that it’s not only absurdly racist, but also she’s basically parroting the minds of whatever the Trump administration is spouting at that point,” said Larson Ross, a senior political science CSU student and YDSA Member. “She is vehemently anti-feminist. All of these things really undermine any point she could possibly make.”

The walkout was organized by The Collective, a new CU student group on campus focused on changing campus climate around racism, the Muslim Student Association, and other campus groups.

And even though most of us have heard enough from this lady, we decided to sit through half an hour of her talk before quietly leaving. Many others were interested and so we came up with a simple plan. Not everyone was able to obtain tickets so they opted to protest outside.

The group chose to stage a walkout in order to perform a protest that was safe and non-disruptive, said Berkeley Mccarthy, one organizer with The Collective. Mccarthy was disappointed in CU’s handling of the event, but said Turning Point USA had a right to host a speaker.

“Not as much money or security was put towards speakers like Laverne Cox,” Mccarthy said. “There was way more security here (for Ann Coulter), way more money spent and more care, honestly, than for any other liberal speakers.”

CU provided external security for the event, while Turning Point USA provided funding for the speaker fees and for internal security, CU chief spokesperson Ryan Huff wrote in a statement to the Collegian. The total cost of the event to the University will not be released for several weeks until the bills are tallied, Huff wrote.

Students who attended the event praised CU for allowing Coulter to speak.

“Boulder is a very leftist school, so I think by hosting her, and not shutting it down, (that) was a big step forward for free speech,” said Alexander Adams, a CSU sophomore economics student who traveled from Fort Collins to attend the event.

In the event, Coulter spoke about immigration and the dangers of liberal ideology.

“The modern definition for a racist is a conservative winning an argument with a liberal,” Coulter said in response to a student’s question about being conservative in a liberal space.

Turning Point USA members said the event was a success, and they were happy with how CU handled the speech.

Boulder is a very leftist school, so I think by hosting her, and not shutting it down, (that) was a big step forward for free speech,” -Alexander Adams, a CSU sophomore economics student who traveled from Fort Collins to attend the event.

“I think we had a really good turnout everybody responded really well other than the protesters,” said Sierra Oklesson, a CU student and Turning Point USA member. “(I think it’s important) to get the other perspective because at CU we have none of (the conservative perspective). We don’t have anybody.”

Though many conservative students said the event was a win for free speech and for bringing new ideas into a liberal space, liberal students said Coulter’s presence was more harmful than a first amendment demonstration.

“To the wealthy and privileged strata of Boulder, of which there are a lot, Ann Coulter’s ideas are not a threat,” said Jonathan Flowers, the co-chair of CU’s YDSA chapter. “I think that’s why they see this as an exercise in free speech, but there are many unprivileged people in Boulder and in Colorado who will be directly affected by the ideas that she’s propagating.”

However, many student protesters said by allowing Coulter to speak and providing resources for her to do so, CU’s allowance bordered on an endorsement. This struck a chord with students who feel as though the university is already not supporting marginalized groups.

“I think more than anything, the reoccurring events on this campus affirm that students like myself are not welcomed,” said Magdalena Landa-Posas, a senior ethnic studies CU student, in reference to the university spending resources on events like Coulter’s. “Regardless of the money I spent on this school, it will still be spent against me.”