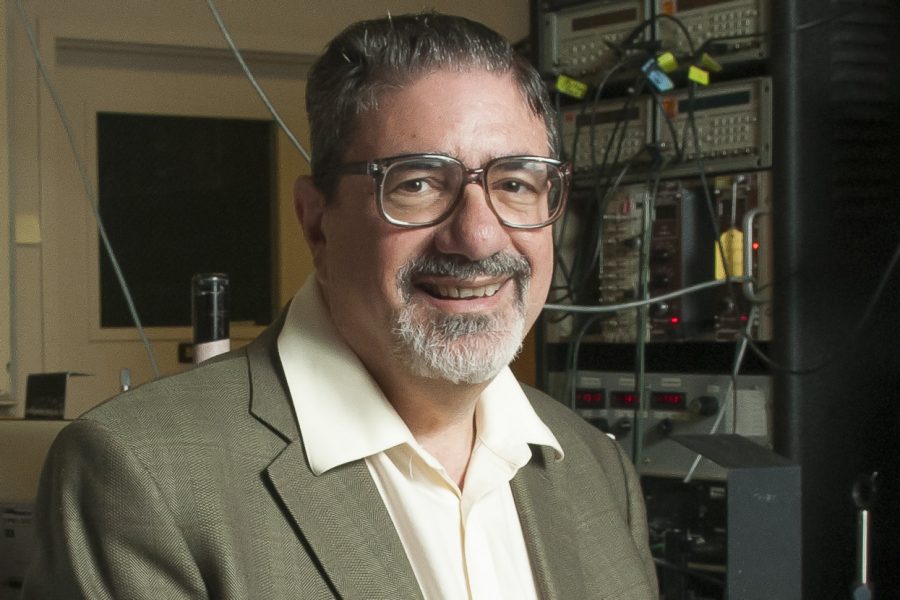 Richard Zare, the Marguerite Blake Wilbur Professor in Natural Science at Stanford University, will be giving a talk on microdroplet chemistry on Wednesday, March 7 at 4:00 pm. Zare is highly distinguished in the scientific community, holding a Presidential Award for Excellence in science, mathematics, and engineering mentoring among other recognition he's received. (Photo courtesy of Richard Zare)

Water can be considered a universal catalyst and previous research determined water is a universal solvent.

However, Professor Richard N. Zare of the Department of Chemistry at Stanford University unknowingly stumbled upon a new use for water. Zare spoke on his research of reactions in microdroplet chemistry at the Hach lecture on March 7.

“If you add acid, you denature the protein,” Zare said. “As it unfolds it picks up more places where you can put H+, so it will be more charged.”

In his experiment, Zare saw that when cytochrome c fused with acid, it shot forward within the mass spectrometer, which deflects ionized atoms and molecules by way of magnetic fields. This resulted in differing pH levels.

Zare’s idea was to use the mass spectrometer with liquid droplets and cytochrome c to measure the distance they covered.

“How do we measure this distance?” Zare said. “Seriously, we use a ruler. We measure in millimeters.”

Zare then looked strictly at the distance covered between one and five millimeters. He then calculated the time based on the distance and velocity.

Zare said he determined that the very quick reaction time was not influenced by evaporation, as the results showed little difference due to temperature.

“I know by changing the heating … that it’s not going to cause any chemical reaction,” Zare said.

In a kinetics test, Zare used the redox reaction that occurs when dicholophenolindophenol (DCIP) and ascorbic acid used to measure his reaction rates. Using DCIP acid with 100 times the concentration of ascorbic acid, Zare said he noticed that, in droplet form, the reaction was significantly faster than in bulk form.

In addition, Zare’s reaction using water was “about three orders of magnitude higher than the rate in bulk.” Zare said he set up another experiment using cytochrome c and neutral water. He then shot the fused particles into the mass spectrometer and noticed something incredible – the water droplets were acting as a catalyst.

“The reaction rate in the droplets has been accelerated by a factor of a million or more,” Zare said.

The reaction rate in the droplets has been accelerated by a factor of a million or more,” -Richard Zare

Using this new information, Zare said he decided to look into gold formation in microdroplets. When using water microdroplets, the rate and size of the gold increased by a factor of 2x when compared to those used with bulk solution.

Zare’s research has shown that aerosols and microdroplets have the capability to provide an environment for which reactions can increase in speed and yield, showing that water can be used as a catalyst.

“This is pretty exciting in a way,” Zare said. “By and large, the world we live in is using chloryphyll with photosynthesis… to make things that plants use to live. Here is a mechanism in water that doesn’t require sunlight, necessarily.”