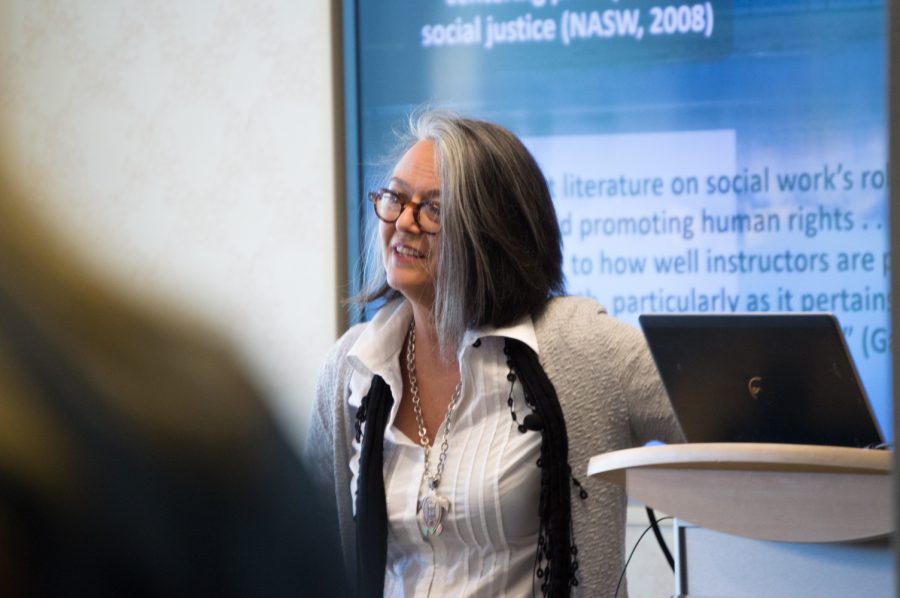 Roe Bubar, J.D., a professor of Ethnic Studies, gave a presentation about microaggressions towards indigenous peoples in education Monday afternoon in the LSC. She emphasized examples of the logic of elimination, a theory which seeks to destroy and replace, among instituationalized education. (Photo by Olive Ancell | The Collegian).

Microaggressions can inhibit academic success, which explains social work’s growing interest in the treatment of students and faculty of color in the academic setting; Dr. Roe Bubar, ethnic studies professor at Colorado State University, discussed as much at the kickoff event for Social Work Month.

The event, hosted by the School of Social Work, took place Monday, March 5 from 12 to 2 p.m. in the Lory Student Center and discussed the impacts of microaggressions in higher education on indigenous students and faculty.

Microaggressions are brief, commonplace comments or actions which suggest hostile or derogatory attitudes toward a marginalized group, according to Merriam-Webster.

Burbar talked about the negative impact of stereotyped images of Native Americans, particularly in sports mascots such as the Loveland High School Indians.

“When indigenous students and adolescents see images of mascots as well as other demeaning ways in which indigenity is portrayed, it impacts self-esteem, it impacts educational attainment rates,” Bubar said. “That seems really wild to say, but we have studies that actually suggest that’s the case.”

Even CSU is far from immune to these issues. Bubar pointed to the “Cowboy vs. Indians” incident from 2010, where in a Facebook post, a CSU basketball fan asked students to wear American Indian clothes to a game against the Wyoming Cowboys.

Native students who raised concerns over this suggestion were met with escalating hostility, especially the women, Bubar said.

“We’re not the Indians; we’re the Rams,” Bubar said. “It’s really interesting to see how the student body can take up this new trope … that (is) really remnant of settler colonialism.”

Settler colonialism is defined by writer and historian Patrick Wolfe as a sociopolitical structure meant to destroy the indigenous people in order to replace them with colonizer’s culture, population and ideology.

Bubar said all these issues are particularly important for native students, who as a group have some of the lowest achievement scores and high school graduation rates in the country, according to U.S. News.

“I think the ways in which children, adolescents, college students get positioned in education is a particular sight of microaggression and racialized ways in which settler colonialism comes back into the classroom and into our lives,” Bubar said.

After the lecture, ethnic studies graduate student, Erica Lafehr said although the lecture information was not particularly new to her, she still thought it was interesting from an interdisciplinary standpoint.

“It was really interesting to see they way social work students are processing this kind of information,” Lafehr said. “The thing that’s really interesting about a lot of the questions that were asked (after the lecture) is that they’re all … institutional and outward. To me it seemed people weren’t connecting with … the part of her talk where a lot of this is actually the self too.”

“It’s a really important topic to be talking about, particularly at a land grant university, and it’s something that we don’t talk about very often,” Gustafson said “Dr. Bubar was really clear in saying how settler colonialism comes up in every part of our lives and it’s time to evaluate the ways that that shows up in your own life and in the classrooms we’re at at CSU.”