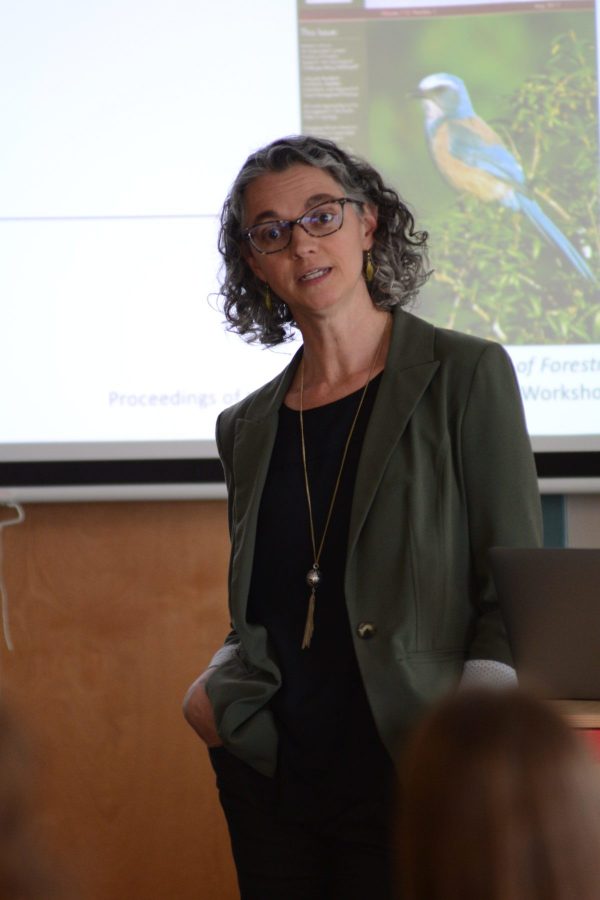 Dr. Linda Nagel, Professor and Department Head for the Forest and Rangeland Stewardship programs, speaks about her experiment on Manager-Scientist Partnerships to Apply a Climate Adaptation Framework. Nagel's experiment showed the importance of correctly understanding a forest's current and possible future situations and how an in the field scientist can help in the management of implementing different treatment styles such as resistance, resilience, and transition. Nagel's seminar is part of the NREL/ESS Spring 2018 Departmental Seminar Series held every Wednesday at 3 pm in room A302 of the Natural and Environmental Sciences Building (NESB). (Matt Tackett | Collegian)

The Natural Resource Ecology Laboratory and the Department of Ecosystem Science and Sustainability seminar series continued Wednesday afternoon in the Natural and Environmental Sciences Building with Linda Nagel.

Nagel gave a lecture entitled  “A National Experiment in Manager-Scientist Partnerships to Apply a Climate Adaptation Framework” to a room of students and faculty interested in ecosystem science and sustainability. A few of the students present, such as Courtney Peterson, were also involved in the project Nagel presented.

Nagel’s focus was on a climate change module targeted at forests from both a management and scientific standpoint. The official project is known as the Adaptive Silviculture for Climate Change (ASCC) and specifically looks to compile research in order to find effective ways to prepare forest ecosystems to deal with climate change.

“What actions can we take to enhance the ability of a system to cope with change and to meet goals and objectives?” Nagel asked.

Nagel said that forest management consists of understanding what is in the current ecosystem and the likely changes over time. This then allows researchers to describe the desired future condition.

Nagel said there are three main approaches in this area: resistance, resilience and transition or response.

“We can put them along a spectrum,” Nagel said near the beginning of her lecture. “For resistance, we’re really trying to keep what’s there. We’re trying for a lack of change or for no change. As you work down the spectrum, in transition, we’re actively working for a change.”

Nagel’s primary focus for the presentation was on the work done in the Chippewa National Forest. Nagel said the current climate there is suggested to change a lot in 90-100 years. The winters are likely to become more like Chicago’s climate and the summers are predicted to change to Kansas’.

“Minnesota is a place where there is projected to be a lot of changes in species’ habitat suitability,” Nagel said of the site. “So we dug into the model and we looked at the national forest levels and looked at the best and worst case scenarios and tried to identify the species that were either winners or losers.”

At the end of her presentation, Nagel emphasized this project as an example of adaptive management for forests and as a manger-scientist partnership. She also spoke of the long-term side of this.

“We’re setting something up that we hope will be utilized well into the future,” Nagel said.

We’re setting something up that we hope will be utilized well into the future.” Dr. Linda Nagel, professor and Department Head for the Forest and Rangeland Stewardship programs

Nagel also took time to speak about what she found interesting in the project.

“There’s a treatment at each of the sites that makes people uncomfortable,” Nagel said. “It pushes the envelope for them in their thinking and lets us test these things on the ground and move from them.”

The next NREL/ESS seminar will be on April 11.

Collegian news reporter Charlotte Lang can be reached at news@collegian.com or on Twitter @ChartrickWrites.