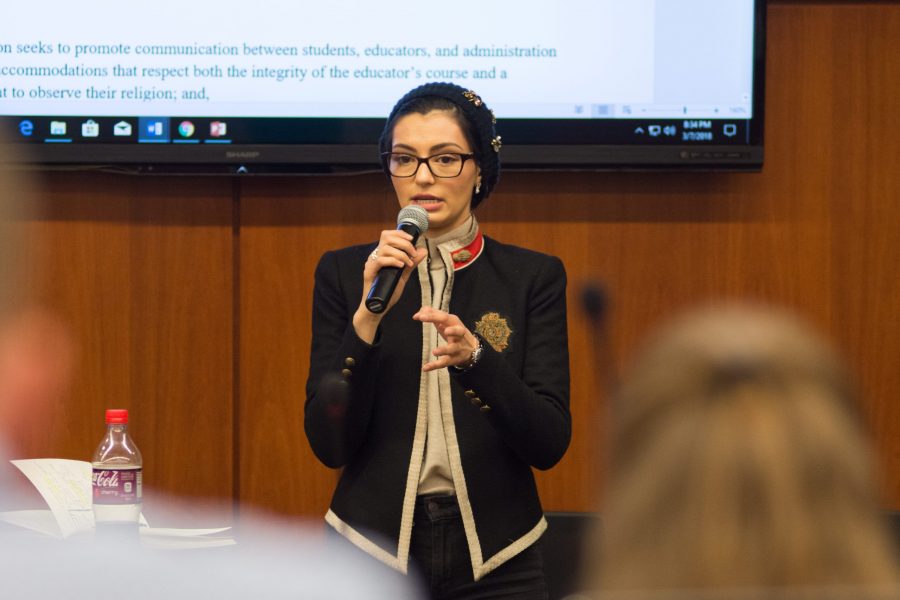 In the wake of discussions of internal bias, empowerment and representation dominated the discussions of the Associated Students of Colorado State University Senate session on March 7.

ASCSU discussed two bills aimed at encouraging visibility for underrepresented communities: the first would establish the Women’s Caucus as an inter-branch standing committee, and the second resolution encourages communication with regard to absences for religious holidays that are not formally excused by the University.

Both bills were written and presented by Senator Merall Sherif, who explained in an interview with the Collegian her personal intersectional experiences as a Muslim woman greatly influenced her motivation to bring forth the legislation.

“I’m Muslim, so I wear a hijab, I wear a headcovering. I used to wear a scarf typically, but now I wear beanies … and I’ve noticed that this year, since I am less visibly Muslim, I have added eight lines to my resume,” Sherif said. “The opportunities have come, and that’s an unfortunate reality, but I want to empower other people to feel that they don’t need to have other people speak for them, that they can be their most authentic self.”

The Women’s Caucus proposed as a formal standing committee

A bill proposing ASCSU formally establish the ASCSU Women’s Caucus as a standing committee, which would aim to empower women in the organization by gaining a wider female voice in ASCSU, came before the Senate Wednesday night.

As a formal committee, the Women’s Caucus would be comprised of all female students in ASCSU from the legislative, executive and judicial branches, as well as the Ram Leadership Team, Board for Student Organization Funding and the Student Fee Review Board on the basis of voluntary membership.

Sherif explained the Women’s Caucus itself arose out of her concern that other woman-identifying Senators felt their voices held less weight in the body.

The Q&A session invoked questions expressing concern that the Caucus is discriminatory or limiting in its focus on women from concerned Senators and members of the Gallery, such as Ethan Burshek, junior sociology major and member of the Young Americans for Liberty.

“It seems to me that there may be a multitude of other identities that might also face those problems,” Burshek said. “Why not call it something else like the leadership caucus or the speaker’s caucus, just to further specify and be more specific and intentional with what the purpose is and not be confused with labels?”

Isabel Brown, speaker of the senate, said there is precedence for past committees representing particular identities, and encouraged anyone to form such organizations. Sherif explained the Caucus aims to work within a proactive framework of empowerment rather than division.

“It’s not meant to be divisive, it’s not an ‘us vs. them,’” Sherif said. “We have a lot of respect for all of our male colleagues, but the goal for this is to empower the women in the body to be able to voice concerns and passions … and to catalyze collaboration.”

Senator Sherif also introduced a resolution that urges the University to recommend the inclusion of the standing University policy for religious exemptions be included in all syllabi.

“Religious exemption policy is something I’m working on through the President’s Committee for Diversity and Inclusion,” Sherif said in an interview with the Collegian. “It’s really about creating faith-based communication between professors and students and leveling the playing field for everyone to make them feel like that isn’t that difficult of a conversation to have. We laid the groundwork, and we hope that it facilitates some more positive interactions.”

Sherif said although a pre-existing framework for seeking religious exemption exists, the current process can be impersonal and ineffective for students who celebrate minority holidays. In drafting the resolution, she drew on her personal experiences and those of her constituents.

“People who observe non-majority holidays should be allowed the opportunity to observe their holidays just as much as anyone else,” Sherif said.

In a follow-up interview with the Collegian, Sherif explained the importance of students to be empowered to feel comfortable and represented as their most authentic selves, both in the classroom and in the broader community.

“We will value their identity and their representation and their input exactly how they are, so they don’t have to do it like I did,” Sherif said.