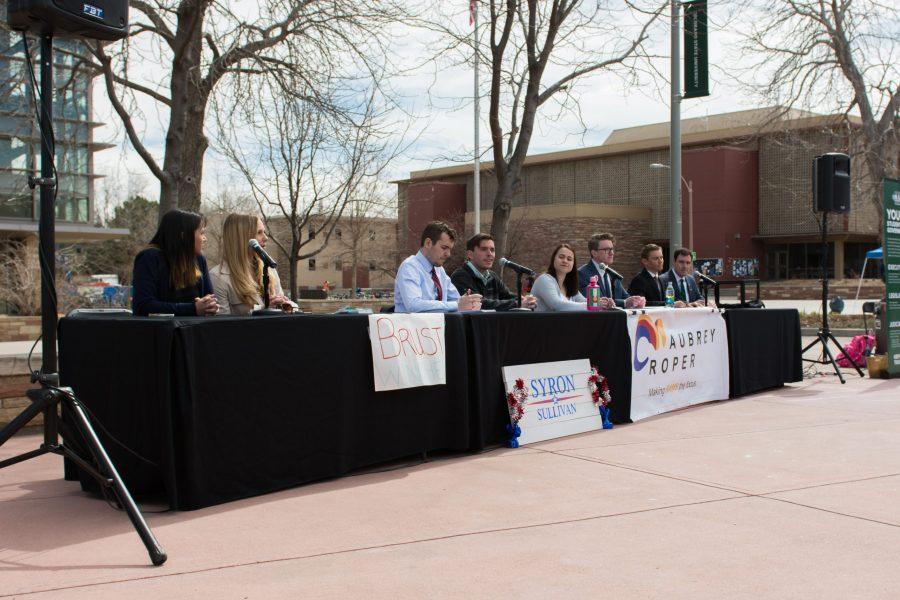 ASCSU presidential and vice presidential candidates participate in the ASCSU Plaza Debate outside of the Lory Student Center on March 21, 2018. (Colin Shepherd | Collegian)

As students walked through the Plaza Wednesday afternoon, the four presidential campaigns and two Speaker of the Senate candidates contesting for positions in the Associated Students of Colorado State University discussed the student government’s need for transparency and how they would improve the culture of ASCSU, should they be elected.

The presidential and vice presidential candidates referred to ASCSU’s tendency to focus on internal matters and how the student government could improve transparency within the organization and with students.

Presidential Candidate Tristan Syron and his running mate Kevin Sullivan said ASCSU is too internally focused and does not react to the needs of students.

Presidential Candidate Liam Aubrey said the tendency for the organization to be self-focused was the most prevalent issue in ASCSU.

“I know with the water bottle bill that was recently passed, there was a clause in that to make sure that there were plaques that had our names on them, and at the end of the day, it is not about us,” Aubrey said. “It is about understanding the needs specifically of the students, and there are a lot of challenges that we face with that, but the communication needs to change. I think we can do a lot more to not only communicate to the students but how the students (can) communicate better to us.”

Presidential Candidate Jacob Epperson and running mate Carter Hill campaign said they would like to improve the transparency of the student fees by keeping students updated on where their student fees are being spent.

“Often times, what happens in ASCSU doesn’t get relayed to the students at all,” Hill said. “Students don’t know how their student fees are being (allocated). A lot of times they’re going to places they don’t know about, so (we want) to increase that communication to students and increase that transparency.”

The next debate will occur March 28 at 7 p.m. in the Lory Student Center Theatre.

Speaker of the Senate Debate

Sherif said she would aim to change the culture of the Senate by making the space more safe and supportive of different perspectives.

“I personally don’t believe in giving people a voice,” Sherif said. “I believe in creating a space in which they can speak for themselves authentically because often times we have people who exist in communities and cultures on our campus that are not allowed to speak up for themselves and are silenced.”

Amundson said he plans to change the internal culture of the ASCSU Senate by requiring senators to do community service.

“It’s not enough to just be in the Senate talking about issues,” Amundson said. “We can talk all we want, but if we’re the ones actually out there making the change, that’s what’s most important. I think that we can change the culture of the Senate to where we serve others rather than asking, ‘Hey, do this for me,’ … so I think ultimately service is a big way we can change the internal culture.”

Sherif said the role of the Speaker of the Senate is to create a space for all members of campus to feel comfortable expressing their opinions.

“The role of this position is to moderate, facilitate and above all, create a safe environment feel like they can speak up about issues that they feel like they might not have been able to formally speak up about and create an environment where all sorts of diverse members of this campus can come in and get representation to match the diversity we have on this campus,” Sherif said. “We really need our representation to be as diverse and inclusive as the members of the campus we’re trying to serve and trying to represent.”

Amundson said he would want to encourage diverse perspectives in the Senate by focusing on what the Senate has in common instead of what their differences are.

“Diversity is really talking about how different we are, and it’s important to celebrate that we are different and to notice that we are different, but as Speaker of the Senate, I would focus on … what do we have in common, not what do we have that’s different,” Amundson said. “I think that diversity should be celebrated … but at the end of the day, we have to focus on what we have in common. That’s what’s most important and that’s how we solve issues on campus.”

The next debate for the presidential campaigns and the Speaker of the Senate candidates will occur March 28 at 7 p.m. in the Lory Student Center Theatre and will be moderated by a reporter from Rocky Mountain Student Media Corporation and broadcast on CTV Channel 11.