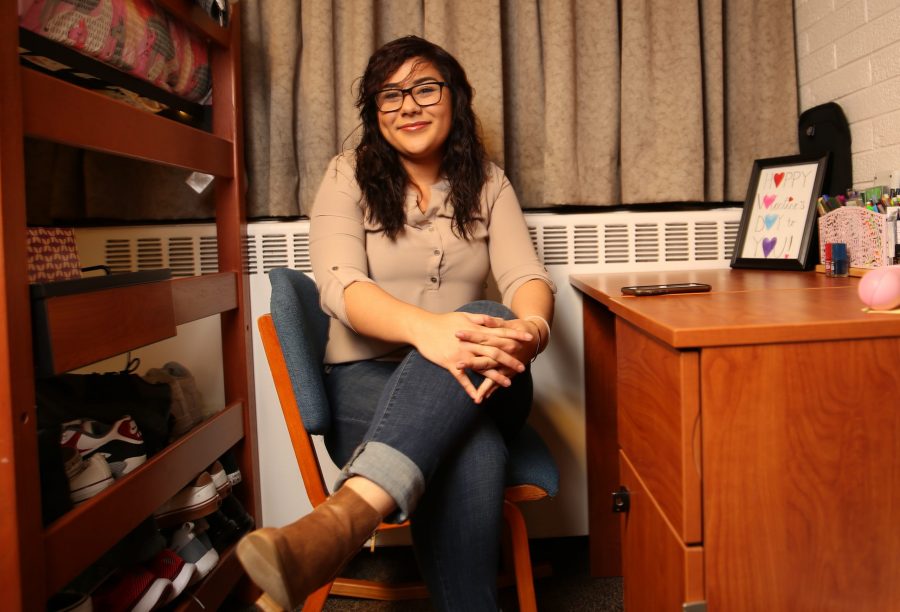 Colorado State University freshman Ashly Berumen poses for a portrait inside her dorm room on March 6. Berumen is currently enrolled in the DACA program, but her enrollment expires in September 2018, so she is seeking to renew her status before then. (Forrest Czarnecki | The Collegian)

Editor’s Note: The Collegian is starting a section in Spanish for our Spanish-speaking readers. Articles in Spanish will be available online and in print. Find the Spanish version here.

On any given day,  Ashly Berumen, a freshman studying human development and family studies, said she lives in a constant state of fear.

While the Supreme Court of the United States delayed the March 5 deadline to renew her application for the Deferred Action for Childhood Arrival, or DACA, program, Berumen, a recipient of DACA, said all she can do is hope for the best.

“You feel like you’re being diminished. You feel like you’re not worth as much as the next person, (so) in other words, you feel like an alien, or an outsider,” Berumen said. “I always live on edge because I’m always worried about what my next move is, or if what I’m doing is right. You’re always wondering if your actions are going to get you in trouble with the law.”

DACA, a program enacted under the Obama Administration, allows minors who were brought to the U.S. as children the opportunity to get a work permit and study in the U.S. Those who receive DACA are eligible to renew their status in the program every two years, but the program does not offer a path to citizenship, according to the New York Times.

For Berumen, her DACA application expires in September, and if she doesn’t have the opportunity to renew it, it can result in the loss of her work permit and scholarships.

“If I don’t go through the renewal process that means that I will get my work permit taken away which would mean that I would lose my job, I would lose scholarships and tuition money,” Berumen said.

Berumen says that part of the reason she lives in a constant state of fear is because there is always a possibility that she could lose everything she has worked for.

With that, Berumen also says that even though undocumented students are always living in a constant state of fear, they have also overcome a multitude of obstacles to get to where they are today.

“Emotionally we are very strong students, especially those of us who’ve worked their asses off to get to college. It’s not easy,” Berumen said. “These students aren’t looking for pity. They’re not sitting on their a**es waiting for an opportunity. These students are fighting for what they want.”

Overall, Berumen says that even though she lives in a constant state of fear, she is proud to be where she is today.

Collegian reporter Jorge Espinoza can be reached at news@collegian.com or on Twitter @jorgespinoza14.