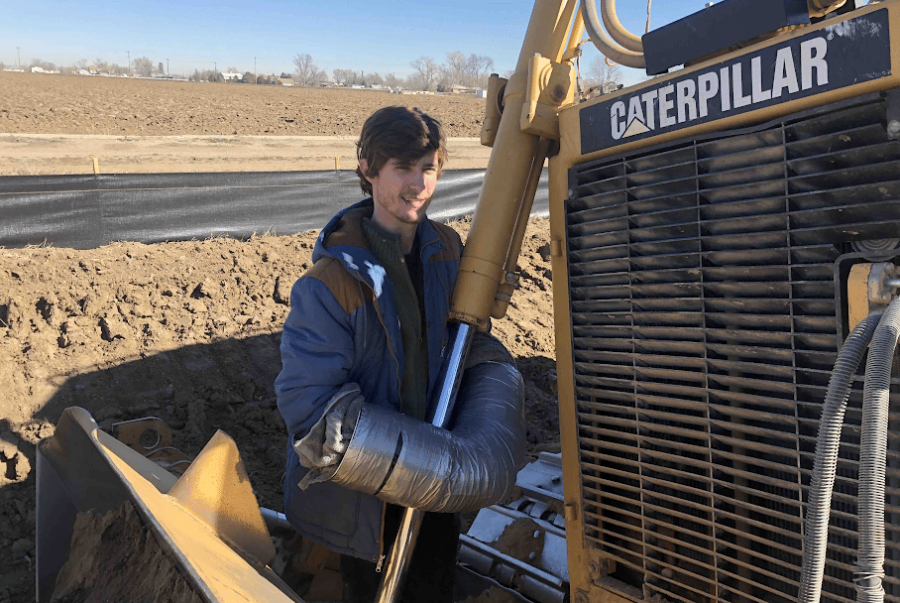 Editor’s Note: Cullen Lobe was a former columnist for the Collegian opinion desk.

Authorities arrested a Colorado State University student in Greeley the morning of March 8 when the student and a group of protesters stepped onto the construction site of a fracking company.

A CSU student spent 12 hours in jail after he chained himself to an oil and gas company’s property in protest.

Authorities arrested Cullen Lobe, a CSU junior studying journalism and environmental affairs at CSU, the morning of March 8 in Greeley. He and a group of fellow protesters stepped onto the construction site of a fracking company.

The group went to protest a fracking project by the Extraction Oil & Gas Company. Lobe protested by chaining himself to the only front end loader  on site.

He was later detained for 12 hours for refusing to leave the construction site, which is located about 1,300 feet from Bella Romero Academy, a Greeley middle school.

According to the Greeley Tribune, the Weld County Sheriff’s Office responded to a trespass in progress at the Extraction Oil & Gas Company site around 9:50 a.m. While several of the protesters walked off the Extraction Oil & Gas Company site, Lobe remained since he was chained to a front end loader by lockbox covered with PVC tubing around his hands, according to the Tribune.

“These companies, when they come in with their pipelines that go over all of our houses and our resources, don’t consider the effect of the people, they just think of the profit,” Lobe said. “People should be the ones in power not these corporations.”

Lobe was taken to Weld County Jail and charged with second-degree criminal trespassing, and other demonstrators received citations for criminal tampering, according to a release from the Weld County Sheriff’s Office.

Lobe said there are several consequences of fracking in communities. Fracking releases methane, a greenhouse gas that factors into climate change, and increases health risks, according to the Proceedings of the National Academy of Sciences.

According to the Fractracker Alliance, children are more vulnerable to these pollutants, and maps show that the drainage from the new fracking site in Greeley would flow directly towards Bella Romero. This further pushed protesters to stop the project.

Extraction had previously planned the project to be near Frontier Academy, another Greeley middle school, but parents took a stand and forced the company to move locations, which led to the project’s new location near Bella Romero.

According to GreatSchools, a nonprofit organization that provides information about primary and secondary schools, Frontier Academy is 77 percent white, with only 20 percent of students considered low income, whereas Bella Romero is 82 percent Latinx and 93 percent of students are from low-income families.

“There’s a big environmental racism problem going on with this project,” Lobe said. “A lot of the parents (in Weld County) are either undocumented or working multiple jobs to support their children, so they don’t want to jeopardize their lives. It’s really important for us to stick up for them because if the parents aren’t in the position to fight and stick up for what they want, then that’s what we’re here for.”

Lobe says that he and the other protesters are giving it their all. They have been fighting back through lawsuits, petitions and protests to show their exigence on the issue. Lobe said he became most inspired after participating in a peaceful rally back in February, which involved 40 protesters.

“Just seeing the faces of the people at the school and their families was a really inspiring moment, to see their support,” Lobe said. “Then seeing (Extraction) come out with their equipment… the combination of urgency and seeing these kids and parents and realizing that they are just humans and that we all need help, we all need to come together and fight to protect what we have left.”

Lobe said he knew the risk of chaining himself to the front end loader, but said it would be worth it. He said he hopes to inspire others to take a stand and to not fear the big companies.

“Fear is what they want you to have,” Lobe said, “If you just stay true to yourself, to the people, and educate yourself, then fear shouldn’t be one of those overlying emotions in how you act and how you go about yourself.”