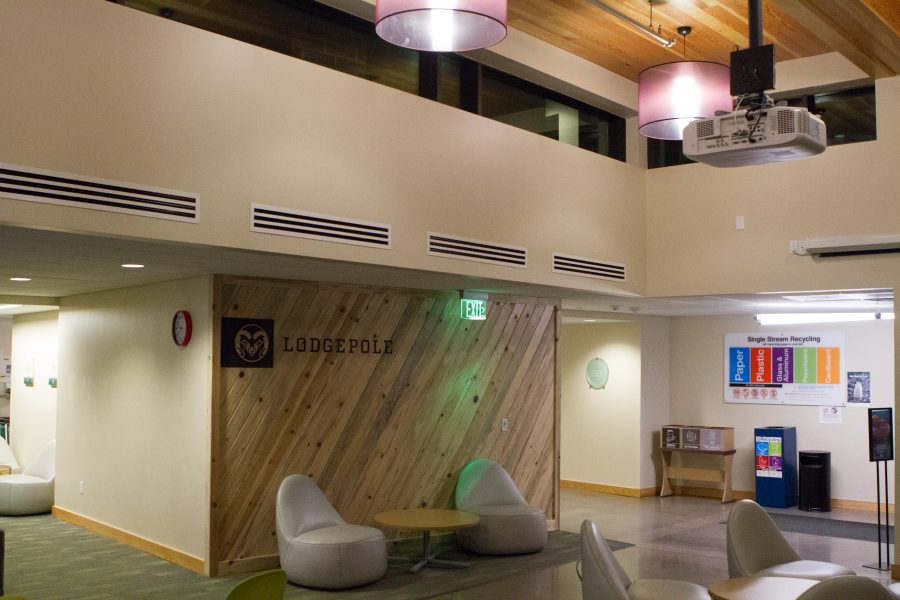 A flood in Aggie Village has displaced several apartements of students. The flood was said to be caused by a broken sprinkler head. (Josh Schroeder | Collegian)

Some residents had to move out of their apartments after a fire sprinkler head unexpectedly went off and caused unlivable water damage.

A fire sprinkler on the third floor of the Cottonwood building in Aggie Village Apartments went off March 2, flooding the third floor and causing water damage to the second and first floors. Seven residents had to move out of their apartments due to the damage.

According to Mari Strombom, interim executive director of Housing and Dining Services, the seven students, who were all from two apartments, were relocated or displaced. The anticipated cost for all of the services and repairs needed as a result of this sprinkler head activation is $30,000.

“I believe three of those students were able to return to their apartment this weekend, and the other four remain in temporary housing within Aggie Village until repairs to their apartment can be completed,” Strombom wrote in an email to The Collegian.

Samantha Brewer, a sophomore music major who lived in a four-bedroom apartment on the first floor in the Cottonwood building, said the water was everywhere in her apartment and it is still not livable.

“We had to change everything and it is sad,” Brewer said. “I mean, at least there is only a month left for school. So it is not like a very long time that we have to move out. But it stings because we lived here and we don’t anymore.”

Since the sprinkler head was activated, Housing and Dining Services Facilities staff and outside contractors have been working to clean up, mitigate damages, dry out the impacted areas, order needed parts and complete repairs, Strombom wrote.

“With water damage, it is critical that everything that was wet be given time to dry completely before any repair work is done so that we do not have any issues in the future as a result of this incident,” Strombom wrote.

Strombom wrote when the sprinkler head activated, the emergency notification response system at Aggie Village acted as intended and Poudre Fire Authority, CSU Facilities and Housing & Dining Services Facilities all responded and were able to determine that it was not activated by either smoke or fire.

“So we are working with a contractor to determine if it was a malfunctioning sprinkler head or if it was somehow (either intentionally or unintentionally) activated by an individual,” Strombom wrote. “We are still awaiting the results of their investigation.”

According to Madeline Noblett, public affairs and communications manager of Poudre Fire Authority, following PFA’s standards for emergency response, firefighters were dispatched to Aggie Village following a report of a fire alarm activation in the building at about 9:15 p.m. When they arrived on scene, people were evacuating.

“Based on initial information, including reports of a possible “haze,” (possibly the mist from the sprinkler head) the first-arriving engine crew called for more resources, out of an abundance of caution,” Noblett wrote in an email to The Collegian. “There was no confirmation there was a fire.”

Firefighters did find that a single fire sprinkler head activated on the third floor in the four-story building, Noblett wrote.

“As of March 16, PFA was still investigating why the sprinkler head activated,” Noblett wrote.

Firefighters worked to clear water from some rooms on the first, second and third floors. There were no reported injuries.

“Contrary to common misconception, not all sprinkler heads in a system go off at the same time when one is triggered. These dynamic systems are designed in such a way as to minimize damage and quickly and effectively put out a fire,” Noblett wrote. “In past Fort Collins cases, one sprinkler head was able to put out a fire before our firefighters got on scene, saving lives and property.”

According to Noblett, PFA reminds people of the following information in regard to fire sprinklers:

Never throw anything, such as a football or Frisbee, around a fire sprinkler head, as they could be damaged and not function properly.

Don’t hang anything from a fire sprinkler head, such as clothing or room decorations.

If you live or work in a building with fire sprinklers, and you notice that a head appears to be damaged, immediately report that to your building’s facilities maintenance team.

Collegian reporter Yixuan Xie can be reached at news@collegian.com or on Twitter @yixuanxie1.