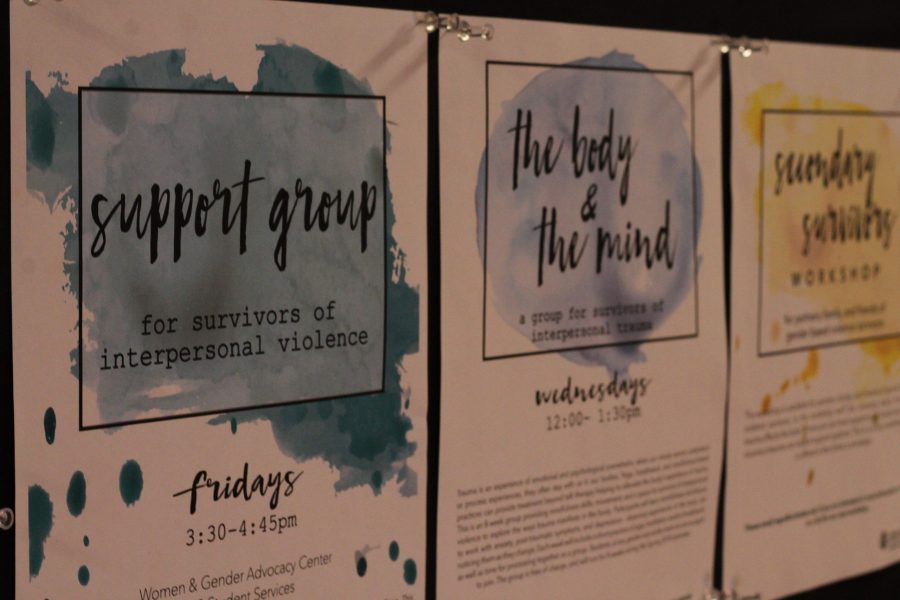 Posters advertising a support group for survivors of interpersonal violence hang in the sociology hall of the Clark B building. (Seth Bodine | Collegian)

For survivors of interpersonal violence, forming strong support systems can be a critical tool for coping with and recovering from trauma, according to the Women and Gender Advocacy Center.

Groups are open to Colorado State University students of all genders, and participation is strictly confidential so members can expect to remain anonymous.

The Support Group, held every Friday, 3:30-4:45 p.m. in Student Services Room 112, is open to any survivors of interpersonal violence such as sexual assault, stalking and/or relationship violence.

As of this school year, the group is now open to students of all genders, as it was previously limited to female-identifying students.

Survivors can share their stories and advice during the weekly discussions, as well as make new friends. Unlike a therapy group which focuses strictly on recovery, the support group encourages members to form connections.

“Survivors can find it a struggle to talk or open up to those without the experiences of interpersonal violence,” said Casey Malsam, assistant director of victim services for the WGAC. “This group is a chance for survivors to find people with common experiences.”

Each session is facilitated by two WGAC victim advocates who provide conversation guidance when appropriate. Otherwise, there are no guidelines or strict topics of discussion.

A short 20 to 30 minute intake session with an advocate is required before joining the group.  Afterwards, members can drop-in whenever they feel like.

“Sometimes we won’t see a member for several months, but they might come in if they have a bad week,” Malsam said.

The three-hour Secondary Survivors Workshop provides loved ones and supporters of primary survivors of gender-based violence a chance to connect with other secondary survivors and learn about the many impacts of trauma.

The first workshops were hosted last semester after the WGAC recognized there was no group for secondary survivors.

“People need support even if they are supporters,” Malsam said. “Group support is a big piece for primary survivors, so we wanted to provide that for secondary survivors as well.”

Secondary survivors may experience vicarious trauma if someone they care deeply about experienced trauma. Their trauma can include: additional anxiety, guilt, and moments of hypervigilance, where they overwhelmingly notice every sensory detail around them.

The workshop covers topics including how vicarious trauma affects the brain and support systems, and how to support primary survivors. It also functions similarly to the primary survivor support group in that it connects secondary survivors with those they may share experiences with, according to Malsam.

The next workshop is scheduled for April. The class size caps at 12 people, but there is still space for those who wish to sign up.

The Body and The Mind

This eight-week course is designed to teach survivors of interpersonal violence how trauma, stress and depression manifest in their bodies as well as how to mindfully address those issues.

“The goal is to help survivors build the skills they need to deal with physical trauma and bring their bodies back to equilibrium,” Malsam said.

Created last semester, the group is a collaboration between the WGAC and the Counseling Center.

Every lesson includes exercises in yoga, breathwork or meditation followed by time for group processing, according to Jessica Morneault, program coordinator and the advocate co-leading the group this semester.

People of any physical ability level are encouraged to join, as exercises can be adjusted as needed.

Those who wish to join are advised to contact either WGAC or Morneault.

A short intake session with an advisor is required before attending, and the WGAC asks that attendees commit to coming for the full eight weeks in order to complete the entire curriculum.