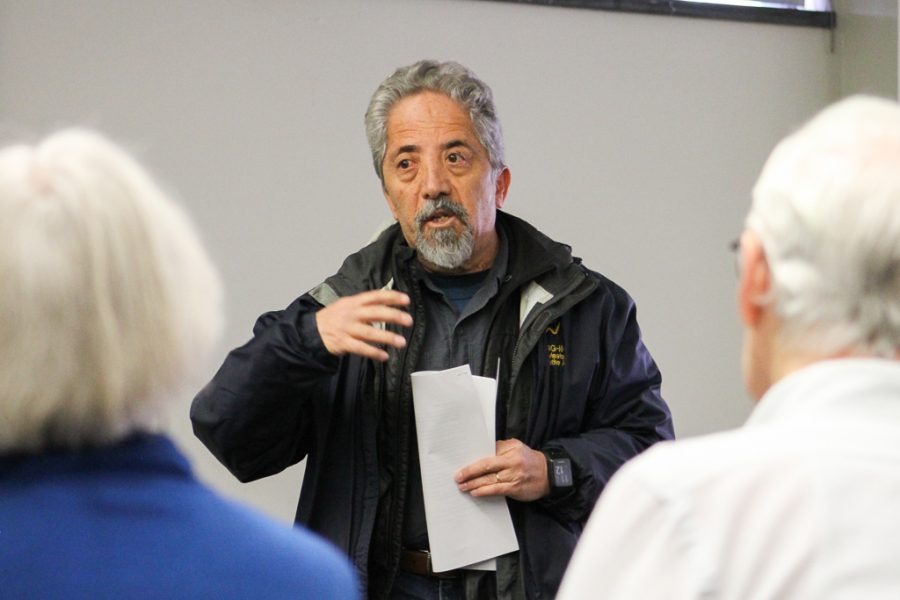 State Senator John Kefalas speaks at a monthly Community Issues Forum at the Old Town Library on Feb. 24. The forum focused on the new federal tax bill and how it affects Colorado citizens and businesses. (Ashley Potts | Collegian)

The Tax Cuts and Jobs Act was the topic of the monthly communications issue forum held by Sen. John Kefalas and Reps. Jeni Arndt and Joann Ginal on Saturday, Feb. 24.

Introduced in December of 2017, the TCJA act, created by the Trump administration, introduces several different reforms to “both individual income and corporate income taxes and would move the United States to a territorial system of business taxation,” according to an article on the Tax Foundation website.

In a presentation by Elizabeth Cheever, the economic policy analyst for Colorado Fiscal Institute, the effects of the TCJA and how the new policies will effect Colorado was discussed with community members.

One of the majorly discussed topics revolved around getting the facts straight about what the TCJA does and does not do.

While there was a lot of circulation and speculation surrounding the bill, Cheever laid out what the TCJA does not do to, or for, the public.

This last point has been a hot button issue for many graduate students across the nation, with many “breathing a sigh of relief,” when they realized it wouldn’t happen, explained an article by NPR.

“I feel like graduate students have a hard time paying for rent in Fort Collins. It’s really hard for grad students who are trying to not take out loans,” Lammers said, adding that, at the time, she was worried that students who received lower stipends would not be able to continue to attend grad school.

Lammers explained while it will not happen, graduate students must continue to fight for themselves.

I think it’s wonderful it’s not going to happen, but we need to continue to advocate for ourselves at the state and federal level,” Lammers said. “The federal government needs to understand that graduate students really matter and are really producing a lot of work for their universities.”

After explaining what will not happen, Cheever explained what would happen with the new tax reform.

The law will repeal the Affordable Care Act individual mandate in 2019, meaning that 13 million fewer Americans will be insured with health care with a 10 percent additional premium increase.

The law will expand the use of 529 college savings accounts to include kindergarten through 12 grade private school tuition. There will be further restrictions on disaster deductions to losses, incurred only when the president declares what is and is not a disaster area.

Finally, the reform will eliminate tax incentives for private employers that subsidize their employees’ commuting expenses.

After the end of the presentation, Rep. Arndt and Sen. Kefalas spoke with the crowd about

their thoughts on the bill with the community.

Arndt explained the goal of the meeting was to inform the public on how this new federal tax law will work with the state tax law.

“I hope (the community) is better informed,” Arndt said.

Sen. Kefalas stated he and the representatives took turns deciding what they wanted to address.

“On a personal level, I’m hoping that this information will encourage people to file their taxes properly,” Kefalas said.

Cari Brown, systems advocacy specialist communications coordinator for The Arc of Larimer County, said she attended because she knew the tax bill had a lot of implications.

“I came out to learn more about exactly what that would look like,” Brown said.

Cheever stated the overall goal of the meeting was to get good and reliable information out to the community.

The federal tax bill is complicated and I think it’s important that people  know what’s in it and what it means for Colorado.”- Elizabeth Cheever

Those looking for further information and details about the tax reform and how it will affect Colorado can watch the entire presentation on the Colorado Fiscal Institute website.