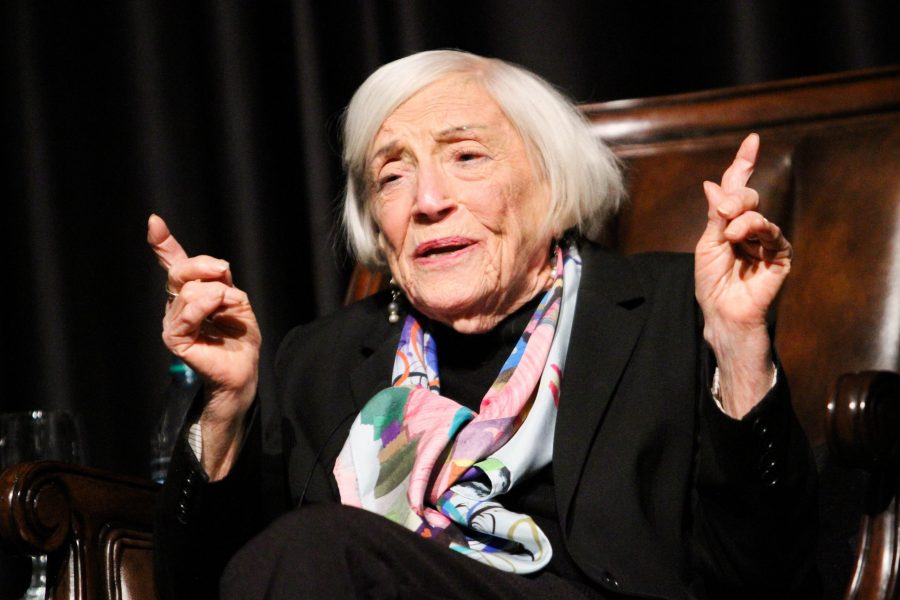 Marthe Cohn, a survivor of the Holocaust, speaks about her experiences as a French spy during WWII at CSU on Feb. 21.

The crowd rose to their feet in a rousing round of applause as Marthe Cohn, the guest speaker for Colorado State University’s 20th annual Holocaust Awareness Week, took the stage Wednesday night.

Cohn, a 97-year old French native was a spy for the Intelligence Service of the French First Army.

Cohn gave her story to the community in a touching speech in the main ballroom of the Lory Student Center, as well as in a interview with the Collegian, CTV  and KCSU on Wednesday morning.

Cohn was born in Metz, France in 1920. Growing up, education was emphasized for Cohn in a time when education would not have been.

“All seven, we had the best education we could get. For my parents, it was extremely important,” Cohn said. “We were not rich, we were comfortable. (My brother) helped us and he financed everything. I was in school during the war which was not permitted. We had no right to be in school, but I was in school anyways.”

When the Germans invaded France, Cohn’s sister was eventually arrested and taken by the SiPo, a Nazi military police force.

After plans were made to free her, Cohn’s sister refused to escape, and later Cohn found out that she had been sent to multiple camps, and eventually Auschwitz, where she disappeared.

“We don’t know how she died, we don’t know anything,” Cohn said. “We know that she never came back.”

Cohn explained to the crowd she liked to honor her sister before telling her story.

Before joining the army, Cohn trained and finished school as a nurse.

Cohn went on to explain that she joined the Army in November of 1944, where she eventually was assigned to the 151 regiment of the French Army.

Cohn became a member of the Intelligence Service of the French First Army when she met the Colonel of her regiment, Pierre Avia, during a lunch.

After the two talked about Cohn’s ability to read and speak German, the Colonel explained why the Intelligence Service needed her as a spy.

“He explained to me in Germany, all males from the age of 12 to old age are in uniform,” Cohn said. “So any men in civilian clothes walking the streets of Germany would be noticed and arrested.”

After 13 attempts to cross the border into Germany, Cohn was eventually successful on try 14, where she crossed the border through an area in northern Switzerland.

The first time she crossed, she was told to crawl behind a patch of bushes and wait for two sentinels to turn their backs, and walk in between them into the country and to the east, as there was no barrier between the countries.

“Once lying behind those bushes, seeing the sentinels come and go, I absolutely, frantically, desperately didn’t want to go,” Cohn said.  “I felt that no one had the right to make me go. I felt very sorry for myself. It took me an extremely long time to overcome the fear.”

Cohn explained in her interview she overcame this fear to prove to her officer that she both could and wanted to do the mission.

Once in Germany, Cohn was able to gather vital information about retreating German forces by posing as a German nurse looking for her Nazi husband. She gathered information from several German officers, including one she helped heal with her years of training as a nurse, even though he boasted of his atrocious acts against Jewish people.

He said he could smell a Jew from a mile away. Apparently that morning his smell(ing) was pretty bad.”-Marthe Cohn

The crowd reacted with applause as Cohn finished her story.

Lawrence Horowitz, a jewish student at CSU, said he attended because it was part of his history.

“Hearing about it first hand is something that is really inspirational,” Horowitz said. “I love to be a part of it and be able to witness it while holocaust survivors are still around.”

Rabbi Yerachmiel Gorelik hopes those at the event walk away recognizing they can do a lot more than they think they can.

“We don’t just recall the massacre we also recall the positive effects,” Gorelik said. “That memory of those who were murdered translates into positive action.”

Momo Yohn, one of the organizers of the event, said she thinks the fact that it gained so much attention without any issues showed a lot of unity and a lot of peace.

Denise Negrete Peters, the president of Students for Holocaust Awareness, said it is important for anybody to see a survivor tell their story first hand.

“It’s very important for us to never forget what happened,” Negrete Peters said. “This is a way to strengthen our remembrance.”

Cohn hoped to pass along the spirit of engagement and fighting spirit for the future, especially for younger generations.

“To the children and younger students, be engaged,” Cohn said. “Never accept an order that your conscience refuses.”