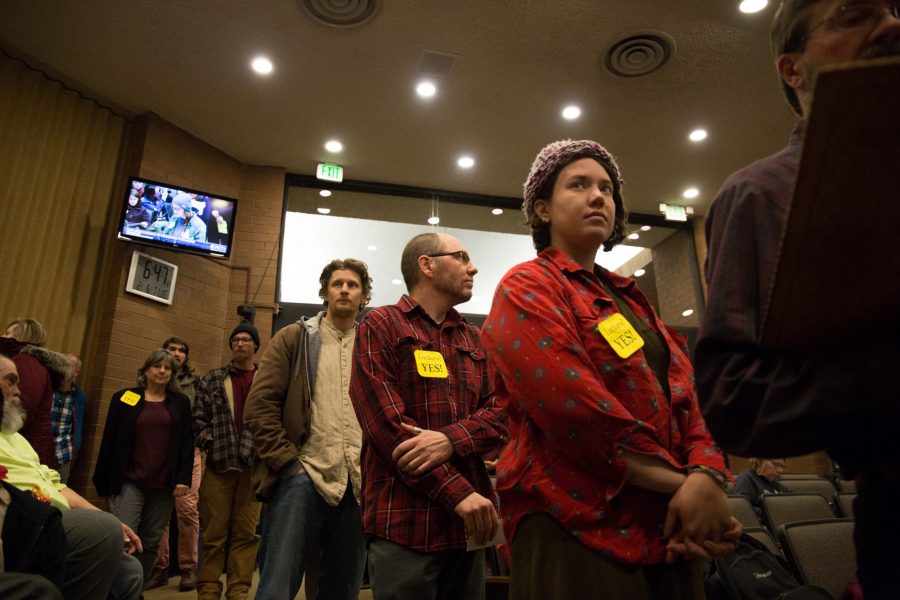 Macy Dallas waits in line to speak out about the new lockers during the Fort Collins City Council meeting February 6, 2018. (Anna Baize | Collegian)

The City will not be funding lockers at the Fort Collins Mennonite Fellowship for the homeless population.

A motion to provide roughly $10,500 for the locker program at FCMF failed six to one at Tuesday night’s Fort Collins City Council meeting. Councilwoman Kristin Stephens was the only councilmember who voted in favor of the measure because of how it would help those who are homeless have a better chance of employment.

“To me, it comes down to real empathy and compassion for the people who are struggling in our community,” Stephens said. “I would like to see them be able get work, to … walk around … without a big pack and the (stigma) that comes from doing that.”

Although the City Council acknowledged the need for and benefits of the locker program, it was rejected due to concerns about the lockers’ location and concerns that the program did not work together with other homeless resources.

“I don’t think lockers, by itself, is a step up to solving homeless problems or getting jobs–I don’t buy that,” said councilmember Ray Martinez. “As this (program) stands alone, I don’t see how you could prevent the foods, the drugs, getting into lockers…. I’m not sure a missionary can be a policeman.”

“I don’t think (the current proposal) meets the standards for what we’re trying to do, and it’s nearly a project doomed to failure,” Horak said.

The one-year pilot program would install 20 lockers on the outside of the FCMF, located at 300 E. Oak St., and could be accessed 24/7 by their assigned locker guests, homeless applicants who would use the lockers to store their belongings.

The idea originated in spring of 2017 when the City Council asked City staff to look into providing lockers for the homeless which could be accessed 24/7.

FCMF volunteered their space and wrote a proposal for the program wherein church staff would interview applicants and supervise the lockers.

However, in January, City staff recommended Council not fund the program.

Staff based their recommendations on safety concerns from neighborhood residents, research of similar programs in other cities who failed, and a suggestion that the money could be used more effectively in other homeless prevention or pathway out programs.

Those concerns were echoed during the citizen comment portion from those who opposed the lockers. Much of the opposition emphasized the potential safety risk from increased transient activity in the residential neighborhood.

Many of those who spoke in favor of the lockers said the lockers filled a serious need in the homeless community and would help people get and keep jobs.

After the proposal failed, many of its supporters expressed great disappointment.

“I think City Council really had an opportunity and they passed on it,” said Lynn Thompson of the Fort Collins Homeless Coalition.

Michael Ranieri, FCMF homeless outreach director, called the outcome bogus, though he mentioned that the church might still self-fund the lockers themselves, perhaps through a Kickstarter, now that they knew they had the support.

“I don’t even know why (Council) dragged this (issue) back out here,” Ranieri said. “It kind of seems like a lot of them had their minds made up (going into it).”

Larson Ross, a senior political science major at Colorado State University, said while he understood that neighborhood residents worried about safety, there is already crime in the FCMF area due to a failure of the City to provide proper resources, and 20 lockers would not exacerbate the issue.

“I think this would’ve been a step toward a larger (homeless) solution, and I think that kind of got lost in the conversation,” Ross said.

Steve Ramer, pastor at FCMF, compared a holistic homeless program to a puzzle built of many pieces and said the church .

“If we’re going to really try to effectively address the needs of the poorest in our community, we’re not going to solve it with 20 lockers, but it’s part of the puzzle,” Ramer said.