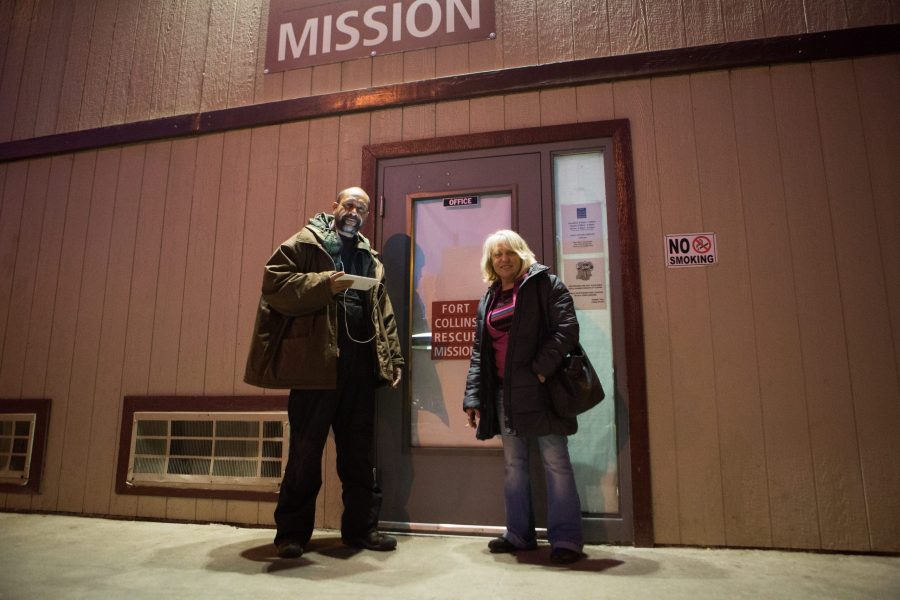 Becky Kearns and Leviathan Woodley are two Fort Collins residents that are excited about the new lockers being put up at Mennonite Fellowship Church. "It's harder to look for a job when you are carrying all your stuff... That's going to be a blessing to us" Kearns said. (Tony Villalobos May | Collegian)

The mission for homeless lockers continues as the Fort Collins Mennonite Fellowship looks to self-fund lockers to put outside their building, located at 300 E. Oak St.

The church has opened a GoFundMe, currently with a $8000 goal. Given the high level of enthusiasm for the project, though, that goal may rise to $10,000, according to Steve Ramer, FCMF pastor.

Ramer said they have also applied for grants with various philanthropies and plan to collaborate with other local groups such as the Fort Collins Homeless Coalition to raise locker funds.

Money will go toward buying 20 lockers, an awning, additional lighting and a security camera for the area and paying church staff to manage the lockers. The church also plans on painting a mural on the locker wall to fit the church’s messages of goodness and God, according to Ramer.

Previously, City Council voted against funding the FCMF proposal to provide 20 lockers with 24/7 accessibility for homeless guests. The decision came from almost a year’s worth of input from City staff and nearby neighborhood residents who opposed the lockers mainly due to safety and logistical concerns.

Locker supporters, however, were vocal throughout the process as well, and expressed great disappointment with the Council’s decision.

Michael Ranieri, FCMF homeless outreach director and proposed manager for the lockers, said in the midst of the Council decision, the church talked about funding the lockers themselves.

When Ramer received a call from a local citizen who wished to donate $3000 to the project, that was when the idea became a mission.

Once I heard that somebody wanted to donate $3000, I was like ‘Whoa, this is gonna happen.’ It was like a confirmation that this is going to happen, and that the City can’t stop this, and the people can’t stop this.” – Michael Ranieri, FCMF locker manager

“Once I heard that somebody wanted to donate $3000, I was like ‘Whoa, this is gonna happen,’” Ranieri said. “It was like a confirmation that this is going to happen, and that the City can’t stop this, and the people can’t stop this.”

Since then, the church has received a $1000 check and the GoFundMe has raised nearly $600. The decision to self-fund was approved by the church’s congregation and leadership Sunday.

“I think it is more inspiring that we’re doing (the funding) ourselves, rather than relying on the City, (where) it seems like people aren’t their main priority sometimes, especially people who don’t have so much money or aren’t customers,” Ranieri said.

Locker policies will adhere to the guidelines submitted to the City. No drugs, food or weapons will be allowed in the lockers, each locker guest will be screened and interviewed before receiving a key, and guests will have their locker for three months.

At their Sunday meeting, church leadership mentioned they might do quarterly evaluations to ensure the lockers are fulfilling the needs of those using them.

Cody Nelson, a citizen who is eligible get one of the lockers, said it would be incredible to have a secure place to store personal and professional belongings, while also having 24/7 hour access to them–something the lockers at the Murphy Center lack. Nelson said it is challenging to manage job hours when commute and overtime do not align with limited locker hours.

“It would be a sense of wonder and freedom for us to not have to carry (backpacks) around,” Nelson said.

According to Ramer, who is part of FCHC, FCHS has been advocating for more accessible lockers for the homeless for the last three years. Ramer said FCHC put pressure on Council last spring, resulting in Council asking City staff into the locker situation.

“The idea was the City needs to be responsible for all of its citizens, and that means providing for the homeless,” Ramer said.

In the end, FCMF was the only organization to offer their space for a locker project, and now they plan to continue, despite the City pulling out.

“We didn’t start out advocating for lockers with the hope that we would put lockers up (at FCMF),” Ramer said. “It was because no one else (did) that we finally said, ‘Well, let’s try it here.’ Now we’re here.”