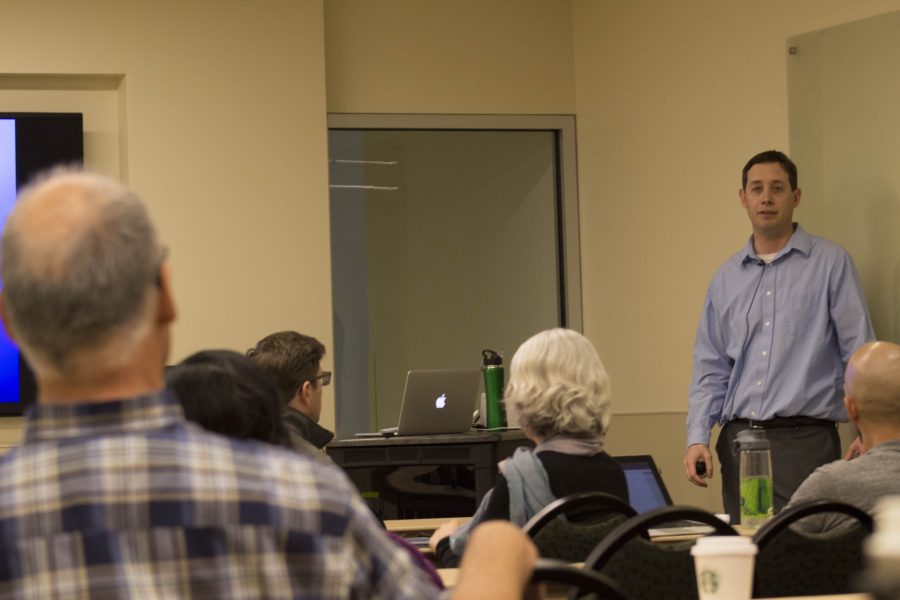 According to Daniel Birmingham, Ph. D., racial minorities and students from low-income communities are at a disadvantage in science classes.

Birmingham, a CSU assistant professor for the school of education, approached issues of classroom practices, specifically those that address systemic barriers for racial minorities and low-income families, and how these issues can be changed through equitable education at the Practicing Racial Justice Research Colloquium Tuesday afternoon.

The event was hosted by the Colorado State University School of Education’s Center for Racial Justice Research and Advocacy.

Birmingham has worked with youths as a science teacher and through Boys & Girls Clubs. He said he is committed to working with youths and educators to design for a more inclusive learning environment.

According to Birmingham, students from lower income families and students of color experience science from a distanced perspective, which leaves students with the idea that they are not welcome in science or that they cannot gain success from science.

“The kids that I work with consistently remind me of the urgency of now,” Birmingham said. “What we’re seeing in research is that youth from lower income communities of color … (are) positioned in contrast to normative values in sciences classrooms.”

Birmingham said that this dissociation is a result of factors implemented as a consequence of the cultural system, perpetuated both internally and externally.

In addition, there is a lack of participation in classrooms and access to science for underprivileged students, and they are thus at a disadvantage, Birmingham said.

One of the students Birmingham worked with at an external science program was a student in Michigan named Jonathan. Birmingham began working with him at the age of nine.

Birmingham said he noticed that Jonathan and other students he worked with experienced science positively outside of the classroom where they could apply their connection to science to their community as opposed to applying science in the classroom.

“We really need to rethink what learning looks like in (the) classroom,” Birmingham said.

Jonathan created a video for a competition to leverage his scientific knowledge with help from Birmingham, and Birmingham said he noticed a huge difference in his comprehension and information utilization than seen at his school.

Birmingham’s approach to equitable learning environments in science is what he and his team call equitable and consequential high-level practices.

These practices are focused on addressing equity issues by taking advantage of student’s experiences that they bring to the table and addressing systematic inequalities.

“Our work is trying to bridge that divide,” Birmingham said.

Another one of Birmingham’s students, Samuel, said that his community lived in a library desert, Birmingham said.

Birmingham said that when students were asked why science matters, their response was related to the pass or fail system.

Birmingham said he has incorporated community by including transformative and tangible outcomes into the curriculum and by bridging barriers in science classrooms has created equitable classroom environments.

“We take the stance that youth lives, interests and cultural knowledge … are crucial elements of how students and teachers may … engage disciplinary knowledge substantially and with agency to make a difference in their lives,” Birmingham said.

Collegian reporter Audrey Weiss cn be reached at news@collegian.com or on Twitter @Audkward.