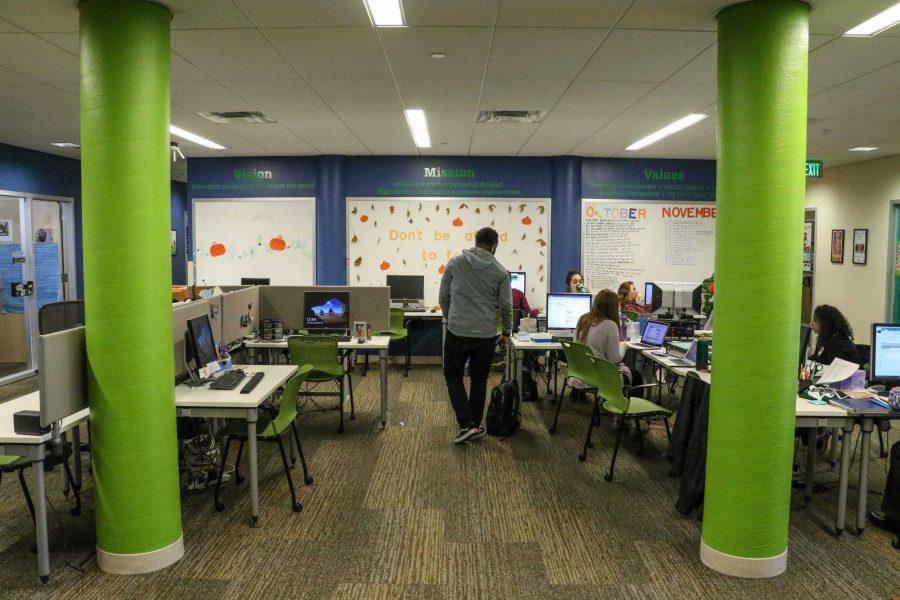 People typing away in the SLICE office. (Kasen Schamaun | Collegian)

The new organizations include:

Julie Koffler, the president of the Fermentation Society, started the club along with several fellow transfer students this year. Koffler said she started the club to get to know other people in her major and practice fermenting outside of class.

“Anyone who’s interested in any type of fermentation, such as making Sambuca or pickling things, we can definitely help people out with that,” Koffler said.

Koffler said her club has a wide range of activities planned for this semester, such as going on brewery tours and hosting guest speakers.

Another new student organization is Curiosity Saves the Universe.

“I wanted to sow people the idea that it just takes a bit of curiosity to shift ideas towards different things and change how we view what happens in the world because business as usual doesn’t work so we need to think of new ways to solve problems, and I feel like curiosity will be the answer to it,” said Sean Washington, president of Curiosity Saves the Universe in an interview with the Collegian.

Washington pointed to examples of how curiosity has caused a paradigm shift in the past, such as when divers first discovered coral bleaching in the ocean or when Edison created the lightbulb.

Washington said his club plans on doing different trips, in which one is going to the Denver Aquarium and also plans on hosting events such as the Carnival for The Corals, where they plan to teach people about coral reefs and coral reef bleaching.

Many of Curiosity Saves the Universe’s members are biology majors with an interest in environmental sustainability but is open to people of all majors.

The Logging Sports Club has a rich tradition dating back to the early 1990s, but is reinventing itself this semester with a host of new activities and competitions.

“A lot about this club is not just about the sport but it’s also about maintaining those historical ties moving forward,” said Ethan Doyle, president of the CSU Logging Sports Club

Doyle said they practice in six main events that include chopping events, sawing events, and chainsaw events. They also take part in cultural events such as caber toss, axe throwing, and log rolling. Doyle also mentioned that his club is a competitive sports club and meets three times per week.

“In this club, there’s something for everyone, people tend to thinking that you have to be this big hulking man,” Doyle said. “But, in contrast there’s some events where if you’re bigger, smaller, man or woman, whatever it may be, you will have different advantages and skills.”

Collegian reporter Danny Sonnenberg can be reached at news@collegian.com or on Twitter @dannyjsonnenberg.