CSU professors discuss if the wolf is friend or foe 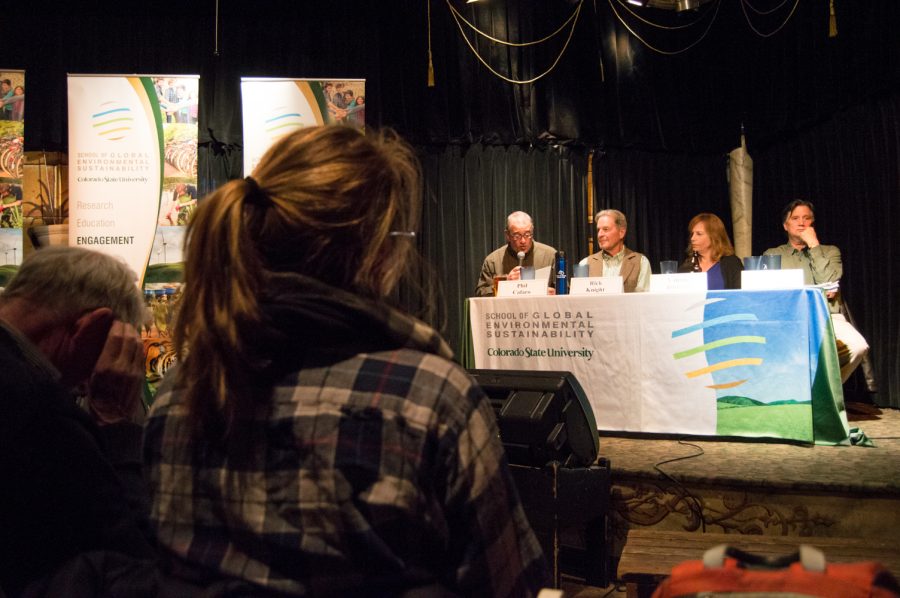 Opposing opinions were heard in a panel that opened the conversation about the reintroduction of wolves in Colorado.

On Wednesday night Avogadro’s Number was the place where four panelists sat together and discussed the implications, both rural and urban, of reintroducing America’s most controversial species, the wolf.

“The last thing America needs are more issues that divide us along our urban and rural boundaries. What we need are things that unite us,” said Rick Knight, professor Emeritus and wolf panelist. Knight taught in the Warner College of Natural Resources and holds his PhD in Wildlife Biology.

The Colorado Department of Wildlife website reports that Colorado’s wild was once populated by gray wolves who maintained a wide natural habitat. The last wolves were killed in about 1940. Alas, for almost 80 years Colorado has been without a sustained wolf population.

Philip Cafaro, wolf panelist, professor of Philosophy and staff sponsor of the new CSU Rocky Mountain Wolf Project said he hoped the panel discussion would create a sense of renewed possibility for creating a better society.

“(In that better society,) we share the landscape with the rest of our state’s native species without hogging it all for ourselves,” Cafaro said.

However, a sense of renewed possibility is not the only thing on people’s minds. A report written by panelist Dana Hoag and his colleague Luke Wagner was passed out at the panel.

“The issue is not just about the wolves, it is about balance,” the report states. “The agricultural community in the Northern Rockies has to deal with this increasing threat to their livestock and their livelihood.”

The stakes between city and rural populations are not the same. Dr. Knight made a simile from a breakfast of bacon and eggs.

Valerie Johnson, a panelist and veterinarian for the Wolf Sanctuary, is aware of tourism.

“Yellowstone is quite a bit different from what we are proposing. How do wildlife and people coexist?” Johnson said. “That in my mind, is the bottom line that we are always trying to figure out.”

The impacts of this issue are wide ranging and will affect many stakeholders, according to the panelists. Colorado is in a unique position.

Collegian reporter Pat Conrey can be reached at news@collegian.com or on Twitter @load_of_crop.