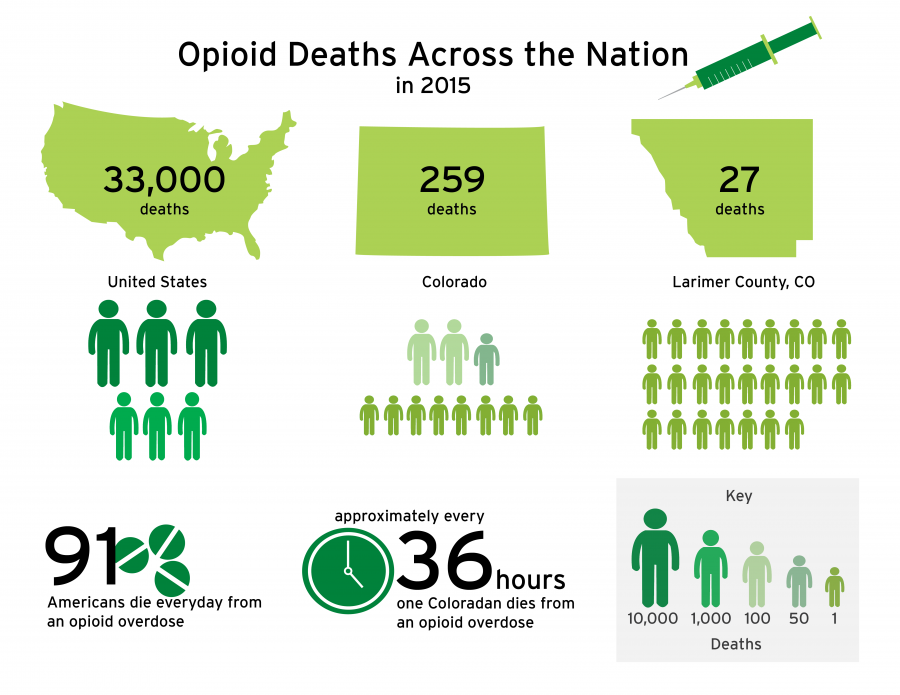 In this infographic, we can see several statistics revolving around the opioid epidemic both nationally, in Colorado and in Larimer County, including total number of deaths as well as daily/hourly death rates. (Infographic created by Meg Metzger-Seymour)

The opioid epidemic reaches all the way to Larimer County, where heroin use has risen steadily and caused overdoses and arrests to increase, according to Lt. Joe Shellhammer of the Larimer County Sheriff’s Office, and the upcoming commander of the Northern Colorado Drug Task Force.

Shellhammer said that he witnessed a dramatic upwards, curve of opioid abusers in recent years and said that overdoses happen weekly, if not daily, while arrests for possession occur almost daily.

The most common opioid use in Larimer County, according to Shellhammer, is heroin with OxyContin and morphine sulfate a distant second.

“Since about 2014, a lot of our drug trends have gone down, and shortly after have begun to skyrocket,” Shellhammer said. “Where we are now … is getting to be unbelievable.”

Opioid drugs can be broken into three categories when looking at abuse and overdoses: Illegal opioid drugs, synthetic opioids and prescribed opiate painkillers.

The most well known and most used illegal opioid is heroin, which is a highly addictive drug where overdoses can cause shallow breathing, coma and eventually death. In an article written by CNN, the national amount of heroin users increased from an annual 404,000 users in 2002 to 948,000 users in 2016, as well as a 533 percent increase in heroin overdose deaths.

The most common synthetic opioid is fentanyl, a drug similar to morphine but is 50 to 100 times more potent, according to the National Institute of Drug Abuse. In a prescription form, fentanyl can be seen in Actiq, Duragesic and Sublimaze. Street forms of fentanyl or fentanyl-laced heroin include drugs such as Apache and China White, among others.

The final category of opioid drugs are prescribed opiate painkillers, which are quite common and include products such as OxyContin, Vicodin, codeine and morphine. These painkillers “act on opioid receptors in both the spinal cord and brain to reduce the intensity of pain-signal perception,” according to NIDA.

Over the last 16 years, the number of opioid deaths in the United States has quadrupled, according to the Center for Disease Control and Prevention. The CDC reported that from 2000 to 2015, over half a million people died from drug overdoses with roughly 91 people dying daily from an opioid-related overdose.

The national trend of opioid usage can be refelcted in statistics from Colorado.

According to the Colorado Department of Health Care Policy and Financing, a total of 259 people died from prescription opioid drug overdoses alone in 2015 compared to 205 homicide deaths. CDHCPF also reported that while the number of opioid-overdose deaths decreased by 6 percent in 2016, the number of heroin-related deaths increased by 23 percent that same year.

While the numbers in Colorado match the national statistics, the total number of opioid-related deaths in Larimer County has grown in recent years, according to the 2016 annual report put out by the Office of the Larimer County Coroner Medical Examiner.

The Colorado State University Health Network follows a very strict set of guidelines for how they give out opiate painkillers, according to Dr. Kathy Waller, the director of general medical services for the CSU Health Network.

“(The) Health Network follows a set of guidelines from the Colorado Department of Regulatory Agencies called the Policy for Prescribing and Dispensing Opioids,'” Waller said. “These recommendations apply to all prescribers, and advise use of the lowest effective dose and quantity. Similarly, the American College of Emergency Physicians recommends the ‘lowest practical dose for a limited duration.’ We are very judicious about prescribing opioids, and generally give only low doses and small amounts for acute pain.”

For students on campus affected by opioid use, they can reach out to CSU Health Network at 970-491-7121 and get in touch with Director of Psychiatry Services Dr. Irena Danczik.

Students can set up a consultation meeting where they will discuss a process of future evaluation, follow-up structure and additional rules of the clinic as well as about medication use if appropriate.

Shellhammer said that those who need to use prescription opiate painkillers use the minimum amount prescribed and educate themselves on the addictive nature of opioids, so that people can take charge of their own health.

“Once control is lost and you have gone from oxycontin and taken your first dose of heroin, that is a gigantic leap and it is really hard to stop that,” Shellhammer said. “The risk for no reward is unbelievably awful.”